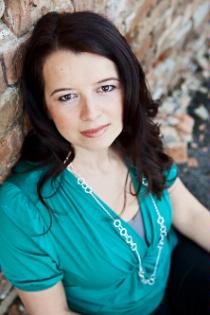 bree despain rediscovered her childhood love for creating stories when she took a semester off college to write and direct plays for at-risk, inner-city teens from Philadelphia and New York. She currently lives in Salt Lake City, Utah, with her husband, two young sons, and her beloved TiVo. You can visit her online at www.breedespain.com.

Lyndsey OHalloran
4.0 out of 5 stars Exciting sequel
Reviewed in the United Kingdom on 11 November 2011
Verified Purchase
The bulk of this book focuses on Grace and her struggle to control the wolf within her. All Grace wants is to be able to use her newfound powers for a good cause and become a Hound of Hell, someone who can really make a difference in a world full of crime. This aspect of the story really shows just what a wonderful character Grace really is. After risking everything to save her boyfriend and taking on a terrible curse herself, she still manages to find the strength to fight for a better cause. Everything is completely selfless with Grace and I loved this about her.

Something that I had a problem with in the first book of the series, The Dark Divine, was the amount of religion added into the story. Now, I have completely changed my opinion on this. While it felt overpowering the first time around, I think that now, it only strengthens some of the characters, Grace in particular. Her religious upbringing really shines through and shows that she really has some great morals. Being brought up the way that she has been, Grace knows that there is a lot of bad in the world but also people can actually do some good and change things and this is why I liked the religion aspect of the book this time around. I think without this upbringing, Grace would have been completely different and would have made different choices.

As Grace is desperate to find her brother Jude, knowing how troubled he is, she manages to get herself in quite a few sticky situations. At the same time, she meets Talbot, a mysterious young man who she is quickly drawn to. With Daniel being as distant as he has been, Grace turns to Talbot to learnt the things she thinks she should be learning. Talbot tends to keep himself to himself and because of this, we don't really get to learn that much about him but I liked that. I enjoyed not knowing what he was really all about and not knowing if he was really trying to help Grace or not. As much as I loved this new character, Daniel really grew on me a lot more in this book. After changing, he shows a completely different side to his character and it was one that I didn't really think we would ever get to see.

I love how this gave the book a more action packed feel to it compared with the first in the series. The whole second half of the book is extremely exciting and I was reading as fast as I could to find out what was going to happen. There are some pretty big twists in this book and some of them I didn't see coming at all. Due to certain events, I was always unsure as to whether I was thinking the right thing or not and I really liked the fact that I couldn't figure everything out immediately. I think that this was mainly down to the fact that I was always unsure about a lot of the characters and this mystery really helped to keep things interesting.

The Lost Saint is a fantastic sequel which builds up to a huge cliff-hanger ready for the last in the trilogy. This book was quite a bit darker than the first but I really loved that about it. If you haven't started this series yet, you should, ready in time for what should be a very exciting ending.
Read more
Report abuse

Lauren l.
5.0 out of 5 stars AMAZING!!!!
Reviewed in the United Kingdom on 21 January 2021
Verified Purchase
after getting the dark divine a long time ago now and reading that multiple times I decided to get the next in the series and boy I was not disappointed, I haven't finished yet but so far it is just amazing the story develops nicely so I cant wait to finish this and get the last in the series!!!
Read more
Report abuse

Andrew Mc
5.0 out of 5 stars Five Stars
Reviewed in the United Kingdom on 13 June 2015
Verified Purchase
handsome
Read more
Report abuse
See all reviews
Get FREE delivery with Amazon Prime
Prime members enjoy FREE Delivery and exclusive access to movies, TV shows, music, Kindle e-books, Twitch Prime, and more.
> Get Started
Back to top
Get to Know Us
Make Money with Us
Let Us Help You
And don't forget:
© 1996-2020, Amazon.com, Inc. or its affiliates