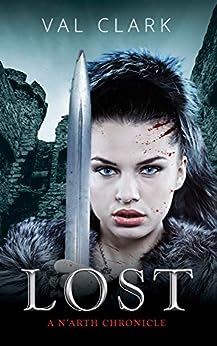 by Val Clark (Author) Format: Kindle Edition
See all formats and editions
Sorry, there was a problem loading this page. Try again.
Hi, I’m Shannon Mackay, Shazz to my friends.
I love singing, sword fighting and fantasy anything: books, games, cosplay, movies, TV series... When I’m not singing, fighting, reading, watching or engaged in something fantasy I’m imagining it. I even dream fantasy.
That’s why, one night when this huge ball of lightning rolls over me and, next minute, I’m someplace (N’arth) and sometime else (2000 years in my future), I’m convinced I’m dreaming. One of my classic duel dreams where I fight the baddy and I win!
When I can’t sing, lose the duel, and don’t wake up after a really hard fall, I start to believe this old guy, Nuselmir.
He’s the one who brought me to N’arth. He says he’s a scientist from an advanced planet, destroyed by his brother Fircule, and now Fircule’s trying to destroy N’arth. He’s convinced that only one person can save this world, Princess Raylene. Big problem, some childhood trauma caused her to become mute and withdrawn. In desperation, Nuselmir put her genetic markers in a device called a Dron and used it to locate someone who looks like her and could impersonate her‒me and then swaps us. Oh, yeah, my Mum and Dad will love that.
So, he drags me to this other place, where toilet paper hasn’t been invented yet and expects me to be her. No way! Not my monkey! That is until I learn of Fircule’s Big Plan to Destroy the Universe. N’arth is just the beginning, Earth is next on his list. The sooner I do what I have to do, the sooner I can get back to Earth and warn it of Fircule’s plan.
The fantasy becomes reality but it’s not that easy. Nuselmir hasn’t got a plan. Just impersonate Raylene. Great. And there’s so much he doesn’t tell me, like why nobody likes Raylene. Not only have I been transported to a new place I’ve got no friends and I can’t sing. It’s tough, really tough. Except for the training with the sword, that I do pretty well at. BTW, Sword Master is not impressed when I searched the armoury and choose the king’s boyhood sword.
Things go from tough to unbearable when my ‘father’ King Alexander visits Nuselmir’s island keep and tries to get me killed—twice. Oh, and thanks Nuselmir but, if I die on N’arth that’s it. I’m dead. The king leaves the keep believing I’m dead and this is the thing that changes everybody’s mind about me. So, I don’t actually have friends, but I do have respect and loyalty from the servants and soldiers and this inspires me to look out for them.
If the king finds out I’m still alive...
I search maps and plans and eventually find a place for us all to escape to, a cave accessed through a secret passage that starts in my room. We barely get away before the king’s assassins strike.
Five of us. Me, of course. Yannah, my maid and Raylene’s childhood friend. Dieter, a bastard kitchen hand. Brghyn a humanoid alien. And an unconscious Nuselmir.
We can’t do anything to rouse Nuselmir and decide to find the Red One, a reclusive healer who might live near the Ridge, where Brghyn’s race live. It’s my idea to disguise ourselves and hopefully avoid detection on the road by the king’s soldiers.
The journey is fraught with danger and deprivation, but we eventually make it to the city of Pleth, where I meet a really old guy called Sim. In a soundproof room, he teaches me the Last Song, embeds a clear crystal in my sword, and dies.
Fircule must have heard the singing—which isn’t surprising because he’s the one who used a Dron to stop singing in the first place. He sends his mate Herlon to grab me, only I’m with Yannah this time, and takes us to Herlon’s Nodal Mines. We are three months in the mines where the task of killing the life source of N’arth nearly kills me.
Why do I obey Herlon?
How do we escape?
Do Brghyn, Dieter and Nuselmir find the Red One.
What happened to the real Raylene?
Why me?
Who saves N’arth?
Read The Lost to join me on my adventure and find the answers to these questions.
Read more
Previous page
Next page

In Lost, Clark has created a cast of wonderful and rich characters that the reader can't help but ride with on an enticing tale of adventure and growing intrigue. And if that wasn't enough, seeing a fantasy medieval society through the eyes of a 21st century teenage girl from Australia is worth the price of admission alone.

Val Clark is an award-winning story teller and visual artist. She's addicted to reading, particularly YA, and writes across genres and ages. She loves teaching creative writing, chatting with fellow writers, and helping them achieve their dreams. She holds teaching qualifications in Fine Arts, a Masters in Creative writing, and is a self-confessed writing workshop junkie. She lives in rural NSW and, next to writing, she loves to travel. --This text refers to the paperback edition.

Halle
4.0 out of 5 stars Great read
Reviewed in Australia on 18 February 2019
Verified Purchase
I usually don't read time slip fantasy stories but I really enjoyed this one. The description of the world, story and characters are well written. I really enjoy books which build believable, complex characters and this book delivered. The plot develops at a good pace with enough adventure to keep you reading. There is an interesting twist at the end and I look forward to the next book in this series.

Lisa Griffiths
5.0 out of 5 stars Get Lost!
Reviewed in Australia on 30 August 2019
Verified Purchase
It's a well written story with grit. Clark made me care about charaters, even the ones I didn't like. Buy it, it's worth it.
Read more
Helpful
Report abuse

Tess
4.0 out of 5 stars An adventure like no other!
Reviewed in Australia on 15 August 2018
An unexpected journey like no other, this book is delightfully unpredictable with an inspired imagination. As the characters build and puzzle pieces come together, you’ll be page turning and rooting for this sassy hero. I’m looking forward to the next book in the chronicle and more from this author.
Read more
Helpful
Report abuse
See all reviews

Adam Clark
4.0 out of 5 stars A decent read
Reviewed in the United States on 14 August 2018
Verified Purchase
A unique and entertaining story. There were a moment or two where it felt a bit disjointed, as though the story was missing a bit. Possibly something that never made it from the authors mind to paper. Also some of the protagonists asides would break the fourth wall and eject me from my immersion in the story. If however these are my only complaints, I must rate this a first class book in comparison to some of the poor excuses for literature I have read that have garnered 4+ star ratings from reviewers who obviously have no grasp of the English language. All that to say; if you like some of the highly rated trash out there then this book should blow your mind.
Read more
Report abuse

DrRita
5.0 out of 5 stars Fantasy and Adventure
Reviewed in the United States on 12 August 2019
Verified Purchase
I love reading fantasy stories by authors with good imaginations, and Val Clark is one of those amazing authors. I enjoyed her novel Lost: A N’arth Chronicle. The action starts on page one, and the fantasy and adventure continues until the very last page. The characters become real, as I neared the end of the story I didn't want it to end. So I was thrilled to learn the fantasy will continue in book 2 of The N’arth Chronicle series. And I loved the sword!
Read more
Report abuse

Suzanne
5.0 out of 5 stars A gripping story
Reviewed in the United States on 19 August 2018
Verified Purchase
I got totally immersed in the story, to the extent that time in the real world just seemed to stand still. I read a good portion of this book while waiting for an appointment with someone who was over two hours late. The delay didn’t bother me one bit nor did I even realise the time because I was enjoying the story so much. I later went home and finished the book, not doing anything else - including cooking dinner and going to bed at a reasonable hour - because I enjoyed the story so much. That’s a sign of a good book. I am very much looking forward to the next book in the series.
Read more
One person found this helpful
Report abuse
See all reviews
Report an issue
Does this item contain inappropriate content?
Report
Do you believe that this item violates a copyright?
Report
Does this item contain quality or formatting issues?
Report