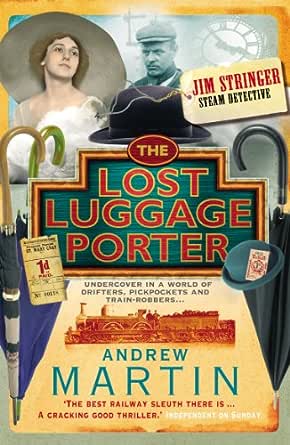 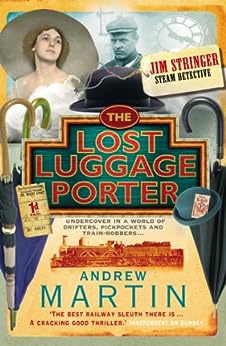 "The best sleuth that 200 years of the railways have ever produced." --The Independent (London)

ADVANCE PRAISE FOR THE NECROPOLIS RAILWAY

ANDREW MARTIN was a Spectator (London) Young Writer of the Year and has written for the Guardian, the Daily Telegraph, and Granta . He has a weekly column in the New Statesman . He lives in London. --This text refers to the paperback edition.

"The best sleuth 200 years of the railways has ever produced " The Independent
" --This text refers to the paperback edition.

"Page-turning, confidently written." The Guardian (London)
"The atmosphere of neglected streets . . . dingy saloon bars, supper of boiled bacon and pickles, and dismal, unceasing rain are splendidly evoked." The Telegraph (London)
From the author of The Necropolis Railway and The Blackpool Highflyer comes another ingenious railway thriller featuring Jim Stringer. It is the winter of 1906, and Jim Stringer has been promoted from amateur sleuth to official railway detective for York station. When the station s mysterious lost luggage porter tips him off to a group of railway thieves, Jim is instructed to infiltrate the thieves gang and unwittingly enters the orbit of a dangerous, deranged villain. His plight is made even worse when threats are made against his pregnant wife. Can Jim get to get to her before the criminals do?
Praise for Andrew Martin

"Andrew Martin succeeds brilliantly at re-creating a railwayman's lot." --The Seattle Times
"Martin does a stunning job of bring to life the era when steam locomotives chugged from London through the British countryside." Booklist

ANDREW MARTIN was a Spectator (London) Young Writer of the Year. He lives in London. His novels featuring Jim Stringer include The Necropolis Railway and The Blackpool Highflyer." --This text refers to the paperback edition.
Read more

Dick Pearson
3.0 out of 5 stars A Good yarn and an Interesting Howler
Reviewed in the United Kingdom on 18 October 2012
Verified Purchase
Having read the Baghdad Railway Club and enjoyed it I started to read the series in chronological order: I am enjoying them and will make my way through them all in time. The Lost Luggage Porter like its companions is not a thriller but is also not a who-dun-nit. Rather it is a tale that unfolds and lets the reader enjoy a slice of life evolving and a crime being solved - a good yarn which develops slowly and leads to a tense conclusion with all to human and weak characters.

Other reviewers have bemoaned the emphasis on social description and railway minutiae but in reality they are what makes the stories hang together. My main reason for writing this review, however, is to highlight the fact that along with all these detailed descriptions of life and society at the turn of the 19th/20th centuries he has made one howler. He describes the use of one pound notes in the proceeds of the main robbery. Between the banking Act of 1833 and the introduction of Treasury notes in 1914 at the start of the First World War there were no One Pound notes! The smallest legal tender paper money in that period were Five Pound notes.

david holmes
4.0 out of 5 stars Twists and turns
Reviewed in the United Kingdom on 4 October 2017
Verified Purchase
Sometimes I thought that the plot a little to ambitious , and that the principle character was too far out on a limb
Read more
Report abuse

D
4.0 out of 5 stars A bit far fetched but Stringer fans will like this
Reviewed in the United Kingdom on 13 April 2013
Verified Purchase
Despite being a woman with no interest in railways to speak of I have really got into Jim Stringer and his world. I thought this was a bit far fetched in places, but the sinister atmosphere was nicely built up around what was really quite a slight story. Not one of the very best Andrew Martin stories, but I liked this a lot.
Read more
One person found this helpful
Report abuse

Mrs Oz
5.0 out of 5 stars Great
Reviewed in the United Kingdom on 4 October 2017
Verified Purchase
My husband loves all in the series
Read more
Report abuse
See all reviews
Get FREE delivery with Amazon Prime
Prime members enjoy FREE Delivery and exclusive access to movies, TV shows, music, Kindle e-books, Twitch Prime, and more.
> Get Started
Back to top
Get to Know Us
Make Money with Us
Let Us Help You
And don't forget:
© 1996-2020, Amazon.com, Inc. or its affiliates