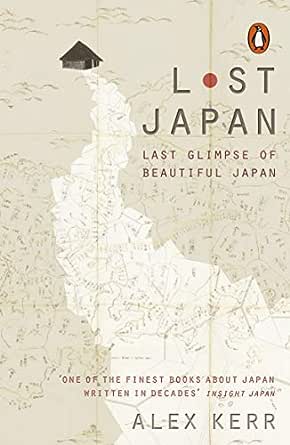 An enchanting and fascinating insight into Japanese landscape, culture, history and future.

Originally written in Japanese, this passionate, vividly personal book draws on the author's experiences in Japan over thirty years. Alex Kerr brings to life the ritualized world of Kabuki, retraces his initiation into Tokyo's boardrooms during the heady Bubble Years, and tells the story of the hidden valley that became his home.

But the book is not just a love letter. Haunted throughout by nostalgia for the Japan of old, Kerr's book is part paean to that great country and culture, part epitaph in the face of contemporary Japan's environmental and cultural destruction.

Alex Kerr is an American writer, antiques collector and Japanologist. Lost Japan is his most famous work. He was the first foreigner to be awarded the Shincho Gakugei Literature Prize for the best work of non-fiction published in Japan.

Robyn Murray
5.0 out of 5 stars five star Alex Kerr on the disappearing beauty of Japan.
Reviewed in Australia on 17 November 2018
Format: Kindle EditionVerified Purchase
Easy to read narrative on the beauty and contemporary cultural crisis Japan is facing by one who knows the country deeply.
Read more
Helpful
Comment Report abuse
See all reviews from Australia

Peter Hargreaves
5.0 out of 5 stars Recommended. Reading it may have made it less likely I shall return to Japan.
Reviewed in the United Kingdom on 2 October 2018
Verified Purchase
I read this book having cycled in Japan. Entranced by its beauty and the courtesy of its people, I wished to return.

The book is lyrically written by a Japanese speaking, Oxford educated, American. Throughout it is tinged with regret, for the damage done to the landscape, wild rivers dammed and channelled in concrete, road tunnels cutting through the hillsides, diverse forest replaced by uniform ranks of cedar, unburied electric wires scarring the cities.

There is sadness for the abandonment of thatch, which as a result became prohibitively expensive, and for the ubiquity of garish lighting replacing interior shadows.

Traditional Japanese houses had an adjoining kura, or storehouse. These contained furniture, screens and trays, set out in the house when needed with the seasons, the house otherwise left in an essentially stark emptiness. Subsequently, kura were periodically emptied and the contents sold through Kyoto auction houses. As the kura were emptied, the supply of art and antiques dwindled.

Kerr contrasts Europe, where the traditional continues to be occupied and adapted, with Japan, where it has been abandoned. He summarises Japan’s future as one of theme parks.

Westerners internalise their guilt. The Japanese only regret their actions if shame is externally imposed. There is a uniformity in education and behaviour stifling creativity. Debates in the Japanese Diet are dominated by tatemae, the official position, having precedence over hone, real intent. Culture has flowed one way from China to Japan, with very little passing back. Numerous Japanese practice traditional arts, the tea ceremony, calligraphy, flower arranging, but in formalised ways lacking creativity or, in Kerr’s view, appreciation of real beauty.

Traditional Kabuki theatre involves elaborate costume. The plots are of lords and their retainers, lovers, but never friends. All roles are played by men.

The performances involve elaboration between dancer and drummer, working together with delays in the dance and beat of the drum. Kerr describes an actor playing a princess, who wished to work with a drummer improvising the dance in the traditional way. However the drummer had been trained only to perform according to a fixed pattern and was unable to improvise.

Reading “Lost Japan”, I better appreciated those things, which are beguiling about Japan. I recommend the book both for its language and insights. Sadly, having read it, it is less likely I shall return to Japan.

erg22
1.0 out of 5 stars Self-indulgent life story
Reviewed in the United Kingdom on 10 March 2019
Verified Purchase
Not usually one to give a one star review but I feel like I have wasted my money on this book. I could barely get past the third chapter, the author comes across as incredibly self-indulgent. He acts like he is the only white guy to have lived in Japan, even literally writing that he is probably the first foreigner to visit the village of Iya. Much of what he says is in a similar vein, he talks about how it is so hard to make new friends in Japan that even the native Japanese rarely do so, then brags about how he made friends with many famous Kabuki actors. He calls Japan an ugly country and states that any friends who have visited him there have been “disappointed.” Which I find hard to believe. The writing style is cringeworthy and I had to stop reading, but I imagine the rest of the book is more of the same. I’m especially disappointed considering the great reviews and the awards this book has received.
Read more
16 people found this helpful
Helpful
Sending feedback...
Thank you for your feedback.
Sorry, we failed to record your vote. Please try again
Report abuse

Nadaka71
1.0 out of 5 stars A waste of time
Reviewed in the United Kingdom on 5 June 2019
Verified Purchase
When I started the book I was rather charmed by the flowing writing of the introduction. The style was good and really caught me. However, the book has been originally written in Japanese and translated into English by someone else.
Once the part written by Alex Kerr is read, the change is abrupt, the text stops to flow, the vocabulary dramatically impoverish, like bricks of wall sentences are juxtaposed without any tie. Reading the book became a daunting task, I had the feeling I was crawling through the trenches of clumsy sentences. It was a tedious, laborious and unappealing reading. The content had little appeal, however I was curious about the personality of the author. I tried to grasp his intrinsic personality. Is he a country bumpkin gallivanting around, or a ninny lost in Japan?
The book is a repeated and never ending comparison opposing the US to Japan resulting in a philippic of a country loosing the marks of its feudal/traditional culture and picking up the pace to become a modern country. I did my best to read as much as I could, reaching the point I had to confess myself that I was wasting my time.
Read more
7 people found this helpful
Helpful
Sending feedback...
Thank you for your feedback.
Sorry, we failed to record your vote. Please try again
Report abuse

federica
5.0 out of 5 stars Well written, makes you want to learn and understand more about Japan
Reviewed in the United Kingdom on 6 March 2019
Verified Purchase
Great way of approaching the Japanese culture, history and ways of thinking through the eyes of someone that has really immersed themselves in that world. Quite a nostalgic read, it has changed the preassumptions I had about Japan. Perfect read leading up to my first visit to Japan.
Read more
2 people found this helpful
Helpful
Sending feedback...
Thank you for your feedback.
Sorry, we failed to record your vote. Please try again
Report abuse
Load more international reviews

KW
3.0 out of 5 stars Art collectors memoir
Reviewed in the United Kingdom on 31 May 2019
Verified Purchase
A bit disappointed by this book. I was hoping for a Japanese history lesson and this was more of a memoir of an art collector. Learned some useful information though so overall okay.
Read more
Helpful
Sending feedback...
Thank you for your feedback.
Sorry, we failed to record your vote. Please try again
Report abuse

suzume
2.0 out of 5 stars Boring
Reviewed in the United Kingdom on 7 December 2019
Verified Purchase
The book is pretty boring. The seller is good.
Read more
Helpful
Sending feedback...
Thank you for your feedback.
Sorry, we failed to record your vote. Please try again
Report abuse

HB7
5.0 out of 5 stars A journey into the past
Reviewed in the United Kingdom on 4 March 2020
Verified Purchase
An engaging book which made me realise what I had missed on my recent trip to Japan!
Read more
Helpful
Sending feedback...
Thank you for your feedback.
Sorry, we failed to record your vote. Please try again
Report abuse

John Halstead
4.0 out of 5 stars Four Stars
Reviewed in the United Kingdom on 21 October 2017
Format: Kindle EditionVerified Purchase
Fascinating insight from someone who has spent the greater part of his life in thec
Read more
Helpful
Sending feedback...
Thank you for your feedback.
Sorry, we failed to record your vote. Please try again
Report abuse

Richard
4.0 out of 5 stars Four Stars
Reviewed in the United Kingdom on 13 January 2018
Verified Purchase
No Comment
Read more
Helpful
Sending feedback...
Thank you for your feedback.
Sorry, we failed to record your vote. Please try again
Report abuse