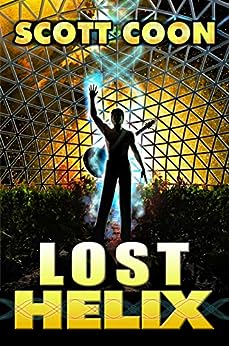 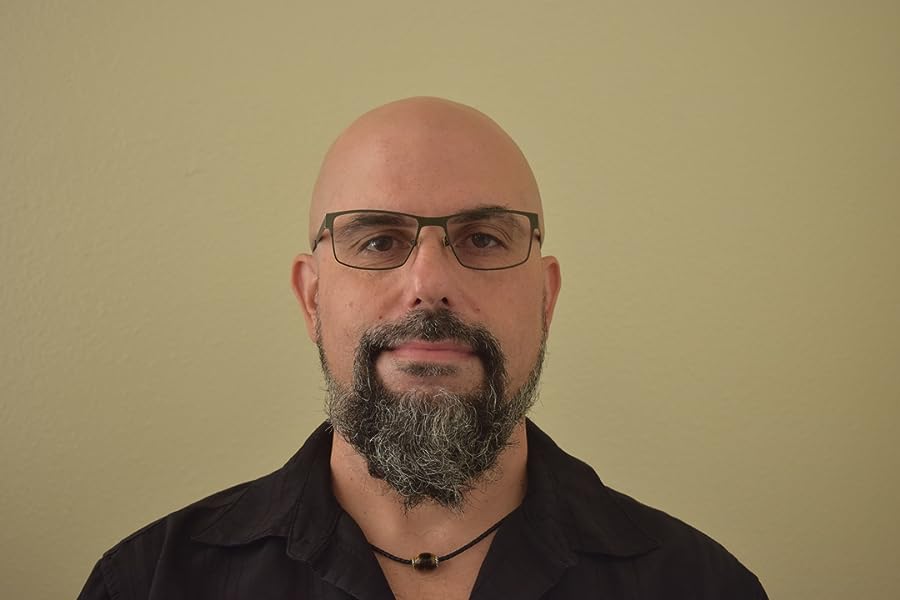 Scott served for six years, rising to the rank of Sergeant. His service including a tour in Kuwait where he received a First Army Combat Patch and the Joint Service Achievement Award. Now a software developer for a major bank, Scott brings his computer and military experience into his work, along with a sense of spectacle.

Scott Coon shares his knowledge of writing with others and helps other creatives do the same. He hosts the Writers of Sherman Oaks Critique Group meetings and National Novel Writing Month write-in events. His YouTube channel and websites provide insights into his work and give advice to writers. His Little Creative Interview series helps to foster learning in the creative community. See his websites for more information.

Star
4.0 out of 5 stars Fun, YA, thrilling, sci-fi novel
Reviewed in the United States on 1 March 2021
Verified Purchase
Fun. Thriller. Sci-fi. YA. Family-friendly.
These are the things or feelings I am left with after reading Lost Helix.

Lost Helix is a YA sci-fi novel that follows DJ, a guitar-toting, shy teen who lives in what essentially is a corporate-owned (dystopian) mining town, with rampant joblessness, orphans raised for the sole purpose of mining, and deaths as common as flies. Born by what he believes is artificial insemination (and thus he is without a mother) and unaware of his father’s sordid career, DJ is caught by complete surprise when one day he finds his father missing. He is even more confounded when the private security starts to tear up his apartment looking for something, and worse, when they start to come for him.

Thankfully his best friend, Paul, has been planning for this—leaving. And thus, the two boys flee the station, launching them on a journey filled with danger, rock’n’roll, action-packed chase scenes, space pirates (one of which wants to learn guitar), Paul getting shot, and planet hopping.

Overall, this was a fun read. I enjoyed the friendship between DJ and Paul. The two of them had that opposites-attract kind of friendship where DJ is the shy hacker and Paul is the Zeroball champion. They both respected each other, though, and there wasn’t too much angsty stuff going on (like as in DJ never tried to steal Paul’s girlfriend or anything). The plot at all times was clipping along at great speed and easily held my attention. The ideas such as the grow shoes, or the crazy hermits under the farms were unique and interesting. I liked how the hacking was used in this story as something almost kind of magical and how DJ embraced both his public guitar playing and his hacking skills (and, I suppose, his fists).

I wasn’t as captivated by the characterization. I felt like Paul was a bit of a human plot device at times as he was always rescuing DJ and doing everything for him. Maya, I felt, had not much of a personality other than as a spunky love interest girl. Besides those complaints, I had trouble picturing some of the imagery at times. (That might just be me, though.) I also thought that some of the revelations for DJ might have hit harder if we hadn’t already seen everything from Derek’s POV. There was additionally something a bit (not sure what the right word is) strange, maybe, about how the beginning was rather dark in tone with bullying and murder, but the ending and middle bit was so light in comparison that it almost felt a bit cheesy at times.

This is not to say that I didn’t enjoy it, I certainly did (as I read it quite quickly), but I think I might not be in the ideal target audience range for this novel anymore. I would recommend this book for those who are looking for a fun, family-friendly, thrilling sci-fi novel with unique ideas (none of the aforementioned murdering happened “on-screen,” and I don’t think there were any swear words). I wouldn’t recommend this for people who are looking for more adult sci-fi.

Sherry Ellis
5.0 out of 5 stars An Engaging Coming of Age Space Odyssey
Reviewed in the United States on 4 October 2020
Verified Purchase
DJ is the son of a programmer/computer hacker living on a spaceship and working for a corrupt mining corporation that has taken on the role of the government. Mystery has always surrounded DJ's dad and his personal life. DJ is trying to get to the truth. What exactly does his dad do? Who is his mother? And why are the corporate executives trying to get his guitar?

Lost Helix is a coming of age story set in a futuristic society. The cat and mouse games DJ and his friends have to play to avoid the bad guys and get answers, make it a fast-paced read. The characters are realistic with strengths and flaws. It's also nice to see a strong young female in the character of Maya.

Damir
5.0 out of 5 stars YA space opera with an optimistic bent
Reviewed in the United States on 15 January 2021
Verified Purchase
I prefer my science fiction with a gritty, dystopian bent, and generally steer clear of both YA and space opera. This may be why I found Lost Helix such a refreshing change of pace. The novel's optimistic, feel-good tone does not detract from the tight plotting and great characterization in the slightest.

What can inspire a peril-filled, heroic journey in a world where corporations own their employees and provide for all their needs, gravity can be turned on and off more or less at will, and travel from mining colony to planet and back again is as easy as hopping onto a plane (used to be)? Plenty, if you ask Scott Coon. The author pays homage to the standard tropes of both space opera and YA fiction. At the same time, he meticulously details the setting, paying attention not only the the characters' immediate surroundings, but the technology, the politics, the interconnected economics and ecosystems, even the evolving social relations of human expansion into space. In Lost Helix, oppression is no mere plot device to drive the story forward, and the strained dynamics between the corporate colonies and settled freeholds are built on solid logic.

The main challenge for every space opera writer is to craft a world radically different from any reality known to the reader, yet still believable and engaging, with humans doing things in recognizably human ways, having human aspirations and doubts, making human mistakes. In my opinion, it is a test that Scott Coon passes with flying colors.
Read more
Report abuse

Lina
5.0 out of 5 stars Interesting space odyssey
Reviewed in the United States on 3 September 2020
Verified Purchase
The book has a witty plot. DJ's search for his lost father really becomes an interesting adventure. The characters had fascinating and admirable personality traits. It was a great read, fast paced and easy to read.
I highly recommend it for adults and young adults.
Read more
Report abuse

Jamie
5.0 out of 5 stars Full of adventure!
Reviewed in the United States on 11 July 2021
Verified Purchase
Reading this reminded of the excitement I had when I watched Back to the Future. Maybe it was something about the guitar, or that they're both set in the future or they just have gawky teens as leads. In any case, the writing is fun and superb, the author has really taken the time to craft a world disparate from ours but badgered with the same social issues. There's quite a decent amount of jargon here and there that helps make the world believable. It's a charming YA novel and earns a spot on my recommendation list.
Read more
Report abuse
See all reviews
Back to top
Get to Know Us
Make Money with Us
Let Us Help You
And don't forget:
© 1996-2021, Amazon.com, Inc. or its affiliates