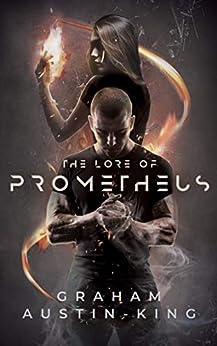 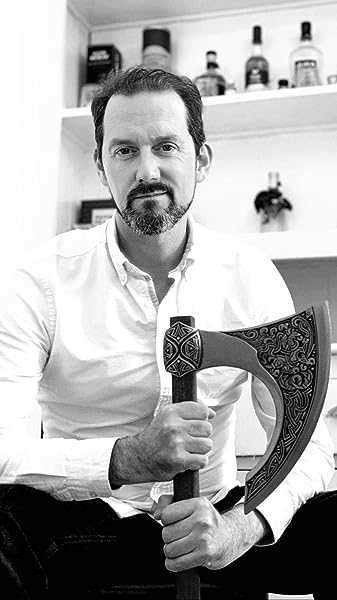 The Lore of Prometheus: A Modern Fantasy Thriller Kindle Edition

"Captivating and action-packed, an urban-fantasy that's hard to put down!" - Steve McHugh, bestselling author of The Hellequin Chronicles.

"The Lore of Prometheus is a shockingly wicked dark tale of the power of the human mind - the most dangerous monster of them all." - Timy, Grimdark Magazine.

"An action packed read. Prepare yourself for a non-stop ride if you can handle it." - Grimmedian.

Graham Austin-King is the author of the Riven Wyrde Saga. --This text refers to the audioCD edition.

4.3 out of 5 stars
4.3 out of 5
27 global ratings
How are ratings calculated?
To calculate the overall star rating and percentage breakdown by star, we don’t use a simple average. Instead, our system considers things like how recent a review is and if the reviewer bought the item on Amazon. It also analyses reviews to verify trustworthiness.

Proud Book Reviews
TOP 1000 REVIEWER
4.0 out of 5 stars Definitely deserves to have won the BBNYA 2020! Amazing writing and captivating story!
Reviewed in Australia on 19 April 2021
Trigger Warnings
This book contains:
• PTSD from serving in Afghanistan
• Descriptions of the destruction of war, including injury to women and children
• Experimentation on humans
• Torture of humans
Characters
The book is broken up into three parts of which the first and last parts are from John’s point of view, with sporadic inclusions of Mackenzie’s point of view. The middle part however is from Mackenzie’s point of view with some sporadic inclusions of John’s point of view.
John has previously served in the UK army in Afghanistan and as a result has severe PTSD. It’s something that’s ruined his life, ended his relationship and as a result driven him back there.
Mackenzie, however, is an Australian nurse volunteering in Afghanistan when she’s kidnapped by her driver on the way home from work.
Storyline
The general gist of this story is an Afghan warlord is kidnapping people who have magical powers with the intent of learning how to wield them himself. Anything more than that would kinda ruin it for you! And it’s too good to ruin!
Overall Thoughts
I absolutely loved this story and I’m so glad it won the Book Bloggers Novel of the Year Award 2020!
Given most of the other books that made it to the finals we aimed at a younger audience and/or were of a lighter theme, I wasn’t sure how this darker story would hold up. I loved the mix of emotional development, different points of view, psychological changes, an amazing villain and the determination and fortitude of John and Mackenzie.
Every time I thought I’d hit the limit of Graham’s mastery, I discovered I was wrong!
Who would have thought such a mix of fantasy, technology and a Middle Eastern war could result in such genius?!
Read more
Helpful
Report abuse
See all reviews

Lynn Worton
5.0 out of 5 stars An Exciting Read!
Reviewed in the United Kingdom on 12 December 2018
Verified Purchase
This story is a fantastic mix of action, danger and magic. I loved it!

John Carver is an ex-soldier and war veteran. I liked this man a lot. He's someone you want watching your back, but he's seen and done things most civilians don't experience. He's faced danger and sacrificed much to protect others. When his squad was killed in Kabul five years before, his life changed forever. Some call it PTSD, others call it crazy, but John's also known to some as The Miracle of Kabul. To find out why you'll need to read the book. In dire need of funds, he finds himself headed back to Afghanistan as a security consultant. But things are not so simple, and as danger threatens, he will have to embrace his inner power once more.

Mackenzie Cartwright is a nurse working in Kabul, kidnapped while heading home after a shift at the local hospital. I liked her a lot too. She has an inner strength that shines through, even when dealing with her capture and subsequent torture.

This story is not for the faint-hearted and told through John's and Mackenzie's point of view. I was riveted to the story from the first page and didn't put it down until I finished it. Having read Faithless in 2017, I was expecting a dark, atmospheric tale, and that's what I got, though it was a little less claustrophobic since its set in a desert rather than an underground mine. I could tell a lot of research had gone into the writing of this book, from the military-speak to the weapons used, and everything in between. None of the violence is gratuitous in any way; it only enhances the realistic feel to the story.

Both John and Mackenzie go through hell, so there's little wonder their psyche becomes fractured. I think it was Lewis Caroll, who's character, The Cheshire Cat, said (and I'm paraphrasing here), "We're all a little insane here." What is reality? What is normal? The author explores this concept and adds a twist to it. We know only a fraction of what the brain is capable of, so who's to say that there's no potential for our minds to evolve to use capabilities such as ESP, telekinesis and other paranormal activity. It would be interesting to find out. But it could be several decades, if not a few hundred years before the human mind is understood enough to know if these powers are latent within everyone. Or if it's our perception of the world around us that creates our reality. I find it intriguing.

There is a lot of action, particularly towards the middle and end of the book, that had me sitting on the edge of my seat. By the time I reached the end of the book, I felt breathless and was left wanting more. I don't know if the author intends to turn this into a series, but I would be interested to see what John and Mackenzie are capable of together in the future.

Graham Austin-King has written an exciting, dark military fiction novel that kept me turning the pages. This book is superb! I think that this book is a lot stronger than The Riven Wyrde Saga and shows this author's growth in confidence as a writer. I love his fast-paced writing style, and the story flowed wonderfully from beginning to end. The characters came alive on the page and felt remarkably lifelike.

Although there is mention of sex, it’s not explicitly shown. Nevertheless, I do not recommend this book to young children or those of a nervous disposition, as there are scenes of violence and gore (battle scenes amongst others) that could be very disturbing to some readers. However, I highly recommend this book to older teens and adults alike if you love dark thrillers, military fiction, and/or paranormal fantasy stories that have an X-Men feel to them. - Lynn Worton
Read more
One person found this helpful
Report abuse

S. D. Howarth
4.0 out of 5 stars Bourne meets Xmen and Rocks
Reviewed in the United Kingdom on 20 December 2018
Verified Purchase
Damn good book, which a few cracking one liners which resulted in a number of glares from the missus. Two fine characters and Carver's multiplicity was what I wished to read more about, as it was entertaining and I was curious to see how they'd manifest with his abilities, such as the Tribe of One series in Dark Sun.

Hot deserts were the only similarities as the ending rocked, with a highly enjoyable ending. I'd have liked to seen more of Carver in the middle as he goes awol for a while, being my petty gripe. The analogy of Bourne meets X-men is appropriate, with more dark humour and bangs than pretentiousness.

Cool stuff and worth the purchase.
Read more
One person found this helpful
Report abuse

Michael Sterry
5.0 out of 5 stars Who Dares Wins meets X-Men meets Heroes.
Reviewed in the United Kingdom on 24 February 2019
Verified Purchase
You really should read this! It's well imagined, well written and well researched. This book investigates the power of the human mind and what can be achieved if you believe in yourself. A military fantasy that I was dubious about at first but my doubts were unfounded. Very different from the other work by this author and perhaps his best work so far. (Though my favourite is still Faithless).

It is quite upsetting in places. It uses torture so if you are of a sensitive nature, be warned.

Highly recommended for those of you who like military characters and who like some fantasy thrown in too.
Read more
Report abuse

Tony Silver
5.0 out of 5 stars A great read
Reviewed in the United Kingdom on 17 December 2018
Verified Purchase
This book was recommended by another author, Steve McHugh. That was enough for me to buy it and start reading, not even knowing what the story was about.

Sassy
5.0 out of 5 stars Absolutely blooming great read
Reviewed in the United Kingdom on 24 May 2021
Verified Purchase
The book is well written. The plot to grab Carver, somehow steal or acquire his “magical” power, he doesn’t know he has. along with PSD. Then add to the mix an evil scientist come Middle Eastern nut job, that will stop at nothing. Add to the recipe an Australian Nurse, abducted by said evil scientist come nut job. It’s a recipe for chaos. A story of betrayal, guilt and revenge.
Read more
Report abuse
See all reviews
Back to top
Get to Know Us
Make Money with Us
Let Us Help You
And don't forget:
© 1996-2021, Amazon.com, Inc. or its affiliates