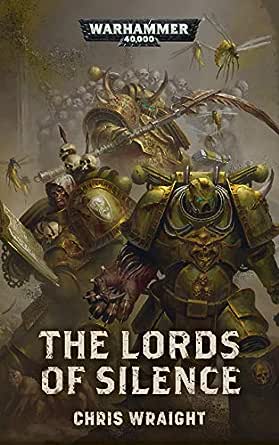 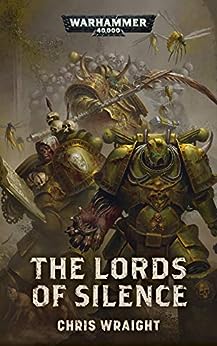 The Cadian Gate is broken, and the Imperium is riven in two. The might of the Traitor Legions, kept shackled for millennia behind walls of iron and sorcery, has been unleashed on a darkening galaxy. Among those seeking vengeance on the Corpse Emperor’s faltering realm are the Death Guard, once proud crusaders of the Legiones Astartes, now debased creatures of terror and contagion. Mighty warbands carve bloody paths through the void, answering their lord primarch’s call to war. And yet for all their dread might in arms, there is no escape from the vicious legacies of the past, ones that will pursue them from the ruined daemon-worlds of the Eye of Terror and out into the smouldering wastes of the Imperium Nihilus.

The Death Guard have returned to prominence with the return of Mortarion and their fabulous model range, and Chris Wraight's previous work with them (in his Space Wolves novels, notably) makes him the perfect person to delve into their particular darkness.

Chris Wraight is the author of the Horus Heresy novels Scars and The Path of Heaven, the Primarchs novels Leman Russ: The Great Wolf and Jaghatai Khan: Warhawk of Chogoris, the novellas Brotherhood of the Storm and Wolf King, and the audio drama The Sigillite. For Warhammer 40,000 he has written The Lords of Silence, Vaults of Terra: The Carrion Throne, Vaults of Terra: The Hollow Mountain, Watchers of the Throne: The Emperor's Legion, the Space Wolves novels Blood of Asaheim and Stormcaller, and many more. Additionally, he has many Warhammer novels to his name, including the Warhammer Chronicles novel Master of Dragons, which forms part of the War of Vengeance series. Chris lives and works in Bradford-on-Avon, in south-west England.
click to open popover

It's good stuff. Not excellent but better than a lot of novels about the Chaos Space Marines out there.
It's so hard to do engaging evil and very obvious when done badly.
GW is stuck in a difficult spot with a PG/15 rated consumer base at the lower end. So real evil is a no no. This book is allowed a certain bit of nastiness and avoids Disney esque descriptions of nurgley stuff.
Imho Nurgle is a tricky one to do well. If the immaterium is raw emotion made real, then how does rot come into it. Khorne and Slaanesh are obvious ones. Tzeentch and Nurgle seemed a bit of a fudge. The seven deadly sins from the bible seem a good place to mine and Khorne and Slaanesh flow well from that. Evil/Emotions/The Warp.
Sloth. Hmmmm. Not really a great buzzword for your deity. Sloth leads to rot leads to nurgle. I get that. But how would that base emotion create any ripple in the warp capable of generating a wet fart even?
Still, this is a good book, enjoyable. Not as dark as I was hoping.

Alexander Soden
3.0 out of 5 stars Ok but not great.
Reviewed in the United Kingdom on 25 November 2019
Verified Purchase
Being a death guard player I was really excited to read a book from the plague marines perspective. There are some great background details in the book which tell you more about the ins and outs of being a nurgle worshipping plague marine. I am finding it hard to complete the book because I just don't like the way it's written. I will finish it, but it doesn't really draw you in as much as other 40k novels.
Read more
Helpful
Sending feedback...
Thank you for your feedback.
Sorry, we failed to record your vote. Please try again
Report abuse

Giskard
4.0 out of 5 stars A good read for Death Guard fans
Reviewed in the United Kingdom on 2 September 2019
Verified Purchase
If you are interested in the Death Guard, this is a good read.
If not, knock off 2 stars from my score.
Read more
Helpful
Sending feedback...
Thank you for your feedback.
Sorry, we failed to record your vote. Please try again
Report abuse

Edward Cassells
5.0 out of 5 stars If you like Death Guard it’s a no brainer
Reviewed in the United Kingdom on 31 July 2019
Verified Purchase
Beautifully written book although he does say ‘Lumens’ too much, for that I’ll apologise as that’s all you are going to see now. Book was in perfect condition and for anyone who has been wanting a voice for the Death Guard this is it.
Read more
Helpful
Sending feedback...
Thank you for your feedback.
Sorry, we failed to record your vote. Please try again
Report abuse

Joel Cassin
5.0 out of 5 stars Insight into a chaos chapter
Reviewed in the United Kingdom on 3 April 2019
Verified Purchase
It was well written the character were well fleshed out and the plot was interesting.

Joel R.
5.0 out of 5 stars Another great Black Libary Book
Reviewed in the United Kingdom on 6 April 2019
Verified Purchase
Arrived a day early, great little read really enjoyed it and would recommend to other a must if your a fan of the Death Guard
Read more
Helpful
Sending feedback...
Thank you for your feedback.
Sorry, we failed to record your vote. Please try again
Report abuse

Meese
5.0 out of 5 stars Fantastic story
Reviewed in the United States on 9 October 2018
Verified Purchase
A great book following Mortarion's Death Guard as they spread Nurgle's blight across the galaxy. If you enjoy and follow Papa Nurgle, this story is for you 😊
Read more
10 people found this helpful
Helpful
Sending feedback...
Thank you for your feedback.
Sorry, we failed to record your vote. Please try again
Report abuse

Paul
5.0 out of 5 stars A great look into the minds of the Death Guard.
Reviewed in the United States on 22 March 2019
Verified Purchase
I really enjoyed this book. It really delves into the inner workings of a Death Guard Warband. More so it, it shows how they think and interact with each other as well as their enemies; both Imperial and within. It’s always interesting to get a point of view from someone other than units of the Imperium. There is good mix of action, intrigue and background. The characters are well developed as well. I liked that the Death Guard aren’t just another, “Smash, burn, kill” Chaos Marine unit. They smash, burn and kill, but they’re more calculating and reasonable. I put this book right up there with the Night Lords series that began with Soul Hunter, which are three of my all time favorites. I hope there will be follow on books.
Read more
4 people found this helpful
Helpful
Sending feedback...
Thank you for your feedback.
Sorry, we failed to record your vote. Please try again
Report abuse
Load more international reviews

Logan Calhoun
2.0 out of 5 stars Chris Wraight fails hard with this nearly impossible to get through trash heap of a novel
Reviewed in the United States on 25 December 2019
Verified Purchase
Chris Wraight wrote Luthor Huss and I loved that book. One of my favorite. I know writers have times where they don't write as well as they usually do. But I'm stunned with how bad this is. Every sentence a character says or action they take is followed by thoughts that are brought up because of this single action and they think about this for two paragraphs. This is the vast majority of the book. It doesn't pick up until 60 to 65 percent into the book. I don't know what happened to Chris Wraight. But if this is an indicator of what he puts out now. It may be time for a new line of work. Characters weren't interesting. I would forget their role in the Death Guard rather quickly. Even Mortarion or however it is spelled wasn't impressive. Primarch of the Death Guard and his part was boring as well. Over all I'd skip this. So much more out there to read. So much more. This is entirely skippable and should be skipped. I'm sorry Chris but you failed hard on this one.
Read more
One person found this helpful
Helpful
Sending feedback...
Thank you for your feedback.
Sorry, we failed to record your vote. Please try again
Report abuse

Schmoop McDoople
5.0 out of 5 stars Terrific novel from the deathguard perspective
Reviewed in the United States on 14 March 2020
Verified Purchase
If you're a fan of the Horus Heresy novels or 40k more at all, you will not be disappointed with this book. This book tells the story of a ship of plague marines separated from the legion. Their leader Vorx is dealing with the mystery of why they are separated, a conspiracy to overtake his authority, and the dangers of other chaos space marines. The author does a wonderful job of layering a story and still keeping it intriguing every chapter.
Read more
Helpful
Sending feedback...
Thank you for your feedback.
Sorry, we failed to record your vote. Please try again
Report abuse

Morgan J. Freed
2.0 out of 5 stars Boring
Reviewed in the United States on 27 August 2019
Verified Purchase
They tried..I give them that..The problem is it was just boring..They had the Plague marines to work with and could have really don't some great stuff..nope..Boring
Read more
2 people found this helpful
Helpful
Sending feedback...
Thank you for your feedback.
Sorry, we failed to record your vote. Please try again
Report abuse

Kindle Customer
5.0 out of 5 stars Great read
Reviewed in the United States on 24 January 2019
Verified Purchase
Captures the pestilence and decay that is Nurgle and his warriors, it left me wanting more, and for that I am grateful.
Read more
2 people found this helpful
Helpful
Sending feedback...
Thank you for your feedback.
Sorry, we failed to record your vote. Please try again
Report abuse

Chris
5.0 out of 5 stars Blessed by The Plague God
Reviewed in the United States on 3 February 2020
Verified Purchase
Chris proves once again he is the master of Chaos! After reading the Fabius Bile series I had to check this one out and it did not disappoint. Chris Wraight explores the Death Guard Masterfully. Thier culture, history and command structure are revealed in filthy disgusting detail and it is glorious. A must read for fans of Nurgle and will probably make fans out of anyone who reads it
Read more
Helpful
Sending feedback...
Thank you for your feedback.
Sorry, we failed to record your vote. Please try again
Report abuse