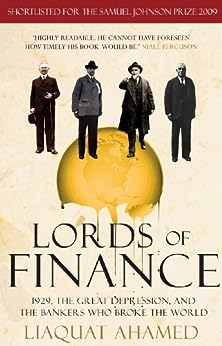 Lords of Finance: 1929, The Great Depression, and the Bankers who Broke the World Kindle Edition

Samuel Johnson shortlisted & FT/Goldman Sachs WINNER- a vivid, dramatic account of the four men whose personal and professional actions led to the world economic collapse of the late 1920s. --This text refers to an alternate kindle_edition edition.

“Ahamed cannot have foreseen how timely his book would be. Unlike most works on the origins of the Great Depression, Lords of Finance is highly readable – enlivened by vivid biographical detail but soundly based on the literature. That it should appear now, as history threatens to repeat itself, compounds its appeal.”
— Niall Ferguson, Financial Times

“Erudite, entertaining macroeconomic history of the lead-up to the Great Depression as seen through the careers of the West’s principal bankers…Spellbinding, insightful and, perhaps most important, timely.”
—Kirkus Reviews (starred) --Various

[Audio Review] Even those who aren't generally interested in economics will enjoy this historical look at wealth and power in the early twentieth century. Four magnates, each with the power of his country's federal reserve, controlled the world's finances. Their dealings in regulating the cost of currency among their respective countries became influential in causing the Great Depression. Stephen Hoye hones in on the author's brutal use of satire in attacking the four lords' ascendancy. Since the story deals with England, France, Germany, and the United States, Hoye's multilingual talents add depth to the characters and their milieus, adding an extra reason to enjoy his performance. Brimming with subtle humor and abundant detail, this audiobook is smartly enhanced by the narrator s skill and will be enjoyed by connoisseurs of both history and economics. J.A.H. © AudioFile 2009, Portland, Maine --AudioFile --This text refers to an out of print or unavailable edition of this title.

<DIV>Sebastian Edwards is associate professor of economics at the University of California, Los Angeles. Liaquat Ahamed is senior investment officer at the World Bank.</DIV> --This text refers to an out of print or unavailable edition of this title.

THIS HAS HAPPENED BEFORE.

The current financial crisis has only one parallel: the Wall Street Crash of 1929 and subsequent Great Depression of the 1930s, which crippled the future of an entire generation and set the stage for the horrors of the Second World War. Yet the economic meltdown could have been avoided, had it not been for the decisions taken by a small number of central bankers.

In Lords of Finance, we meet these men, the four bankers who truly broke the world. Their names were lost to history, their lives and actions forgotten, until now. Liaquat Ahamed's magisterial Lords of Finance tells their story in vivid and gripping detail, in a timely and arresting reminder that individuals - their ambitions, limitations and human nature - lie at the very heart of global catastrophe. --This text refers to an alternate kindle_edition edition.
Read more

4.6 out of 5 stars
4.6 out of 5
634 global ratings
How are ratings calculated?
To calculate the overall star rating and percentage breakdown by star, we don’t use a simple average. Instead, our system considers things like how recent a review is and if the reviewer bought the item on Amazon. It also analyses reviews to verify trustworthiness.

John Timothy Moore
5.0 out of 5 stars A comprehensive picture of what caused the Depression
Reviewed in Australia on 24 September 2019
Verified Purchase
As a non economist I found ‘Lords of Finance’ fairly easy to read and quite understandable. The people involved were ignorant and ego driven. Cared more about the game rather than the plight of the common people. Well researched and well written! Good job!
Read more
Helpful
Report abuse

Andrew
5.0 out of 5 stars An education!
Reviewed in Australia on 22 November 2019
Verified Purchase
The best kind of history. Entertaining. Insightful. Educational.
Feels like I’ve done a course in economics. It makes a powerful case against old gold standard economics. I’m sure there’s another side to the story, as it’s very pro Keynesian - I will have to try to find something from the other side of the fence.

Amazon Customer
5.0 out of 5 stars Brilliantly weaves history and economics.
Reviewed in Australia on 8 December 2017
Verified Purchase
This is a book you enjoy, yet also finish having learned a lot. The history, the economics - it traces a clear trail between the end of the first world war, the great depression and the start of the second world war.
Read more
Helpful
Report abuse
See all reviews

Jack
5.0 out of 5 stars Superb history, readable and informative
Reviewed in the United Kingdom on 14 September 2017
Verified Purchase
This did not turn out to be the book I thought I had ordered, but it proved a compelling read nonetheless. I thought I would get a book the explained the "springs and levers" that connected the Wall Street crash to bank failures to the depression. This was not made clear, and in hindsight it Is clear this book is aimed at a reader more knowledgeable in macroeconomic matters than I am.

Nevertheless, it is a fascinating book, extremely well written ( if not extremely well proofed) and very approachable even if you don't understand clearly some of the cause/effect relationships it talks about. Essentially it is a history of central banking and the growth of the effects of the Gold Standard during the inter war years, told through the roles played by the 4 chief protagonists, the Governors of the central banks of U.K., Germany, France and the New York Fed. Maynard Keynes features prominently and is shown as a key player in the increasing awareness of the limitations of the gold standard. The story focuses on the struggles of these four Governors in trying to deal with the fallout of the post-war reparations imposed on Germany, and the near-bankruptcy of both the UK and French governments during the depression. The US suffered enormously from the post-crash depression, but I never realised just how much it profited from the Allies from its war loans, to the extent that I can't help suspecting that the US took deliberTe action to accelerate the demise of the British Empire to impose its own hegemony. The French national stereotypes are played out again, both in its negotiations of the Reparations and its refusal to countenance meaningful reductions in the face of evidence that Germany would be unable to pay (consider that in today's terms relative to the size of the German Economy, reparations amounted to $2.4 trillion dollars !). The French position on Brexit negotiations (no discussion on Trade without settlement of the "divorce bill") came to mind several times as I read this book.
Anyone looking for a history of the growth of the role and expertise of Central Banks will find this a very useful read. Equally, it presents a very readable history of the main characters, especially the governor of the Central Banks and New York Fed, but also of the roles of FDR, Herbert Hoover and Winston Churchill, as well as John Maynard Keynes in this seminal period in Western economic history. A great read.

M A Mohamed
5.0 out of 5 stars interesting nook to read
Reviewed in the United Kingdom on 13 June 2015
Verified Purchase
I read this book November 2010. It was hilarious and very informative about the financial challenges Germany faced after the WWI, though this should never be allowed to be an accuse to start a war that had ended the lives over fifty two million people and the creation of the horrifying consideration camps.

As Greece is now facing shocking financial challenges and everyone is asking how at the beginning the EU allowed Greece to fund its social agendas with borrowed money; I thought about revisiting this book and rereading the part where the then German Kaiser and his parliament decided to fund the war with borrowed money, which contributed to the financial challenges and hyperinflation that Germany faced after the war. Hence, i bought this book again in kindle format! What happened to the paper copy that i bought few years ago? I kept sneezing when I try to read it!

The other issue is what will be the end game for Greece and the EUR club, who allowed Greece to borrow more than it could handle? Do we need to punish the ill-fated borrow or do we need to allow them go insolvent for short period of time?

How the remnants of African dictators now feel about the idea of silly borrowing and the doubting fact of repaying both the principle and the interest of what they had borrowed? Is Greece in the same situation than they and the Germans of post WWI were?

Should we come up with a new concept where, when a nation faces what the Germans of WWI , most of 1990s African nations and now Greece is facing, the borrowing politicisations and the lending bank managers are sent to the International Criminal Court; Instead of punishing the an entire nation?

I have no idea if the author is right about everything he says here. I looked in vain for Smoot-Hawley and could not find any mention. But I don't care. If this book was fiction it would still be a strong candidate for the best book I've ever read. The fact that it takes you through the history of the Great Depression through the lives of arguably four of its biggest protagonists (the heads of the four most important central banks) is a nice bonus.

I went through this doorstop of a tome in less than three days. As an added bonus I found out what happened in the Great Depression in the view of an author who may not be a celebrated economist but is clearly totally engrossed by his subject. I was so excited about it, I sat down my poor dad to tell him the story. That bit did not go so well, he stopped me an hour into my trance.

But I digress. This book is AWESOME.

Jas
5.0 out of 5 stars A masterpiece
Reviewed in the United Kingdom on 29 October 2014
Verified Purchase
This book is a masterpiece of quality research and highly readable writing. It very clearly explains the political, economic and personal influences over the financial health of the inter-war world in a way which a non-economist can understand and even start to empathise with. The book builds up detailed portraits of not only the main central bankers of the period, but also other key characters, as they contribute to an overall narrative which of course involves financial turmoil and ultimately another world war. It is one of the most gripping non-fiction titles I have read in a long time, and I recommend it highly.
Read more
One person found this helpful
Report abuse

N. Rey
4.0 out of 5 stars Excellent
Reviewed in the United Kingdom on 20 May 2020
Verified Purchase
A good read, full of facts and lessons for the present. History, biography and economics in one.
Read more
Report abuse
See all reviews
Back to top
Get to Know Us
Make Money with Us
Let Us Help You
And don't forget:
© 1996-2021, Amazon.com, Inc. or its affiliates