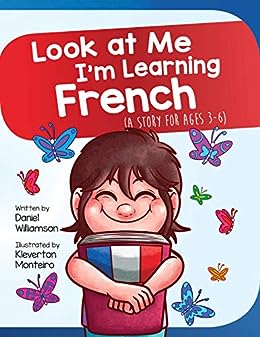 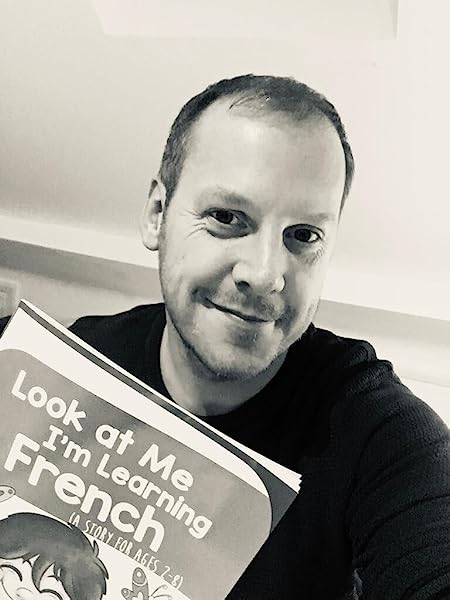 Look at Me I'm Learning French: A Story For Ages 3-6 Kindle Edition

by Daniel Williamson (Author), Kleverton Monteiro (Illustrator) Format: Kindle Edition
See all formats and editions
Sorry, there was a problem loading this page. Try again.
This new, bilingual picture book is the perfect story for young children to learn the basics of the French language. Colourful, fun and educational!

Mo has a confident spirit and a new thirst for knowledge. He wants to learn French to make more friends! Being small he starts at the beginning, learning about essentials like greeting people, counting to 10 and how to say his name!

As we follow Mo’s character and the other children through the story we discover more of the basics of the French language including subjects such as:

On every page the text is printed in both English and French so that parents or whoever reads the story can read to the child in both languages.

Adults (or the readers) are provided with the perfect, fun and colourful platform to allow the child to repeat the French language back and practice learning the words and pronunciation at ground level with the aid of playful images.

Whether a bilingual parent or just keen to teach a child a new language, this book is the perfect stepping stone to begin their French education!

Disclaimer: As this item is designed as a children's picture book it contains large, colourful images and therefore is better suited to paperback and ebook formats. It is available in kindle format but please be aware that books in this series won't be viewable in colour on certain devices and the text size may appear small to some readers.
Read more
Previous page
Next page

Daniel Williamson was born in Perivale, London 28th April 1979. After 13 years in the capital, he earned a scholarship to Bembridge Private School on the Isle of Wight, largely due to his advanced English writing skills.

During his teenage years, he participated in the school productions, band and choir and also the South Wight Youth Theatre amateur dramatic society. He was involved in productions such as Carmina Burana, Hiawatha, Peanuts and Joseph and his Amazing Technicolour Dream Coat.

After attending Nottingham Trent University 1998-2002 much of his time was spent traveling the globe, even visiting Wonders of the World such as Christ the Redeemer, The Taj Mahal and The Great Wall of China.

After the birth of his daughter Carmela in 2014 his passion for writing was re-ignited and after a brief spell of script writing he turned his attention to children's stories due to the inspiration he gained from his mother Jacqueline's Montessori nursery and his own volunteer work at Great Ormond Street Hospital.

His current titles include the 'Look at me I'm learning' series which focuses on teaching young children the basics of a new language through colorful picture books. Currently, languages include French, Spanish, German, Italian, Polish, Russian, Hindi, Arabic, Chinese Mandarin and Brazilian Portuguese. Half of the 'Look at me I'm Learning' series has also been reverse translated to 'Look at me I'm Learning English' starting in French, German, Spanish, Italian and Portuguese to help children from all over the world learn how to speak English with the aid of these educational, bilingual picture books!

After completing his bilingual picture book series (for now) Daniel turned his attention to his original passion - rhyming picture book stories. The first of which is a very humorous and original story called 'The Bee that made Jam' which is about daring to be different in a world where it's expected that everything stays the same - watch out for Old Queen Bee!!!

His next original picture book story is 'T-Rex Twins: The Brothers with Arms.' A unique look at how being born different can be your biggest strength. At first, the twins struggle to fit in and are even mocked by the other dinosaurs, after all, T-Rexes don't have long arms! But before long the unusual twins are able to help other dinosaurs and learn to comfort each other by inventing the world's first hug. Happily, this leads them to friends and popularity once the word gets out!

There are many other titles to come from this author in 2020 and beyond with multiple original stories in the pipeline. Visit Daniel's website danielwilliamson.co.uk for information about upcoming books and free giveaways! To follow Daniel on social media please search for DanWAuthor on Facebook, Instagram and Twitter!!

Miss M
5.0 out of 5 stars Brilliant and simple way to start my child learning French phrases
Reviewed in the United Kingdom on 12 January 2020
Verified Purchase
I got this book for my 6.5yr old son to help him with his French as his father is French speaking...it is brilliant and he really enjoys it great book to help my son to start learning phrases in French. Would definitely recommend. My husband think it’s a brilliant book to start my son speaking French. Everything about the book is brilliant.
Read more
2 people found this helpful
Report abuse

Madly Chatterjee
5.0 out of 5 stars Fun book!
Reviewed in the United Kingdom on 11 May 2021
Verified Purchase
I teach French online and this book is a great tool to use with my students. Learning French is much more fun through stories as children like to identify with the characters!
Read more
Report abuse

Gavin Chapman
5.0 out of 5 stars Great!
Reviewed in the United Kingdom on 12 January 2020
Verified Purchase
7yr old and 5 yr old loved this. They really enjoyed repeating the French sentences back after I said them. Good illustrations and good content. They have wanted to “speak french” every day since we got the book so we dip in and out during the day so they can learn a little bit more.
Read more
One person found this helpful
Report abuse

Amazon Customer
5.0 out of 5 stars Great book
Reviewed in the United Kingdom on 14 January 2020
Verified Purchase
My son has loved reading this book with his older sister, it’s really helped them both develop their french and made it fun too. We can’t wait to master this and get another 👌🏻
Read more
One person found this helpful
Report abuse

Amazon Customer
5.0 out of 5 stars Fantastic!!!!
Reviewed in the United Kingdom on 12 April 2020
Verified Purchase
LOVE LOVE LOVE IT, it’s fantastic in both the English and french languages, lovely pictures and has helped my daughter massively. And refreshed my french too!!! Can’t recommend these books enough 5 stars
Read more
One person found this helpful
Report abuse
See all reviews
Back to top
Get to Know Us
Make Money with Us
Let Us Help You
And don't forget:
© 1996-2022, Amazon.com, Inc. or its affiliates