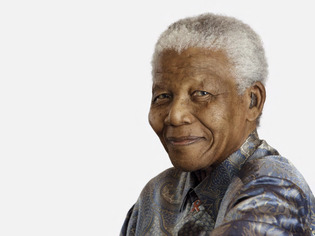 by Nelson Mandela (Author)
4.7 out of 5 stars 4,345 ratings
See all formats and editions
Sorry, there was a problem loading this page. Try again.
Read more Read less

Nelson Mandela is one of the great moral and political leaders of our time: an international hero whose lifelong dedication to the fight against racial oppression in South Africa won him the Nobel Peace Prize and the presidency of his country. Since his triumphant release in 1990 from more than a quarter-century of imprisonment, Mandela has been at the center of the most compelling and inspiring political drama in the world. As president of the African National Congress and head of South Africa's anti-apartheid movement, he was instrumental in moving the nation toward multiracial government and majority rule. He is revered everywhere as a vital force in the fight for human rights and racial equality. The foster son of a Thembu chief, Mandela was raised in the traditional, tribal culture of his ancestors, but at an early age learned the modern, inescapable reality of what came to be called apartheid, one of the most powerful and effective systems of oppression ever conceived. In classically elegant and engrossing prose, he tells of his early years as an impoverished student and law clerk in Johannesburg, of his slow political awakening, and of his pivotal role in the rebirth of a stagnant ANC and the formation of its Youth League in the 1950s. He describes the struggle to reconcile his political activity with his devotion to his family, the anguished breakup of his first marriage, and the painful separations from his children. He brings vividly to life the escalating political warfare in the fifties between the ANC and the government, culminating in his dramatic escapades as an underground leader and the notorious Rivonia Trial of 1964, at which he was sentenced to life imprisonment. Herecounts the surprisingly eventful twenty-seven years in prison and the complex, delicate negotiations that led both to his freedom and to the beginning of the end of apartheid. Finally he provides the ultimate inside account of the unforgettable events since his release that produced at last a free, multiracial democracy in South Africa. To millions of people around the world, Nelson Mandela stands, as no other living figure does, for the triumph of dignity and hope over despair and hatred, of self-discipline and love over persecution and evil.
Start reading Long Walk To Freedom: The Autobiography of Nelson Mandela on your Kindle in under a minute.

4.7 out of 5 stars
4.7 out of 5
4,345 global ratings
How are ratings calculated?
To calculate the overall star rating and percentage breakdown by star, we don’t use a simple average. Instead, our system considers things like how recent a review is and if the reviewer bought the item on Amazon. It also analyses reviews to verify trustworthiness.

Gianpaolo De Biase
5.0 out of 5 stars What a man..
Reviewed in Australia on 14 November 2019
Verified Purchase
One of the most inspiring books on leadership and tolerance written and lived by one of the most inspiring people ever existed. Lessons of humility, courage and values. Thank you for what you have done for your people and for all the people of the world, Madiba. Thank you for your sacrifice.
Read more
Helpful
Report abuse

Nambale
5.0 out of 5 stars No one is who they think they are.
Reviewed in Australia on 5 June 2021
Verified Purchase
Am sorry I didn't buy it earlier when it was released, sometimes I find myself within the book. But that's due to me growing up in *Afrika I could actually see things happening as he explains it even though I was not there at the time, that's how true this book is. It makes you think twice about who's really your friend.
Read more

5.0 out of 5 stars No one is who they think they are.
By Nambale on 5 June 2021
Am sorry I didn't buy it earlier when it was released, sometimes I find myself within the book. But that's due to me growing up in *Afrika I could actually see things happening as he explains it even though I was not there at the time, that's how true this book is. It makes you think twice about who's really your friend.
Images in this review

Colin Barr
5.0 out of 5 stars Amazing
Reviewed in Australia on 17 September 2017
Verified Purchase
How can you not give this book 5 stars. To have gone through all that and still have the will power to keep fighting. This makes me even more proud to be South African
Read more
One person found this helpful
Helpful
Report abuse

Paris
5.0 out of 5 stars Great story of our time
Reviewed in Australia on 6 August 2020
Verified Purchase
Such a good read. Great story but also eloquent writing from one of history's greatest leaders.
Read more
Helpful
Report abuse

Fay Joan McCowen
5.0 out of 5 stars LONG WALK TO FREEDOM
Reviewed in Australia on 28 May 2014
Verified Purchase
I choose Long Walk to Freedom, following seeing the movie. The book is more enjoyable than the movie, more detail, many events in the movie explained themselves as you read. Excellent story.
Read more
4 people found this helpful
Helpful
Report abuse

John
4.0 out of 5 stars Four Stars
Reviewed in Australia on 7 March 2016
Verified Purchase
My world hero so an obvious bias in favour of this tome
Read more
Helpful
Report abuse
See all reviews

Fraser Watson
5.0 out of 5 stars Yes, a must read
Reviewed in the United Kingdom on 7 January 2019
Verified Purchase
I bought this book to find out more about Nelson Mandela, apart from the news reports and the usual hyperbole, I knew next to nothing about his life. An excellent and ‘easy’ read, you can hear his voice and see his face as you read, honest with the confidence of someone who knew he was on the ‘right side of history’. He communicates easily with genuine compassion. The middle part of the book, his time in prison, is written with complete authenticity and such vivid clarity, virtually every paragraph makes you take a breath. You read how he kept his dignity, integrity and above all his humanity in the fight against a racist police state. He comes across as very stubborn, educated, tough and articulate but above all a humanitarian, something other ‘freedom fighters’ could learn from. A long read but highly recommended.
Read more
25 people found this helpful
Report abuse

J-M-Leo
5.0 out of 5 stars A must read!
Reviewed in the United Kingdom on 27 November 2012
Verified Purchase
In the wild animals kill each other for meat, only because they are hungry! They very rarely kill out of spitefulness! But man, the atrocities man inflicts on his own kind are just unbelievable! The fact that man knows right from wrong proves his intellectual superiority to the other creatures; but the fact that he can do so much wrong proves his moral inferiority to any creature that cannot! Of all the animals, man is the only one that is cruel. He is the only one that inflicts pain for the pleasure of doing it... needless to say that Mandela, a black man in his own country, in his own continent was put to prison for 27yrs by a white man! However the book shows how smart and highly intellectual Mandela was, he enjoyed reading, studying and finding out things even as a young man, and that's probably what kept him ''occupied'' in that tiny little cell on Robben Island.

Haile Selassie said in his speech at the UN on 6th October 1963: ''That until the philosophy which holds one race superior and another inferior is finally and permanently discredited and abandoned: That until there are no longer first-class and second class citizens of any nation; That until the colour of a man's skin is of no more significance than the color of his eyes; That until the basic human rights are equally guaranteed to all without regard to race; That until that day, the dream of lasting peace and world citizenship and the rule of international morality will remain but a fleeting illusion, to be pursued but never attained; And until the ignoble and unhappy regimes that hold our brothers in Angola, in Mozambique and in South Africa in subhuman bondage have been toppled and destroyed; Until bigotry and prejudice and malicious and inhuman self-interest have been replaced by understanding and tolerance and good-will; Until all Africans stand and speak as free beings, equal in the eyes of all men, as they are in the eyes of Heaven; Until that day, the African continent will not know peace. We Africans will fight, if necessary, and we know that we shall win, as we are confident in the victory of good over evil''

tubbytaffy
5.0 out of 5 stars An essential read of an extraordinary man
Reviewed in the United Kingdom on 28 April 2016
Verified Purchase
I have only just started reading this book, it is a very detailed work and as such demands and deserves full concentration. Having now learnt about Mr Mandela's childhood and the struggle of life under apartheid, it seems unbelievable that he would rise to become the leader of his country. It is a truly personal story of endurance and courage and I look forward to reading more, when tolerance and forgiveness will, I am sure, be delivered in this unique life-story. This brilliant riveting memoir has given me an enthusiasm for a book that I have not had in a very long time. Highly recommended.
Read more
9 people found this helpful
Report abuse

Emmie
4.0 out of 5 stars Great book but sometimes hard to follow
Reviewed in the United Kingdom on 28 May 2021
Verified Purchase
Mandela has an extremely interesting life story, and it is a great read. However, it is hard to keep up with sometimes. So many different names thrown in all the time! I kept forgetting who was who and what was what!
Read more
One person found this helpful
Report abuse

D Wilson
4.0 out of 5 stars An unparrelled account on apartheid
Reviewed in the United Kingdom on 14 April 2014
Verified Purchase
A classic in its own right this book is a fascinating account of one of the most important figures in the 20th century. This biography is interesting both for its interpretation of the recent history of South Africa but also for the deep personal insights into the person of Mandela.

I read this book as an academic resource but it is written in such a readable way full of personal anecdotes that it's accessible to most readers. The biography covers all of Mandela 's life from childhood right through to his presidential inauguration tracing the development of his character and ideology. It gives a clear primary account of what role Mandela played in the forming of the Youth wing of the ANC, forming its policy throughout the 50s and 60s, and his experience in prison.

The only caviet I would give is that this is a long book which can feel slightly repetitive in certain chapters but if you want an authoritative account of Apartheid and Mandela this is certainly worth the time.
Read more
5 people found this helpful
Report abuse
See all reviews
Back to top
Get to Know Us
Make Money with Us
Let Us Help You
And don't forget:
© 1996-2021, Amazon.com, Inc. or its affiliates