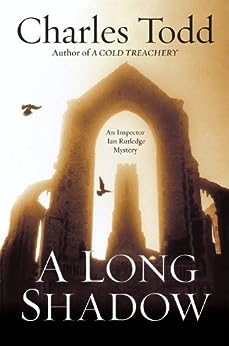 Charles Todd is a pen name used by the American authors Caroline and Charles Todd, a mother-and-son writing team who write the Inspector Ian Rutledge mysteries and the Bess Crawford mysteries, as well as stand-alone novels. Their novel Proof of Guilt was a New York Times bestseller, and A Test of Wills was named one of the Independent Mystery Booksellers Associations 100 favorite mysteries of the 20th Century and was a New York Times Notable Book of the Year selection. Their novels have won the Agatha Award, the Barry Award, and the Anthony Award, as well as being finalists for several other awards.

"A daunting portrait of a town that keeps its thoughts, its troubles and most of all its secrets to itself."--New York Times Book Review

"[A] remarkable series....Keeps readers on the edge right up to the stunning end."--Detroit Free Press

Incisive as ever. --Kirkus Reviews"

A daunting portrait of a town that keeps its thoughts, its troubles and most of all its secrets to itself. --New York Times Book Review"

[A] remarkable series....Keeps readers on the edge right up to the stunning end. --Detroit Free Press"

-A daunting portrait of a town that keeps its thoughts, its troubles and most of all its secrets to itself.---New York Times Book Review

-[A] remarkable series....Keeps readers on the edge right up to the stunning end.---Detroit Free Press

It's New Year's Eve, 1919. Scotland Yard Inspector Ian Rutledge has accompanied his sister to the home of mutual friends for dinner but gets a call from the office and has to leave. On the steps outside, he sees a brass cartridge casing, like countless others he's seen during the war. But this one has an engraving in the metal. Curious, he pockets it.

Soon after, Rutledge is on the southern coast of England helping the local police capture a murderer. Work done, on a whim he drives along the cliffs overlooking the Atlantic and takes a walk out on the headland. Returning to his car, he finds another engraved cartridge casing on the driver's seat. He's been followed.

The cartridge casing seems to point to the war and unfinished business there. To stay alive in the face of an unknown and unseen adversary, Rutledge is pressed to the limits of his skills. He's the prey. But who is the hunter?

Charles and Caroline Todd are a mother-and-son writing team who live on the east coast of the United States. Caroline has a BA in English Literature and History, and a Masters in International Relations. Charles has a BA in Communication Studies with an emphasis on Business Management, and a culinary arts degree that means he can boil more than water. Caroline has been married (to the same man) for umpteen years, and Charles is divorced.

Charles and Caroline have a rich storytelling heritage. Both spent many evenings on the porch listening to their fathers and grandfathers reminisce. And a maternal grandmother told marvelous ghost stories. This tradition allows them to write with passion about events before their own time. And an uncle/great-uncle who served as a flyer in WWI aroused an early interest in the Great War.

Charles learned the rich history of Britain, including the legends of King Arthur, William Wallace, and other heroes, as a child. Books on Nelson and by Winston Churchill were always at hand. Their many trips to England gave them the opportunity to spend time in villages and the countryside, where there'a different viewpoint from that of the large cities. Their travels are at the heart of the series they began ten years ago.

Charles's love of history led him to a study of some of the wars that shape it: the American Civil War, WWI and WWII. He enjoys all things nautical, has an international collection of seashells, and has sailed most of his life. Golf is still a hobby that can be both friend and foe. And sports in general are enthusiasms. Charles had a career as a business consultant. This experience gave him an understanding of going to troubled places where no one was glad to see him arrive. This was excellent training for Rutledge's reception as he tries to find a killer in spite of local resistance.

Caroline has always been a great reader and enjoyed reading aloud, especially poetry that told a story. The Highwayman was one of her early favorites. Her wars are WWI, the Boer War, and the English Civil War, with a sneaking appreciation of the Wars of the Roses as well. When she's not writing, she's traveling the world, gardening, or painting in oils. Her background in international affairs backs up her interest in world events, and she's also a sports fan, an enthusiastic follower of her favorite teams in baseball and pro football. She loves the sea, but is a poor sailor. (Charles inherited his iron stomach from his father.) Still, she has never met a beach she didn't like.

Both Caroline and Charles share a love of animals, and family pets have always been rescues. There was once a lizard named Schnickelfritz. Don't ask.

Writing together is a challenge, and both enjoy giving the other a hard time. The famous quote is that in revenge, Charles crashes Caroline's computer, and Caroline crashes his parties. Will they survive to write more novels together? Stay tuned! Their father/husband is holding the bets.

4.6 out of 5 stars
4.6 out of 5
283 global ratings
How are ratings calculated?
To calculate the overall star rating and percentage breakdown by star, we don’t use a simple average. Instead, our system considers things like how recent a review is and if the reviewer bought the item on Amazon. It also analyses reviews to verify trustworthiness.

Screz
4.0 out of 5 stars A good read
Reviewed in the United Kingdom on 15 November 2013
Verified Purchase
I was amazed to find that this book's author Charles Todd is actually a mother and son writing team from America. This is a well written interesting tale but definitely feels very English. The plot is unusual, unpredictable but all the better for that. Well worth a try!
Read more
One person found this helpful
Report abuse

Danny
5.0 out of 5 stars Good old fashioned English detective.
Reviewed in the United Kingdom on 23 February 2013
Verified Purchase
Excellent read,I have read all this series,so far.It does help,if possible,to read the books in sequence.--the seller,betterworldbooks,gave excellent service,as they have done,on many occasions.
Read more
Report abuse

Nanz
5.0 out of 5 stars Very Good
Reviewed in the United Kingdom on 16 April 2014
Verified Purchase
Although this is an easy and interesting read it is not quite a page turner. Delivered in the time and condition stated.
Read more
One person found this helpful
Report abuse

May Webb
4.0 out of 5 stars A long shadow
Reviewed in the United Kingdom on 28 May 2013
Verified Purchase
I look for more books about the character Ian Rutledge, a good yarn, and a great Inspector, more please and soon
Read more
Report abuse
See all reviews
Back to top
Get to Know Us
Make Money with Us
Let Us Help You
And don't forget:
© 1996-2021, Amazon.com, Inc. or its affiliates