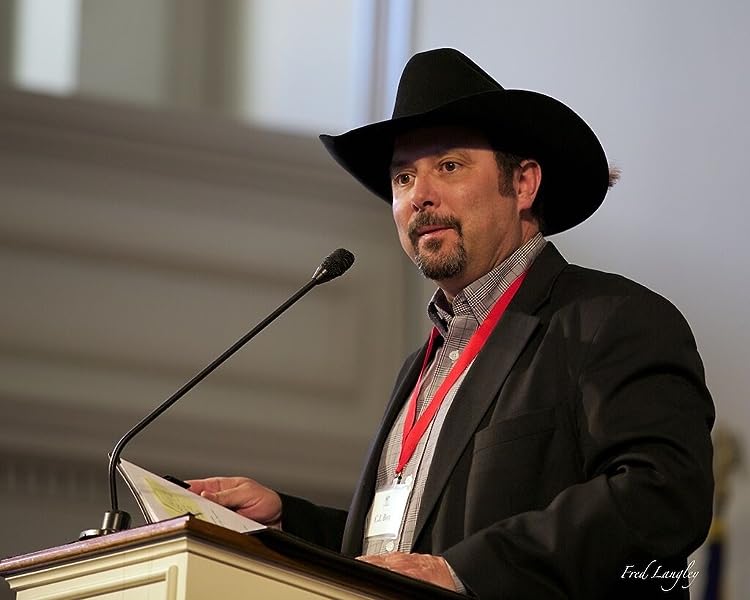 by C J Box (Author)
4.7 out of 5 stars 5,060 ratings
See all formats and editions
Sorry, there was a problem loading this page. Try again.

"[A] fast-paced, tightly written tale...The main plot, along with several subplots, is filled with so many twists and red herrings that Box keeps readers guessing almost to the end."--Associated Press "Box has established a terrific cast of Western characters... When it comes to western contemporary thrillers with intriguing characters, no one does it better than Box."--Columbus Dispatch "Long Range (with its surprise ending) shows Box has lost none of his punch as both he and Joe Pickett grow older."--Denver Post Clever plotting keeps this conspiracy yarn moving briskly, and the scenes depicting Nate's abuse while in prison are harrowing. This is another top-flight crime yarn illustrating why Box's readers are never happier than when Joe and Nate have reason to "get western."--Publishers Weekly (starred review) [An] incredibly good read, a fast-paced, riveting mystery thriller with so many twists and turns and surprises you never saw coming that it will have you on the edge of your seat all the way to the end.--Washington Times Box has secured his reputation as an author who can take this increasingly popular genre--the modern western--and make it do whatever he wants...with a clear, easy style that plays nicely against the pulse-pounding tension. Box remains the gold standard among writers of modern western-mystery blends.--Booklist Fans of this outstanding series will know better than to place their money against Joe.--Kirkus Reviews "Box has expertly woven together a tense action-filled story, a true page-turner, which incorporates greed, unrequited love, revenge and the worst of luck - luck that destroys lives and puts some favorite characters at ultimate risk." --Durango Herald

C. J. Box is the author of twenty Joe Pickett novels, five stand-alone novels, and a story collection. He has won the Edgar, Anthony, Macavity, Gumshoe, and Barry Awards, as well as the French Prix Calibre .38, and has been a Los Angeles Times Book Prize finalist. A Wyoming native, Box has also worked on a ranch and as a small-town newspaper reporter and editor. He lives outside Cheyenne with his family. His books have been translated into twenty-seven languages.
Start reading Long Range (Joe Pickett Book 20) on your Kindle in under a minute.

4.7 out of 5 stars
4.7 out of 5
5,060 global ratings
How are ratings calculated?
To calculate the overall star rating and percentage breakdown by star, we don’t use a simple average. Instead, our system considers things like how recent a review is and if the reviewer bought the item on Amazon. It also analyses reviews to verify trustworthiness.

Jill a
5.0 out of 5 stars Long Range
Reviewed in Australia on 4 March 2020
Verified Purchase
Once again CJ Box has amazed and entertained and terrified us with his story . He really gets better with time . Cannot wait until another story appears -love you CJ !!
Read more
2 people found this helpful
Helpful
Report abuse

keith falconer
5.0 out of 5 stars Wonderful
Reviewed in Australia on 25 April 2020
Verified Purchase
As usual CJ Box weaves a masterful tale that entertains to the end. A very enjoyable read. Once again I eagerly await his next instalment of one of the great series of our time.
Read more
Helpful
Report abuse

Mark Walshaw
5.0 out of 5 stars CJ Box continues this brilliant series
Reviewed in Australia on 7 August 2020
Verified Purchase
Like an old friend who you only see once a year, but carry on like you only saw them last week, CJ Box has managed to continue the Joe Pickett saga with all the same excitement and anticipation from chapter to chapter as his first installment 20 years ago. The characters are real, their relationships are true, and the writing never laborious. Bring on the next chapter!
Read more
Helpful
Report abuse

Philly
5.0 out of 5 stars Great read
Reviewed in Australia on 26 January 2021
Verified Purchase
Thoroughly enjoyed the characters and story line. A down to earth sort of read and a not want to put down story line. Really enjoyed it
Read more
Helpful
Report abuse

Ian Witten
5.0 out of 5 stars great characters
Reviewed in Australia on 25 March 2020
Verified Purchase
i think this was one of the best in the series,
Read more
Helpful
Report abuse

Dianne W
TOP 100 REVIEWER
5.0 out of 5 stars Thriller with twists and turns and great characters - masterful writing, highly recommended
Reviewed in Australia on 28 April 2020
Another great book in this series.

In this one it seems that Nate has been so domesticated with a wife and a new daughter that he's let his guard down and the story keeps you on tenterhooks as his family is stalked by some people seeking revenge for events in the last book. Meanwhile Joe is investigating the long range shooting of a judge's wife. Was she the target or was her husband the target? Joe's investigation is stymied by an incompetent sheriff with his eye on the next big leap in his own career and when the sheriff arrests Nate for the crime the reader knows that that sheriff has sealed his own fate. Alienating Joe and Nate is not usually a good career move for anyone.

This was a very well written story with lots of twists and turns. I really loved it. I particularly loved the cast of characters that turn up at the ending (no spoilers) - it was just a well written scene and just wonderful.

Kindle Customer
5.0 out of 5 stars Author of outstanding talent
Reviewed in Australia on 24 March 2021
Having read all the Joe Pickett series,I would recommend C J Box to anyone who likes crime stories with a little old West spice
Read more
Helpful
Report abuse
See all reviews

Larry
5.0 out of 5 stars Excellent series
Reviewed in the United Kingdom on 14 July 2020
Verified Purchase
I buy Kindle books when they're cheap, typically 0.99 each. If it's a series I'll buy them all when they reach my price point. Sometimes I find gems. The Joe Pickett series is a gem, he's become one of my favourite characters of all time. The books are very evocative of place and the characters are realistic and human. I love that the main protagonist is a game warden who's a lousy shot with a handgun and has a reputation for writing off his vehicles. I've just read number 20 in the series and I'd strongly recommend everyone to buy and enjoy them all immediately. Because then C.J.Box will have sufficient incentive to continue writing new adventures just for me.
Read more
6 people found this helpful
Report abuse

Kindle Customer
5.0 out of 5 stars Consistently good
Reviewed in the United Kingdom on 5 December 2020
Verified Purchase
CJ Box ,in my opinion, is amongst the elite of crime fiction writers. His primary character, Joe Picket is different to most in that he is happily married, has no dark secrets and doesn't suffer from depression or alcoholism. He is just a good guy with a strong sense of right and wrong. He is a game warden in Wyoming national park and has a tendency to stumble into threatening situations. Fortunately he always managed to come through successfully if not always unscathed.. This is usually due ,in no small way, to the help of his friends Nate Romanowski, an ex special forces man and falconeer who has no hesitation in delivering his own form of justice in protecting himself and his friend Joe. The location of the national park plays a huge part in creating the character and atmosphere around which all the action takes place. The wonderful story telling keeps you e enthralled from start to finish and the rural setting throws up a wonderful collection of interesting and eccentric characters both good and bad.l
Read more
2 people found this helpful
Report abuse

Maggie M
5.0 out of 5 stars Well, you know me by now, the greatest Joe Pickett fan ever.
Reviewed in the United Kingdom on 5 December 2020
Verified Purchase
Where do I start? The daughters have flown the nest and Joe and the delightful Marybeth are rattling around in a new big house, paid for by the state.
It's all lovely and quiet until an attempt on the judges life results in the death of his lovely and popular wife. Ok this leads to several different plot lines going on.
For those of you who don't know, Joe is prone to losing the states trucks, either by theft whatever. I was relieved to find that the truck in this case was left behind in a very safe place at the start of the story. Oh boy, I relaxed too soon.
Three plots, murder of judges wife, killing of guide by crazy grizzly bears and attempted murder of attorney.
These all fall together absolutely beautifully. Of course we have the incredible Nate who has now settled down and has a good job, a beautiful wife and a child, but we can't leave him out of the story, in fact he is a very big part of it.
Oh CJ Box how do you it. You pull me in every time. Don't stop writing. You're the best, (and Joe and Nate).
Read more
One person found this helpful
Report abuse

RonCarole
5.0 out of 5 stars Another classic from CJ Box
Reviewed in the United Kingdom on 18 June 2020
Verified Purchase
This series of books, written by CJ Box over many years, is a complete classic.
What is amazing to me is how little CJ Box and his hero Joe Pickett is known in the UK.
My mother refuses to have a Kindle but, like me, loves Joe Pickett stories. I’m trying to buy the books in paperback but finding difficulty. Come on publishers get them released in UK!
Read more
2 people found this helpful
Report abuse

Martin
5.0 out of 5 stars Mr. Box does it again!
Reviewed in the United Kingdom on 21 March 2020
Verified Purchase
Don't know and don't care where his ideas come from but wow, this guy writes a good story. Totally unputdownable. I have read all Joe Pickett books and the quality of storyline never wanes. Good luck with the next one Mr. Box. This is one reader who cannot wait.
Read more
One person found this helpful
Report abuse
See all reviews
Back to top
Get to Know Us
Make Money with Us
Let Us Help You
And don't forget:
© 1996-2021, Amazon.com, Inc. or its affiliates