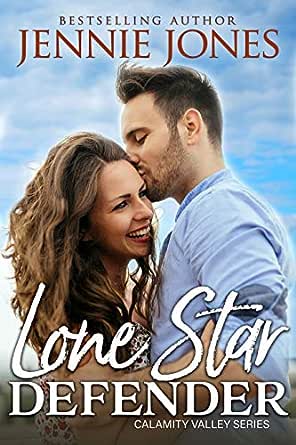 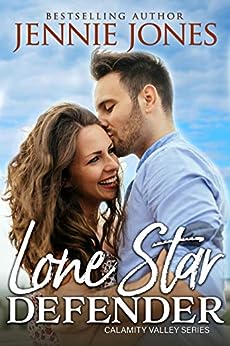 michele r
5.0 out of 5 stars True Romance
Reviewed in Australia on 21 October 2019
Verified Purchase
What a story it is a true love story, took me awhile to get into but once I did couldn't put I the down. Loved the story line never a dull moment with this one, can't wait for the next intreging volume of these MacKillop girls
Read more
Helpful
Comment Report abuse

Shelagh
TOP 100 REVIEWER
4.0 out of 5 stars Relaxing weekend reading
Reviewed in Australia on 6 August 2019
Lone Star Defender, the third and final story in the Calamity Valley series, uses a touch of magic to add interest to a modern day small town romance. This story is light and entertaining and packed with optimism as Pepper Mackillop works to revive her home town of Reckless.
Faced with underhanded dealings from ruthless developers and the curse of the great grandfathers, which has plagued her and her two cousins, Pepper made me smile. She thinks on her feet and improvises time and again to build the confidence of townspeople who have all but given up on ever making a success of their businesses. At the same time she’s fearless in the face of the theatrics the great grandfathers throw her way.
I loved Jack, Pepper’s love interest if only she knew it. Jack has loved Pepper for years while she has always regarded him as just a friend. The interaction between the two was entertaining and engaging, and I loved the way that Jack stepped up to the plate to help Pepper.
This story is a nice conclusion top the series and works well in conjunction with the first two, though it has been a while since I read them and frankly I was able to thoroughly enjoy this book as a stand alone. It makes for good relaxing weekend reading.

Claire Louisa
TOP 500 REVIEWER
4.0 out of 5 stars Romance with a touch of paranormal
Reviewed in Australia on 29 July 2019
The last book in the Calamity Valley series sees the third sister Pepper have her chance at finding Mr Right and breaking the family curse for good. Except Pepper isn't interested in finding Mr Right. Along with Mr Right and breaking a curse, Pepper has to save her town from completely dying out.

I enjoyed this final book in the trilogy, it can be read alone, I've only read books two and three, book one is still waiting quietly in the Kindle vault and I was able to grasp what was going on, I think it would flow better if you did read the series as it is written though and it's such an enjoyable series, romance with a touch of Paranormal, that why wouldn't you want to read them all.

Pepper is a headstrong character who doesn't always think before she speaks, with so many things placed on her shoulders, she seems to do it a lot, getting herself into strife more than once.

Her old friend Jack, and the person who has been tasked with keeping her safe, is a lovely guy, who has mixed emotions about Pepper.

Both are in denial of the things they really want, there's some unspoken secrets and conversations from the past that should have been worked out years ago, but are now continuing to cause issues for Pepper, Jack and some family members.

Once again the bad developer guys are back and causing plenty of trouble for Pepper and the townsfolk.

There was plenty of humour in this novel and I enjoyed once again the paranormal tilt to the story.

It seems a shame to say goodbye to Calamity Valley, but at least all three towns are in good hands.

Thanks to NetGalley and Tule Publishing for a digital copy of this book in return for an honest review.
Read more
Helpful
Comment Report abuse
See all reviews

Kindle Customer
5.0 out of 5 stars Very well done
Reviewed in the United States on 19 April 2020
Verified Purchase
This series was very well written with fun story lines and well developed characters. It was so good I couldn't stop until I had read all three books.
Read more
Report abuse

A-READER
5.0 out of 5 stars AOK.
Reviewed in the United States on 18 January 2020
Verified Purchase
AOK.
Read more
Report abuse
See all reviews
Get FREE delivery with Amazon Prime
Prime members enjoy FREE Delivery and exclusive access to movies, TV shows, music, Kindle e-books, Twitch Prime, and more.
> Get Started
Back to top
Get to Know Us
Make Money with Us
Let Us Help You
And don't forget:
© 1996-2020, Amazon.com, Inc. or its affiliates