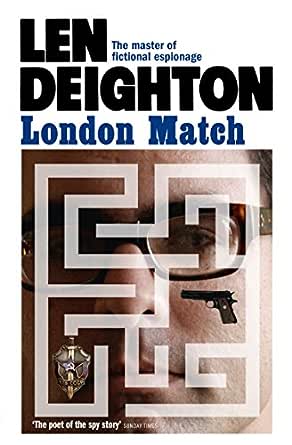 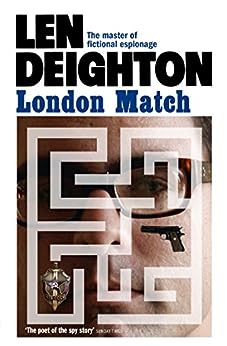 ‘Deighton is back in his original milieu, the bleak spy world of betrayers and betrayed’
Observer

‘The poet of the spy story’
Sunday Times

‘Once again Deighton has woven an intricate and satisfying plot, peopled it with convincing characters and even managed to give a new twist or two to the spy story. But then he is a master of the form’
Washington Post

Long-awaited reissue of the final part of the classic spy trilogy, GAME, SET and MATCH, when the Berlin Wall divided not just a city but a world.

The spy who’s in the clear doesn’t exist…

Bernard Samson hoped they’d put Elvira Miller behind bars. She said she had been stupid, but it didn’t cut any ice with Bernard. She was a KGB-trained agent and stupidity was no excuse.

There was one troubling thing about Mrs Miller’s confession – something about two codewords where there should have been one. The finger of suspicion pointed straight back to London.

And that was where defector Erich Stinnes was locked up,refusing to say anything.

Bernard had got him to London; now he had to get him to talk…

Aloha G
5.0 out of 5 stars Excellent
31 December 2018 - Published on Amazon.com
Format: Kindle EditionVerified Purchase
Excellent read. Wonderful tapestry of both characters and geography. Wordsmithing is Deighton’s strength and adds to a great plot. It has been long enough since the fall of the USSR and the Berlin Wall to become somewhat of a historical fiction book that sheds a spotlight on what things were like during the end of the Cold War. Highly entertaining from start to finish. Definitely recommend starting on book one.
Read more

Bookaddict
4.0 out of 5 stars Len Deighton is my favourite cold war spy author
10 August 2015 - Published on Amazon.com
Format: Kindle EditionVerified Purchase
Len Deighton is my favourite cold war spy author. He has been called the poet of the spy novel, which is a good epithet. I prefer my poetry in prose form as it comes as a surprise and is a delight especially as unexpected. In case you miss it, the poetry is in his brief but visual description of people and places. His stories are compelling, thrilling and you can fall in love with his hero, all good recommendations for a thriller. He also does not give you all the workings of the mind of his hero, so when the twist comes, it is unexpected for the reader though not for the hero. The hero is completely human and believable, but will still win at the end of the book. Good design.
Read more
One person found this helpful

Charles Sweeny
5.0 out of 5 stars with his best friend in Berlin
5 January 2015 - Published on Amazon.com
Format: Kindle EditionVerified Purchase
Bernard Samson is an officer in the British Secret Intelligence Service. His wife, Fiona, was also an officer in that Service, but has defected to Russia and is now located in Berlin as head of the Russian KGB field office there. London Match is the third novel of Len Deighton's Game, Set, Match trilogy, which ultimately became a series of nine novels which could be read in sequence or simply as an individual read. In London Match, Samson deals with a Russian KGB defector to determine if he is bona fide or part of a KGB penetration operation against the SIS engineered by his wife. Len Deighton's novels are never fast paced and Match is no exception. Rather, the characters come to life through Samson's various interactions both in the office in London, with his best friend in Berlin, with the KGB defector, and with others, all in precise British prose. I love the way in which Deighton unfolds Samson's search for the truth. Aside from his wonderful characterization and story telling, this novel and the others in the series also tells the story of the Cold War in the late 1980's before the fall of the Berlin Wall, the German Democratic Republic, and the Soviet Union. I loved each of the books in the series.
Read more
2 people found this helpful

Amazon Customer
5.0 out of 5 stars Deighton Nails the Lid Down Perfectly!
19 March 2016 - Published on Amazon.com
Format: Kindle EditionVerified Purchase
Deighton has nailed the lid down perfectly on the third book in the first set of three books in his multi-trilogy (3 sets of three books). He is an exquisite writer who knows his writing craft as well as he seems to understand his subject matter spy craft: detailed and nuanced, character driven but with plenty of plot and action. This book reads even better than when I first read the series twenty (and more!) years ago!

Bookmanic
5.0 out of 5 stars Mr Deighton
28 June 2017 - Published on Amazon.com
Format: Kindle EditionVerified Purchase
The depth of characters, accuracy of emotions, entwined in a story that is complex so that we never really know until the end. You read lots of books and most are kind of unsatisfying because the characters are formulaic super heroes, predictable, certain, always successful. This kind of book are rare and help explain the difference between, say, last train to Istanbul and real life. Thank you Mr Deighton.
Read more
Go to Amazon.com to see all 46 reviews 4.5 out of 5 stars
Get FREE delivery with Amazon Prime
Prime members enjoy FREE Delivery and exclusive access to movies, TV shows, music, Kindle e-books, Twitch Prime, and more.
> Get Started
Back to top
Get to Know Us
Make Money with Us
Let Us Help You
And don't forget:
© 1996-2020, Amazon.com, Inc. or its affiliates