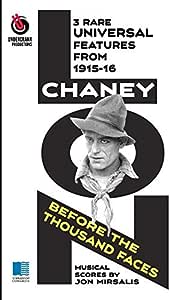 Lon Chaney: Before the Thousand Faces

LON CHANEY: BEFORE THE THOUSAND FACES contains three early feature films, made 1915-16 for Universal, in which Lon Chaney has a supporting role. These films have never been available for fans, and are seen here in new 2K scans of 35mm elements preserved by the Library of Congress. The films on this DVD were restored and scored by Jon C. Mirsalis, The films: A MOTHER'S ATONEMENT (1915) - 20 mins IF MY COUNTRY SHOULD CALL (1916) - 24 mins THE PLACE BEYOND THE WINDS (1916) - 39 mins B&W – stereo – 82 mins – not rated – NTSC – region-free – 4:3 aspect ratio New musical scores by Jon C. Mirsalis DVD released by Undercrank Productions, in association with Greenbriar Picture Shows

Fred Long
5.0 out of 5 stars and the excellent score, expertly synchronized to the action by Jno ...
Reviewed in the United States on 19 June 2018
Verified Purchase
CHANEY BEFORE THE THOUSAND FACES, A Review, by Fred Long. This DVD, an Undercrank Productions, 82 minutes, offers a rare look at an emerging talent that in a span of just three short years would share the spotlight with the immortals—Douglas Fairbanks, William S. Hart and Tom Mix, Valentino, Chaplin and Keaton—silent stars of the silver screen. Lon Chaney was not the star in any of the three features presented, but his artistry shines in each of them, most notably in THE PLACE BEYOND THE WIND (1916). Just seeing this movie, and the excellent score, expertly synchronized to the action by Jno C. Mirsalis, is well worth the purchase price. I have purchased DVDs in the past where the score is so irritating and repetitious that I have to turn it off. Not so with this DVD, nor with the other two features that make up this outstanding package: A MOTHER’S ATONEMENT (1915) and IF MY COUNTRY SHOULD CALL (1916).

Of the three, THE PLACE BEYOND THE WIND is the one that touched this poor soft heart of mine. I actually had watery eyes toward the end of the movie while watching this melodramatic tragedy unfold. Chaney is superb as the half-breed in a screenplay written by Ida May Park and based on the novel by Harriet T. Comstock. Joseph de Grasse, Park’s husband, directed and also played an important part in the film. But it’s Chaney that shines in his attempt to seduce the young innocent Priscilla Glenn (played by Dorothy Phillips) by luring her to an isolated cabin. I don’t want to give away the story, but this is a good one. Unfortunately, as it is with most of the early silent films, some of it is missing and some of it shows the deterioration of time and gross abuse. This one, and IF MY COUNTRY SHOULD CALL, were found in 1978 buried in a landfill in Dawson City, Yukon, Canada. Reel one and reel five is missing, but Mirsalis fills in the gaps with a narrative that keeps the storyline intact, and the damaged sections, for the most part, are not that intrusive. Actually, I was very impressed with the expert handling of this 102-year-old film.

IF MY COUNTRY SHOULD CALL is another melodrama written by Ida May Park and directed by Joseph de Grasse. Chaney’s performance is as different from the above film as night is to day. He is somber, serious, as he plays his character, a doctor summoned to the home of a middle-class family where the son is contemplating enlistment in the Army. It is an interesting propaganda film, coming at a time when the nation was feverish with debate over the issue of whether the U.S. should join the war in Europe. The photography, executed by King Gray, is good but not nearly as good as his work in the above film. It’s a good print for the most part, excellent when you consider that it came out of a landfill. The print does have a few problems, but not enough to obscure viewing, and again, Mirsalis does an excellent job in filling in the gaps and gives us a music score that keeps the tension alive, in spite of a rather disappointing story.

The final film, the first in this package, is from 1915—A MOTHER’S ATONEMENT. Chaney gives us a glimpse of things to come. He plays the part of a bitter, angry, old man, and except for the trained eye, is unrecognizable in makeup. He tells us, in flashback, where we see him in his younger days, out of makeup, shooting his wife with a rifle for running off with another man. And the plot thickens. This one is another from Ida May Park and Joseph de Grasse. The photography is exceptional for this period, even the use of a ghost image double exposure. It’s a three-reeler with the last reel missing, but fear not, none of Chaney’s performance is missing. Mirsalis does another excellent job in filling in the gaps and no one will be disappointed.

I would recommend this package to anyone that has an interest in the history of cinematography. These films are important to the history of our nation. They show us what our grandparents would have seen in 1915. They also depict the birth of a star that has not gone out. It’s one that a Chaney fan should not be without.

REP150
5.0 out of 5 stars Chaney's early work is hard to find..
Reviewed in the United States on 6 March 2018
Verified Purchase
Chaney's early work is hard to find. ...very few titles still exist. This collection of footage from three of Chaney's early films is a rare find.
We're lucky to have even fragments of these titles; I'm so glad they exist. I feel indebted to the people involved in preserving what we have left
of these features.
Read more
5 people found this helpful
Report abuse

Amazon Customer
5.0 out of 5 stars Great for Fans of Chaney and Early Silent Movies
Reviewed in the United States on 15 November 2017
Verified Purchase
Great for fans of the legendary Lon Chaney and of early silent movies in general. There's some deterioration, but the fact that these are part of the celebrated "Yukon Find" makes them all the more wonderful as links to history. There's some beautiful photography here and there, and at times when the image is crisp you get an impression of the gorgeous luminosity of orthochromatic nitrate film. Splendid musical accompaniment by Jon Mirsalis.
Read more
3 people found this helpful
Report abuse

David Elmore
5.0 out of 5 stars Five Stars
Reviewed in the United States on 24 April 2018
Verified Purchase
great stuff
Read more
2 people found this helpful
Report abuse
See all reviews
Get FREE delivery with Amazon Prime
Prime members enjoy FREE Delivery and exclusive access to movies, TV shows, music, Kindle e-books, Twitch Prime, and more.
> Get Started
Back to top
Get to Know Us
Make Money with Us
Let Us Help You
And don't forget:
© 1996-2020, Amazon.com, Inc. or its affiliates