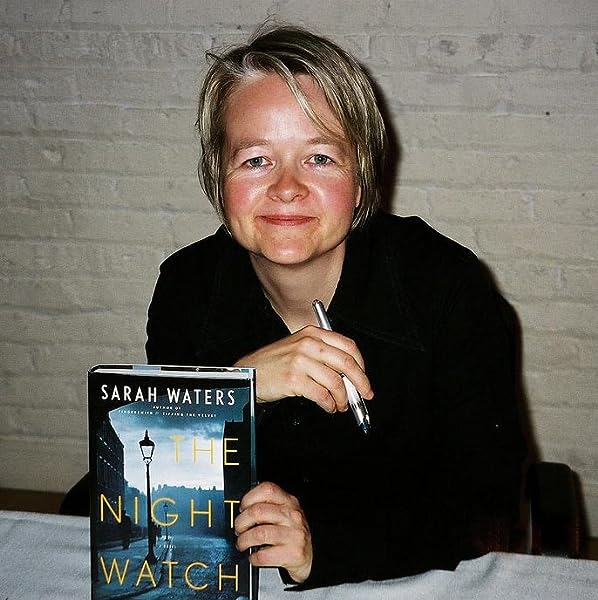 by Sarah Waters (Author)
4.0 out of 5 stars 1,199 ratings
See all formats and editions
Sorry, there was a problem loading this page. Try again.

Page 1 of 1 Start overPage 1 of 1
Previous page
Next page
Start reading The Little Stranger: shortlisted for the Booker Prize on your Kindle in under a minute.

Sarah Waters is the bestselling author of Tipping the Velvet, Affinity, Fingersmith, and The Night Watch. Winner of many literary awards, she has been shortlisted for both the Man Booker and Orange Prizes. She lives in London.

4.0 out of 5 stars
4 out of 5
1,199 global ratings
How are ratings calculated?
To calculate the overall star rating and percentage breakdown by star, we don’t use a simple average. Instead, our system considers things like how recent a review is and if the reviewer bought the item on Amazon. It also analyses reviews to verify trustworthiness.

Brooke Fieldhouse
3.0 out of 5 stars Some wonderful writing but disappointingly conventional and conventionally disappointing.
Reviewed in the United Kingdom on 8 January 2019
Verified Purchase
Don’t get me wrong, Sarah Waters’ The Little Stranger is enjoyable and compelling, so stick with me for a few seconds and I’ll explain.
Faraday, a GP with - in his own words - the appearance of a ‘balding shopkeeper’ is called out to Hundreds, the sizable home of the Ayres family in Warwickshire countryside, to attend to young maid Betty who appears to have a stomach complaint. It’s 1947 but Faraday has been to the house years before, when his mother was in service there. ‘I knew the place, I had been here before,’ strangely reminiscent of the character Charles Ryder in his opening to Evelyn Waugh’s Brideshead Revisited, and a likely indication of what the reader can expect; a decaying aristocracy, repressions, addictions, the emergence of new social order, and an unhappy? love affair.
Sure enough, Faraday encounters son Rodrick, war-damaged and edgy, meets his sister - cardigan-wearing Caroline, heavy of face, straight of leg, and he converses with their mother Mrs Ayres who seems like a slightly better-presented version of Miss Havisham. Ma Ayres is an emotional cold fish whose displacement activities consist of gazing at old family photographs and recalling her late husband ‘the Colonel.’ She wastes no time in putting Pip – sorry Dr. Faraday - in his place by presenting him with a photograph of the Hundreds’ staff taken in the 1890s(?) which according to her shows Faraday’s mother. The metaphor of cold fish is aptly and masterly developed three quarters way through the narrative in a scene in Hundreds’ walled garden during which Faraday presses his hands against the ice of an ornamental pond to let air to the imprisoned carp swimming below.
Faraday’s visits to the Ayres family increase in frequency as the narrative progresses, in fact so much of his time he's spending there that the reader is baffled by how he has time for other patients, puzzled as to how he can hold his practice together or his relationship with professional partner Dr Graham. To my mind this highlights the first of two main flaws in this novel. Faraday is the main protagonist, moreover he’s the sole narrator, but it’s Hundreds which is the seat of the action. He can't be in two places at once, so a large proportion of the narrative – including some of the most dramatic scenes – is delivered to the reader second hand - 'Caroline told me later', or 'Mrs Ayres told me later,' which gives it an air of artificiality and pushes the reader away. Perhaps that was Waters’ intention, and it’s only my view, someone else may see it differently.
The second problem is that of sowing the seed of an idea and then reinforcing that idea. It’s no spoiler to say that the house appears to have a spook. That’s what every reader wants to believe, and given the situation of weird house, eccentric family they don’t need much convincing – two or three incidents of poltergeist/ghostly activity would do the job, but Waters spends several hundred pages showing the reader what they have already taken on board, give a spook some respect! The reader wants to move on, perhaps witness attempts at exorcism, hear more about the psychology of Rodrick, or the dark side of the Colonel, but instead they’re forced to sit in frustration reading about an apparently endless war of attrition between Betty (poltergeist believer) Rodrick (believer) Mrs Ayres (believer) Caroline (undecided) and Faraday (sceptic, man of science and, ‘trust me I’m a doctor!’). The reader feels like part of the audience of a pantomime where there’re frustrated shouts of, ‘behind you!’ It might well work on screen – and I’ve not seen the film of the same title – in tension build and suspense, but on the page, it seems to be overworked, over-written, and occasionally tedious. I emphasize, my view alone, others may see differently.
There’s some wonderful writing though. In one scene, Faraday – who begins to think he might do worse than marry ‘plain old Miss Caroline Ayres’, takes her to a doctors’ dance. It’s written in immediate scene, brings the reader straight into the action, and gives real substance to the relationship between Faraday and Caroline. There’s a scene in Faraday’s car ‘after the ball has ended’ and it made this reader – anyway – wistful of perhaps not having gone to enough dances in his youth, and rather conscious of his own clumsiness. First rate!
The question I found myself left with was, why did Waters not give Caroline a point of view -POV- of her own, then the reader could experience her mood and feelings first hand. It needn’t have weakened the denouement, nor explained the oddness of Caroline, but in my opinion it would have made better literature, rather than the work reading like an over-sized maquette intended to be later handed over to a screenwriter for the ‘serious’ business of film making?!
Read more
24 people found this helpful
Report abuse

fussybuy
1.0 out of 5 stars Shockingly awful!
Reviewed in the United Kingdom on 9 April 2019
Verified Purchase
I was really looking forward to reading this book, especially when one of the comments on the cover suggested you'd want to sleep with the light on, after reading it. I kept wondering whether to carry on with it or not. Every time there was a tiny hint that something vaguely atmospheric might be about to happen … nothing! It was all so totally boring and way too long for such an uninspiring read. It was pure drivel. I can't believe it was ever published.
Read more
14 people found this helpful
Report abuse

Natasha Alsop
1.0 out of 5 stars Long-winded...
Reviewed in the United Kingdom on 15 February 2021
Verified Purchase
I first read this around a decade ago and as I planned to watch the film, I wanted to reread it first. All I could remember was one particular incident from the novel so I was really keen to read it again... and I wish I hadn't! From about 60% onwards I found myself skimming pages and pages to just get to the conclusion, which was a massive damp sqiub. The book could've been cut down by at least half the size and kept a much better pace. By comparison, I read Tipping The Velvet a year or two ago and massively enjoyed it.
Read more
One person found this helpful
Report abuse

Amazon Customer
5.0 out of 5 stars What a brilliant read
Reviewed in the United Kingdom on 14 August 2018
Verified Purchase
I absolutely loved this book and could not put it down, thankfully I was on holiday so was able to read it on a sunbed between swims.
I had previously read paying guests, I love the way she writes drawing you in to the character’s personalities . Will definitely read her other books ,2 of which have been televised, hope this one is too.
Read more
6 people found this helpful
Report abuse

PrideOfNottingham
5.0 out of 5 stars Expertly written slow burning period gothic
Reviewed in the United Kingdom on 10 March 2021
Verified Purchase
I loved this. Its probably the best traditional English ghost story written for a while but it is more...it has a wider human dimension than a typical M R James short story.
It brilliantly evokes a crumbling mansion and the days of post-war austerity. It is about class in a way and the envy of wealth.

There is inevitably a feminist angle but its subtly done without beating the reader over the head with the obvious inequality of the time.
I would read more Sarah Waters on this basis as she is clearly a skilful writer...whether her "lesbo romps" (her words) will draw me in so much who knows but this was very good.
Read more
Report abuse
See all reviews
Back to top
Get to Know Us
Make Money with Us
Let Us Help You
And don't forget:
© 1996-2021, Amazon.com, Inc. or its affiliates