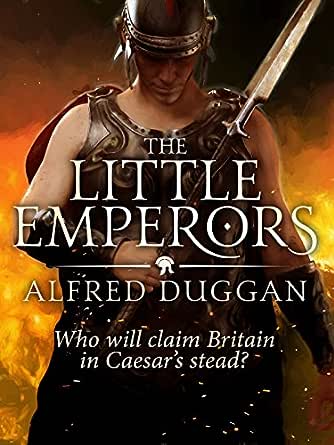 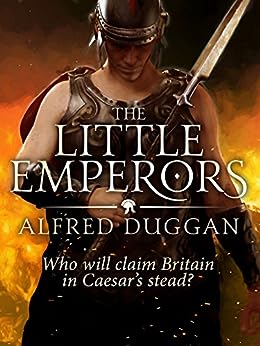 A classic novel set in Dark Age Britain. Through the eyes of a British official in Roman Britain we see successive would-be emperors fight each other while the Barbarian threat grows ever stronger.

As barbarian hordes cut Britania off from Rome, ‘little emperors’ step into the power void…

Having served at the Imperial Court itself, Felix, treasurer of Britannia, struggles in provincial Britain. Every penny is needed to fight the invading barbarians.

Preoccupied with status and finances, he barely notices that his wily father-in-law is engineering a coup – one which forces Felix to flee for his life.

Barbarians have cut off contact with Rome and ‘little emperors’ are springing up across Albion, ready to rule in Caesar’s stead. Who will survive this dangerous game of power?

An extraordinary novel of the Roman empire, filled with intrigue and danger, perfect for fans of Simon Scarrow, Ben Kane and Christian Cameron.

‘A story of intrigue and revolt, of suspense and action... Duggan is an enormous talent.’ Queen

Kindle Customer
2.0 out of 5 stars An Admin Tale
Reviewed in Australia on 19 May 2018
Format: Kindle EditionVerified Purchase
If the details of taxes and office admin are exciting to you this is your tale. While meticulously researched apparently we are assured that Christianity was established as an anti Roman movement. I find it hard to read hard to like any character and depressing
Read more
Helpful
Comment Report abuse
See all reviews from Australia

gerardpeter
4.0 out of 5 stars End of Empire
Reviewed in the United Kingdom on 23 May 2018
Format: Kindle EditionVerified Purchase
This well-crafted novel about the last days of Roman Britain published in 1951 is still a good read. It combines historical substance with a powerful plot and strong characters to chart the fall of an Empire.

His basic view , contrary to Gibbon, is that there was not so much of a decline as a rapid fall in the first decade of the 5th century. The legions left for Gaul in 410 and never came back. Britannia was undone by the greed and ambition of corrupt businessmen, ambitious soldiers and scheming wives

The narrative is organized round a high civil servant, C Sempronius Felix, the treasurer of Londinium. Felix is an old Roman, seeking to act in the manner of the ancients and punctilious in his duties. Our sympathy for him is tempered by his willingness to ruin farmers, execute criminals and torture slaves – all in the name of his precious civilization. Duggan sends him on the road to wisdom and self-discovery. His journey in the later chapters borrows references many sources, not least King Lear.

In 1951 another Empire was fading and new directions were being sought for Britain. The author mentioned this in the epilogue and it must have influenced him. Duggan noted that he had sought to get the history correct, but that much was unknown [then] and little written.

It remains a good read and a good character study. Those impressed could hunt out the many modern histories now available, which are based on recent archaeology and the considerable advances in our understanding of this period..
Read more
One person found this helpful
Helpful
Sending feedback...
Thank you for your feedback.
Sorry, we failed to record your vote. Please try again
Report abuse

Bear G
3.0 out of 5 stars Dry
Reviewed in the United Kingdom on 12 July 2019
Format: Kindle EditionVerified Purchase
Not a particularly engaging book and it was difficult to feel for the main characters.
A bit of an insight into the last days of the empire but very dry.
Read more
Helpful
Sending feedback...
Thank you for your feedback.
Sorry, we failed to record your vote. Please try again
Report abuse

will1957
4.0 out of 5 stars Not as engaging as his other books
Reviewed in the United Kingdom on 23 August 2011
Verified Purchase
I have read a few of Duggan's books and enjoyed them immensely. The writing is typical of Duggan with enough dry humour and cynicism to entertain. However, I found "The Little Emperors" less than wholly engaging because I could not empathise with Felix, the main character in the book. In addition, the transformation of Maria, Felix's wife, from dutiful wife to conspirator and sadistic torturer stretched my credulity a bit - she must have hidden it well.
Read more
2 people found this helpful
Helpful
Sending feedback...
Thank you for your feedback.
Sorry, we failed to record your vote. Please try again
Report abuse

Dee
5.0 out of 5 stars great condition and subject matter.
Reviewed in the United Kingdom on 24 August 2019
Verified Purchase
in brilliant condition even better than described .
Totally awesome 5 stars'
Read more
Helpful
Sending feedback...
Thank you for your feedback.
Sorry, we failed to record your vote. Please try again
Report abuse

Stephen Arnott
5.0 out of 5 stars Exceptional
Reviewed in the United Kingdom on 8 February 2010
Verified Purchase
A very impressive novel charting the ups and downs of the 'Little Emperors' who attempt to seize control of Britain after it is cut off from Italy by the barbarian invasion of Gaul. Duggan weaves a credible and exciting story around the few facts that are known of the period and reminds us that, far from being a slow decent, the Roman Empire fell, finally, very quickly from a position of power that had looked unassailable.
Read more
One person found this helpful
Helpful
Sending feedback...
Thank you for your feedback.
Sorry, we failed to record your vote. Please try again
Report abuse
Load more international reviews

lhksymons
5.0 out of 5 stars Reread
Reviewed in the United Kingdom on 8 July 2018
Format: Kindle EditionVerified Purchase
I first read this book many years ago
Still as good a read as ever.His other books are certainly worth re reading
Read more
Helpful
Sending feedback...
Thank you for your feedback.
Sorry, we failed to record your vote. Please try again
Report abuse

John Everett
5.0 out of 5 stars Roman Britain
Reviewed in the United Kingdom on 26 May 2017
Verified Purchase
Fascinating insights into the last years of Roman rule in Britain. A fine tale and character study, which I enjoyed reading.
Read more
Helpful
Sending feedback...
Thank you for your feedback.
Sorry, we failed to record your vote. Please try again
Report abuse

Tim62
5.0 out of 5 stars Enthralling tale of the end of an era
Reviewed in the United Kingdom on 22 September 2006
Verified Purchase
Alfred Duggan's hero is the completely un-heroic senior administrator, Felix, - who as the treasurer of Britain in the early years of the fifth century AD is struggling to presve his province and himself.

Duggan writes well, because we see the crisis of these years therough Felix's eyes. His is initially a world dominated by court protocol and administrative problems. But gradually he comes to realise - as do we - the overwheening political ambitions of those around him as they jockey for power - the 'Little Emperors' of the title.

Duggan's tale is set against a fully-functioning Roman Britain -- which collapses suddenly almost overnight as a result of the disruption caused to the province by the barbarian invasions of Gaul and its consequent separation from the rest of the Roman Empire.

Whether things really happend like this I am not sure, but what I am sure of is that Duggan's work is well worth reading. I am so glad that this, and his other books are now being re-published - it's about time.

Duggan is one of a wonderful quartet of British fiction writers of the last century. Duggan, along with John Masters, Wallace Breem and George Shipway all wrote stories on imperial themes. The common link betwewen them was India. Masters, Breem and Shipway had all served in the British Indian Army. Duggan did not, but he was stepson of Britain's grandest imperial viceroy, Lord Curzon, and he did serve in the British army in WW2.
Read more
8 people found this helpful
Helpful
Sending feedback...
Thank you for your feedback.
Sorry, we failed to record your vote. Please try again
Report abuse
Load more international reviews

Fren
4.0 out of 5 stars I read this many years ago and I was pleased to get the chance to read it again
Reviewed in the United Kingdom on 21 December 2012
Verified Purchase
Alfred Duggan wrote a range of historical novels, often about people I had never heard of before. His books are interesting.
Read more
One person found this helpful
Helpful
Sending feedback...
Thank you for your feedback.
Sorry, we failed to record your vote. Please try again
Report abuse

Jeffrey F. Bell
5.0 out of 5 stars The best novel about the fall of Rome
Reviewed in the United States on 28 March 2007
Verified Purchase
Most novels about the Fall of Rome don't interest me, because their authors favor the Empire. I have always rooted for the barbarians, because in my view Rome was a deeply sick society after the "reforms" of Diocletian.

But one can always count on Alfred Duggan for an unusual take on familiar history. There are no barbarian hordes or savage battles in this book. Instead it tells the story of the Roman collapse in Britain from the viewpoint of a fictional senior civilian bureaucrat named C. Sempronius Felix, Praeses of Britannia Prima.

A Preases is a very busy man. In the morning, Felix and his staff fix all prices, ration all food, approve all marriages, punish anyone who attempts to change jobs or marry out of her class, and ruthlessly collect punishing taxes to support a huge incompetent army that never fights. In the afternoon, Felix acts as judge in politically fixed trials. On weekends he orders emigrants burned at the stake.

Felix's Rome is a rigid totalitarian nightmare where citizens have become slaves and slaves have become pieces of furniture. But like a typical Duggan character, Felix is oblivious to reality and thinks he is upholding "civilization" instead of wrecking it. After ten years in London, he hasn't even bothered to find out who the local secret police chief is. He is easily manipulated by his wife and father-in-law into supporting a series of usurpers who predictably turn into megalomaniacs. You want to kick Felix but you can't stop reading.

Evelyn Waugh wrote of Alfred Duggan that "he surveyed contemporary history with nothing but calm despair", and there are usually no detectable commentaries on current events in his writing. But I see this book as a warning to the British ruling class of 1950 who were rapidly heading toward Diocletianism (despite their classical educations). When his proto-Thatcherite wife suggests returning to a free-market economy, Felix responds with all the classic XXth-century arguments for government planning.
Read more
22 people found this helpful
Helpful
Sending feedback...
Thank you for your feedback.
Sorry, we failed to record your vote. Please try again
Report abuse