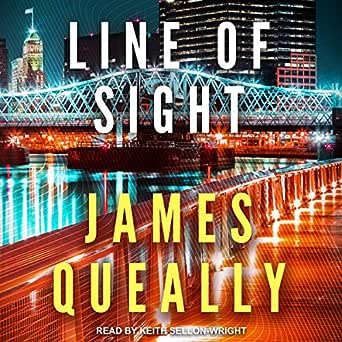 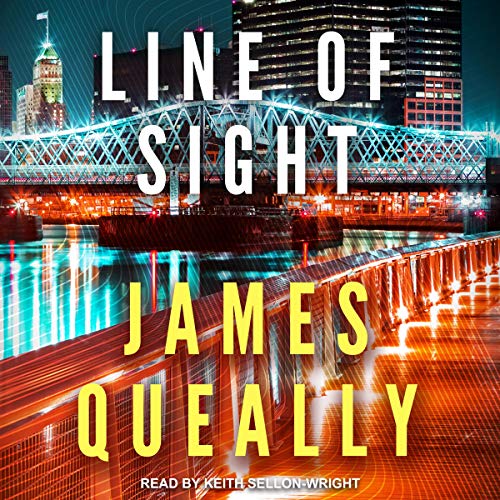 Jim Thomsen
4.0 out of 5 stars Crime, Cops, Crooks, Reporters, Race and Newark, in an Authoritative Crime Novel
Reviewed in the United States on 12 May 2020
Verified Purchase
LINE OF SIGHT is an impressive blend of thematic depth, admirable ambition, and unimpeachable authority that has a lot to say about journalism, racial tensions, urban corruption and civic pride. And it has some weaknesses that keep it in the "merely really pretty good" category and out of the "great" one.

The good stuff is really pretty really good, however. Queally, an East Coast native who worked for the Star-Ledger newspaper of Newark before making a national name for himself as a crime reporter for the Los Angeles Times, shows that you CAN go home again. And shows it ably in his story of Russell Avery, a former journalist turned private eye who mostly makes his living fixing legal problems for Newark cops who cross the line—and in the process, for the people whose lines got crossed. ("In the span of five minutes I’d helped a dirty cop keep his job and likely financed a month of cocaine sales for Antonio" and "Whole lot of vice detectives who claimed their wives were cheating and asked me to follow them. Most just wanted me to keep tabs on their beloved so they could sneak off with their own side pieces.")

Bu it's hard to live in the gray where there so much black and white all around, however. And so, when a community activist comes to him with a story about Newark cops — possibly the same crew Avery works for — being responsible for the death of a couple of black teen drug dealers, he's got to pick a side. And he's got to hope it's not just the right one but the last one standing.

Queally, through Avery, is appealingly clear-eyed about both his city and his former profession — Avery constantly leans on connections forged through his newspaper days along his winding path to what really happened. LINE OF SIGHT is consistently quotable in that regard:

"Reporters are, by trade, egomaniacs. We can be sympathetic, empathetic, careful and concerned about the people whose stories we tell. But part of the drive to uncover some amazing tale is knowing your name might be synonymous with the story."

"When the paper got all web-savvy, I should have seen the change coming. Should have known (the editor would) push the parent company’s agenda because he had a house in Short Hills with a mortgage that made my student loan debt look like the cost of a middling first date."

"The hardest part of cracking a story isn’t learning something you’re not supposed to know, it’s figuring out when you can share that something. Journalists are notoriously terrible at keeping secrets. It’s why no one can even think about sleeping with a fellow reporter without an entire newsroom knowing all your kinks."

"The newspaper had mutated from the place that raised me, the place that held the city accountable, to an awkward appendage that waived around and counted clicks, using some impossible calculus to determine news."

Queally also knows Newark, and how it works:

"Then there’s an administrative hearing. You know how often that ends with the cop getting in trouble? Carry the one, round down to zero, and it’s right around never."

"It would be the first time in at least five years that homicides climbed above the century mark, and Newark’s popular mayor, who everyone expected would run forSenator soon, had declined comment for the story, probably because he was too busy strangling the police director to pick up the phone."

"Your son isn’t the first person whose death I’ve seen go unrecognized in this city, and we both know it won’t be the last. That’s Newark, sadly."

Cops, journalists, crime, big city, elusive truth. Queally keeps this five-ring circus moving in fine working order for the most part, weaving a complicated but not impossible-to-tangle plot. And when everything and everyone is finally dragged from the darkness into the disinfecting sunshine, what's revealed are shades of gray everybody can live with — or at least begin working with. And Russell Avery, more than half bent as the book begins, finds a moral equilibrium from which he can begin walking straight again.

Pretty good stuff. But ... not great. Why? Three key reasons:

— The trope of The One White Man Who Can Talk to Black People is an oily and uncomfortable one, and especially so in 2020. Maybe this says more about publishing than storytelling, but I wish somebody would speak squarely to this question: Why do book readers require a white interpreter for Black America? Where's the black writer who's being given a publishing contract to tell the story of Black Newark? The Great White Interpreter of Newark was previously and more cringe-inducingly rendered in the Carter Ross mysteries by Brad Parks — like Queally, a former Star-Ledger scribe — and one would have hoped that racial sensitivities would have improved in the decade since Parks' first Carter Ross book and Queally's, given all that's happened to expose the peeling veneer in race relations during that time. At least Queally is less gleeful about it than Parks, whose Ross novels lean wolfishly into full-blown White Savior Syndrome. Maybe it's not fair that LINE OF SIGHT has to live in that shadow. But maybe it's not fair that Newarks national image is still largely mired in the city's 1967 race riots, either.

Maybe the question is better parked with Polis Books, which has otherwise proven to be an aware and enlightened book publisher about matters of race (witness its Edgar Award-nominated THREE-FIFTHS, by John Vercher, truly a remarkable achievement).

— There's a chunky-style quality o the prose, an accretion of overstuffed sentences, that often acts as a drag on what should be a page-turning genre novel. Some examples:

"A stream of leaves and withered cigarette filters swirled along the sidewalk as I walked up to the group, the wind making a rustling sounding like a bag of potato chips being used as a punching bag."

"The glass slid down to reveal one half of a salt-white chin strap beard and a set of crow’s feet stacked like a stepladder. The face turned slowly, bringing the matching features on the other side into view, all anchored around browned lips that were always puckered into a coiled spring."

"I put the device into burst mode, got more than a few shots of Faltz wrestling the wannabe pit boss into submission, and lowered the camera just in time to see a combat boot slice within a few centimeters of Dina’s face, just close enough to tussle those long locks I’d been fawning over upstairs."

"She shot me a sideways look as we sized each other up, the burning hockey paraphernalia highlighting us in smoke as the rogue protesters kept doing damage nearby."

They read a lot like the sentences that reporters write when they're trying to compress an accumulation of facts into a prescribed newshole space. Say, cramming 25 inches of material into a 15-column-inch space. I did that a lot myself in my own reporting career, and the result looked a lot like Queally's fictional rendering of a news story deep into LINE OF SIGHT (possible spoiler alert):

"The shooting death of a former Newark homicide investigator was linked to a widening corruption scandal that could lead to the retrial of hundreds of defendants and has reignited calls for federal oversight of the state’s largest police department, according to multiple city officials and law enforcement sources."

I get it, kind of. Queally wrote LINE OF SIGHT while working as a reporter, and as an ex-journo myself, I can see how difficult it must be to toggle between Reporter Brain and Novelist Brain in the course of a single day, day after day. My advice would be the same advice I give many of my author clients — read your sentences aloud, see how they flow into one another, see how they can best be crafted to create a sense of glide on a current of perpetually pleasant uncertainty.

— The copy-editing and proofreading in LINE OF SIGHT is terrible. Unforgivably bad. No other way to put it. Whoever had the job of red-penning this manuscript had an outright indifference or ignorance regarding commas, hyphens and homonyms. Among other things. A sampling of several dozen objective errors I highlighted in the text:

"Frank was on top of me in seconds, pinning me down and reigning blow after blow...."
"I nearly jumped out of my seat when I heard the wrap of someone’s knuckles against my window."
"I waived him off and tried to figure out who I was talking to."
"Whoever was following me wasn’t being terribly discrete about it."
"Collen" (instead of Colleen)
"Alright" (no style guide supports this as a preferred usage over "all right.")
"'I don’t have a problem with protesting Dina,' I said."
"For all her sometimes radical talk, Key could have made money in public relations if she wanted too."
"None of the nonsense that will make my editors heads spin.”

Queally doesn't deserve such shoddy service. My hope is that his publisher fixes the ebook edition right away, and does the same for the print edition should it sell well enough to merit a second printing. Which, on its merits, it does.

TDP
5.0 out of 5 stars A knockout
Reviewed in the United States on 22 March 2020
Verified Purchase
This debut novel is a knockout! It reads more like a crime novelist's 20th book, not his first. James Queally somehow mastered the genre on his first attempt.
There are several factors that make Line of Sight a must-read for fans of cop thrillers. First off is the writing. It's flawless, fast-paced and intelligent. Second is the attention to detail, something the author must have honed during his years as a newspaper reporter. The images, characters and locales are crystal clear.
But what separates this from run-of-the-mill crime novels is ethics. James Queally seems to understand that there are two sides to every story -- and that it takes dedication to get beyond first impressions -- and both sides of the story must be told. But in the end, truth and justice are paramount.
His characters are rich, and you're never sure exactly which side they're on. Sometimes they can play both angles.
The book also is unafraid to open up the debate about Black Lives Matter in a smart, careful way. As the Buffalo Springfield sang, nobody's right if everybody's wrong.
Bravo to Mr. Queally. Can't wait to see what he comes up with next.
Read more
Helpful
Sending feedback...
Thank you for your feedback.
Sorry, we failed to record your vote. Please try again
Report abuse

Lisa Fiorenza
5.0 out of 5 stars Fun, fast-paced read
Reviewed in the United States on 30 March 2020
Verified Purchase
Really fun read that draws you in from the very beginning. Russell Avery is a relatable protagonist, and the story moves along quickly, keeping you interested throughout. I had to get my mom off the phone so I could finish the last 40pgs (please don’t tell)!
Read more
Helpful
Sending feedback...
Thank you for your feedback.
Sorry, we failed to record your vote. Please try again
Report abuse