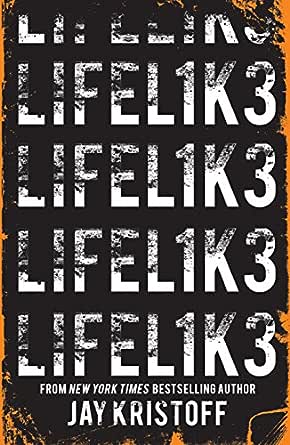 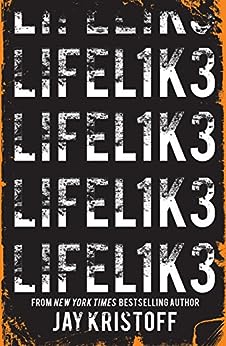 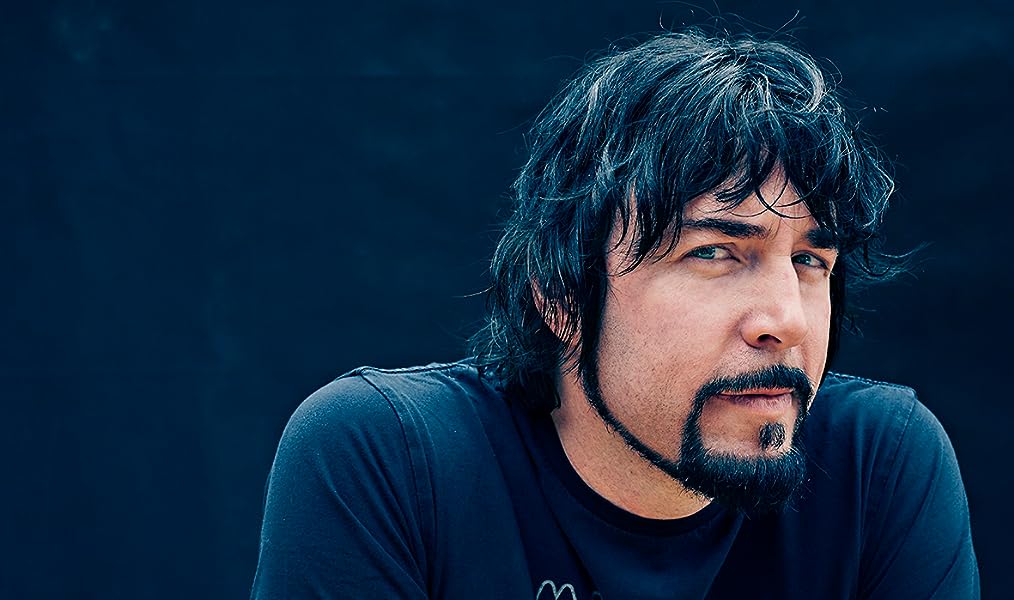 ‘Kristoff's vivid world of grit, metal, and technology evokes all the senses, and his characters every emotion. This is a breathless, action-packed exploration of what humanity really means’
Marie Lu, #1 NYT Bestselling Author of WARCROSS and THE YOUNG ELITES

‘Fierce friendships, brutal heartbreak, and the question of what makes us who we are–in the midst of a seriously awesome and terrifying post-apocalyptic world–make LIFEL1K3 your next favorite book. Trust me’
Kiersten White, NYT Bestselling Author of AND I DARKEN

‘I'd like to live in the vivid and raw world of LIFEL1K3, if only I wasn't certain it would kill me. Jay Kristoff delivers an utterly unique and entirely brilliant story with his signature punch-to-the-gut writing that will leave you bruised but longing for more’
Beth Revis, NYT bestselling author of STAR WARS: REBEL RISING and the Across the Universe trilogy

IT'S ROMEO AND JULIET MEETS MAD MAX MEETS X-MEN, WITH A LITTLE BIT OF BLADE RUNNER CHEERING FROM THE SIDELINES

On an island junkyard beneath a sky that glows with radiation, a deadly secret lies buried in the scrap. Seventeen-year-old Eve isn't looking for trouble-she's too busy looking over her shoulder. The robot gladiator she spent months building has been reduced to a smoking wreck, she's on the local gangster's wanted list, and the only thing keeping her grandpa alive is the money she just lost to the bookies. Worst of all, she's discovered she can somehow destroy machines with the power of her mind, and a bunch of puritanical fanatics are building a coffin her size because of it. If she's ever had a worse day, Eve can't remember it.

The problem is, Eve has had a worse day--one that lingers in her nightmares and the cybernetic implant where her memories used to be. Her discovery of a handsome android named Ezekiel-called a "Lifelike" because they resemble humans--will bring her world crashing down and make her question whether her entire life is a lie.

With her best friend Lemon Fresh and her robotic sidekick Cricket in tow, Eve will trek across deserts of glass, battle unkillable bots, and infiltrate towering megacities to save the ones she loves ... and learn the truth about the bloody secrets of her past.
See all Product description

Kindle Customer
5.0 out of 5 stars Page turner
19 July 2019
Format: Kindle EditionVerified Purchase
Can't wait to read the next....WOW. I cannot believe it has taken me so long to find this Author. Thank you for helping me escape to another place I would never otherwise have experienced.
Read more
Helpful
Comment Report abuse

Marie Davies
5.0 out of 5 stars What a ride!
5 June 2018
Format: Kindle EditionVerified Purchase
A great fast read that will twist and turn all the way. Loved the works and characters and can’t wait for the next book. Seriously.
Read more
Helpful
Comment Report abuse

Caitlin
5.0 out of 5 stars Lifel1k3 - by Jay Kristoff
23 May 2018
Format: Kindle Edition
"Hey, you. Yes, you. Put this grimy, beautiful, devastating, hilarious, screaming, writhing, all-out post-apocalyptic girl-buddy-road-warrior-lost-princess-techno-thriller in your face and read it right now. It is every kind of badass." - Laini Taylor (blurb from the back cover of the book)

Oh. My. Goodness. Laini Taylor's quote about this basically sums up how I'm feeling right about now. I really don't want to wait until May 2019 for the next book in the trilogy, that's how good it is. The picture also doesn't show it but the coppery colour on the edges of the front and back cover are metallic and shiny and oh-so-cool!

I like that we see action within the first chapter so it doesn't take too long to get into it.

There were so many awesome points to this book.

It's easier to base something from something else than it is to create something from nothing, so the lifelikes were modeled off the Monrova family. Grace from Eve's mother Alexis, Gabriel from her father Nicholas, Raphael from the eldest sister Olivia, Hope from the second youngest sister Marie, and Faith from Eve herself.

I liked that the twelve lifelikes were named after angels and virtues. Gabriel, Ezekiel, Uriel, Raphael, Michael, Daniel, Hope, Faith, Patience, Verity, Grace, and Mercy. It was also good that they had the same emotional capacity as an adult, but without the knowledge or experience of how to deal with them.

It was good to see that when restarting Myriad, four things were needed (voice ident, retinal scan, blood sample, brainwave imprint) and it took at least twenty minutes too boot up - not simply an instant restart and away you go...

The flashbacks were interesting to watch unfold. Also the layout of the pages towards the end where a character's mind spirals a bit was really nice to see. It reminded me a bit of the layout of the Illuminae Files trilogy.

The language was a bit to take in a first, but I managed to wade my way through it. Some of the language I had to figure out, like 'sprogs' and 'fugazi'. And some was pretty self explanatory, like 'bestest', 'brainmeats', 'fizzy' and 'recyc'.

One theory that I had was that the area was called Dregs because it's what remains once everything good has left, such as humanity. Kind of like how the few tea leaves and the little half-sip of tea at the bottom of the mug are called dregs.

There was only one point when I was confused about what was happening, but it's sort of self explanatory as to why that was when you get up to that part in the book. It also made my mind spin out of control with theories...

"Stronger together, together forever."

Greggorio!
TOP 50 REVIEWER
5.0 out of 5 stars TRULY GREAT STUFF!!!!!
10 June 2018
Format: Kindle Edition
This YA romantic sci fi thriller about a post apocalytpic Earth is one of the surprise reads of 2018. Book one of a trilogy, the ending will leave you on such a fantastic cliff hanger that you will have trouble believing that book two won't come out for close to 12 months. The book begins in such heart breakingly violent fashion that it is also hard to believe that it was written for kids. Well, young adults, to be more precise. But then it evolves into an obvious teen romance, with excellent, traditional and very respectful science fiction elements thrown in but the reader is none the poorer for that, even if you are old enough to be the grand parent of the book’s target audience. The writing is perfectly pitched, with flashbacks at the start to each chapter, tearing you (and your heart) away from the current time events, and these are so gorgeously written that they soon become the book’s highlights.

Without giving too much away, a young girl finds herself witness to thr brutal murder of her family, and finds herself trapped in a new world where she battles armoured tech in public fights to earn money that funds her grand father’s medication. But just like in all good tales, love soon comes storming in to upset the plans of all good men (and women) and the certain young lady who witnessed her family’s destruction at the start doesnt know where to turn (or look) for the love she feels for the young man blocking her vision.

But great tales have twists and turns stronger and heavier than the world’s mightiest rivers and this book has them in abundance. You will have trouble believing your eyes as you try to follow the plot, but one baddie appears only to be replaced with another and soon enough, fighting for money is replaced with fighting for one’s life in the streets. Its a good thing our heroine (victim) has good friends to rely on, as she will need them in order to see through the book’s finale. And what a finale it is. Sure to leave you breathless, and certainly impatient for book two, it wasnt until the very final chapter that you might predict how this opening volume will turn out. And yet its literally the book’s final sentence where the author’s true genius comes to the fore with a plot twist so shocking and strong and brilliant it will give you whiplash. And that is no exaggeration.

At this book’s 75% mark i was happy to give it 4/5 stars and i was keen to start something else. In a two hour session this afternoon, i sat enthralled and totally entertained by this amazing book written for the adults of tomorrow. So it is clearly worth full marks and the book is also clearly worthy of formal industry recognition. A great surprise, a great story, written by a great author. Truly Great stuff.
Read more
Helpful
Comment Report abuse
There are 11 customer reviews and 14 customer ratings.
See all 11 customer reviews
Write a customer review

Go to Amazon.com to see all 149 reviews 4.4 out of 5 stars
Get FREE delivery with Amazon Prime
Prime members enjoy FREE Delivery and exclusive access to movies, TV shows, music, Kindle e-books, Twitch Prime, and more.
> Get Started
Back to top
Get to Know Us
Make Money with Us
Let Us Help You
And don't forget:
© 1996-2020, Amazon.com, Inc. or its affiliates