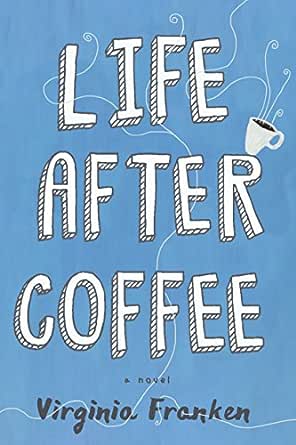 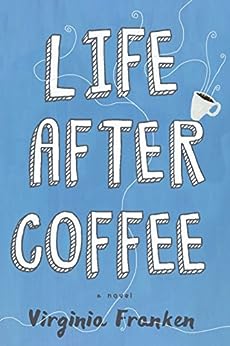 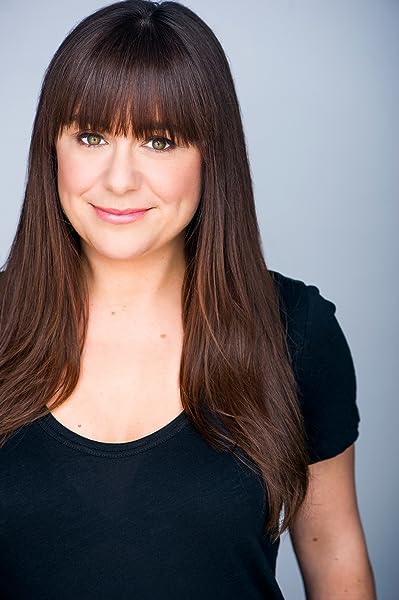 Virginia Franken was born and raised in the United Kingdom. She graduated from the University of Roehampton, in London, with a degree in dance and worked on cruise liners as a professional dancer before changing tracks to pursue a career in publishing. Franken currently lives in suburban Los Angeles with two kids, a dog, an overweight goldfish, and one bearded dude, in a house that's just a little too small to fit everyone in comfortably. She gets most of her writing done when she should be sleeping. This is her first novel. --This text refers to the paperback edition.

3.8 out of 5 stars
3.8 out of 5
119 global ratings
How are ratings calculated?
To calculate the overall star rating and percentage breakdown by star, we don’t use a simple average. Instead, our system considers things like how recent a review is and if the reviewer bought the item on Amazon. It also analyses reviews to verify trustworthiness.

NicShef❤️Reading
5.0 out of 5 stars Funny, real and charming
Reviewed in Australia on 4 November 2016
Verified Purchase
We women have it hard, whether working mum or stay at home mum or an in betweener as our industrious leading lady Amy now is! Amy O'Hara, coffee buyer, has just lost her job. It wouldn't be se bad if she wasn't the only income earner of her family. Her husband, usually the one to take care of the kids and the house while Amy is away trekking through the Ethiopian cloud forest, has now holed himself up in the garage to write the next bestselling screenplay. Meanwhile her days have now become consumed with dirty dishes, laundry, and children who seem bent on making her pay for all those times she was away. On the verge of facing financial devastation, her husband asks her to contact her movie mogul ex-boyfriend to see if he'd be interested in his screenplay - turns out he's interested in more than the screenplay.
I really enjoyed this book. There were moments where I laughed, cringed, and got teary eyed right along with Amy. You feel for the honest and industrious Amy and her impossibly conflicting lifestyle, torn between the demands of her emotional and demanding young family and her high flying career.
She is outwardly a strong character but we quickly begin to be aware of the contradictions, dilemmas and heartaches her lifestyle has created.
So fresh, wickedly funny and cleverly written, all the characters, both within and beyond the immediate family are beautifully observed in their everyday life and in the many bitter-sweet scenarios.
A thoroughly enjoyable and satisfying read – a must-read for every Mum with the impossible task of balancing family and career.

Snapdragon
TOP 10 REVIEWER
4.0 out of 5 stars Good
Reviewed in Australia on 19 February 2018
Verified Purchase
This is Virginia Franken’s debut novel, and it’s pretty good. It’s in the Liane Moriarty mould ... the travails of an ordinary suburban mum. Except that Amy isn’t so ordinary. She travels the world buying coffee beans and she really knows her stuff. House husband Peter parents 5yo Billy and 3yo Violet while also trying to write a killer movie script. He has a well-deserved reputation in the industry for being difficult, so selling the new one is going to be hard.

Then Amy loses her job. Suddenly she’s thrown into full-time parenthood and it doesn’t go well. Peter retreats into script writing as Amy gets more and more desperate to earn cash to keep them afloat. The tone here is mostly breezily flip as she lurches from one disaster to another, bearing the brunt of snide comments from non-working mums. She nearly comes undone when an old boyfriend, now a successful producer, tries it on.

Just as it seems as though the kids and Amy are getting it together in the child-mother department, while also about to lose the house, Amy is thrown a lifeline: another trip to Ethiopia, and her grower with the probably rust-resistant beans. Grimly, she sets herself towards the wrenching departure. It’s as bad as ever, only worse, because well, no spoilers. No spoilers about the ending, either, but it’s a good one, which solves all their problems: Peter’s lack of script-selling success, Billy’s heightened emotional sensitivity, Amy’s need to combine work and mothering, and Violet does better too. The tone by now is less flip and more straightforward, and the better for it. It feels as though we’re getting a straighter handle on Amy as their lives straighten out.

One thing: we’re told that Billy’s lactose intolerance kicks in when the unknowing Amy gives him cheddar cheese. It probably didn’t, because hard cheeses don’t contain much lactose. In fact, taking a kid off dairy except for cheddar is one way to find out if it’s milk sugar or milk protein that’s causing the diarrhoea.
Read more
Helpful
Comment Report abuse

realmum
5.0 out of 5 stars Fantastic
Reviewed in Australia on 2 January 2017
Verified Purchase
I loved this story it's a great read about the old question of being a mum vs being a working mum with a great story as well. I thoroughly enjoyed this book and found myself caught up in the question of can you have it all? Can Amy find a balance and can she find her way? Then an old flame comes along just to make her life even more complicated. Will Amy run away from her old life? Or will she stay and try to figure her life out before she loses everything?
Read more
Helpful
Comment Report abuse

Joan Thompson
5.0 out of 5 stars A great book
Reviewed in Australia on 5 November 2016
Verified Purchase
I loved this book, having gone back to work when my children started school. The chaos she encountered resonated with me and the time her 5year old son tells her he loves her brought tears to my eyes. Well worth reading.
Read more
Helpful
Comment Report abuse

Linda Walker
4.0 out of 5 stars Modern families
Reviewed in Australia on 25 November 2016
Verified Purchase
A very entertaining book full of humour as well as some serious moments. This story must ring true to the generation of 30- 45 year old women who have kept their careers going after motherhood. Life isn't always easy.
Read more
Helpful
Comment Report abuse

lions1310
4.0 out of 5 stars A great comfort read
Reviewed in Australia on 16 January 2017
Verified Purchase
This is a great comfort read, one of those books you read when you are tired and worn out by life and you need a book to tuck you in and give you a hug. The characters are relatable and funny and flawed and human. And the story line is inspiring and easy to follow. I really enjoyed this book, the first whole book I have read since having my first baby!
Read more
Helpful
Comment Report abuse

Amazon Customer
5.0 out of 5 stars Laugh out loud and smile while you read
Reviewed in Australia on 6 January 2017
Verified Purchase
From the cover this book looks ordinary but by the second page your laughing and by the third your hooked. Honest, witty and real. I love the story of true family life, jobs no jobs a husband that doesn't earn income the responsibility of funding their lives, but still you find warmth and hope, highly re7
Read more
One person found this helpful
Helpful
Comment Report abuse
See all reviews

Jon Scott
4.0 out of 5 stars Mostly good
Reviewed in the United Kingdom on 27 December 2016
Verified Purchase
Here was a novel that had the potential to turn a very credible, real- life situation into an interesting and very funny read. And it lived up to that promise for me.............mostly! After a very good beginning that certainly grabbed my attention, things started to become rather irritatingly exaggerated. Credibility was being sacrificed for a constant and rather overdone humour. My initial empathy with Amy, for example, gradually turned to annoyance as her maternal and social incompetences multiplied and I found that I actually started to dislike her. Peter's sudden transformation from perfect parent and family man to someone who took a complete opt-out left me unconvinced, as did the rather blatant stereotyping applied to the other characters that Amy was coming into contact with. As I persevered through this, however, the writing picked up again and I enjoyed immensely the remainder of the book. The ending, that I thought might come as a very predictable one, packed something of a surprise. Overall, this is an easy and entertaining book. It is just a pity about the temporary "blip" described above.
Read more
Report abuse

ejm
3.0 out of 5 stars Light entertaining reading
Reviewed in the United Kingdom on 8 January 2017
Verified Purchase
I came to this after ploughing through a WW1 spy novel, so there was a very real element of relief to read its conversational relaxed prose ; the story flows along and is interesting enough to sustain. However I did become somewhat frustrated by inconsistencies in the central character, Amy. Shortly after realising that she adores the family from which work has separated her, she jeopardises it all for little more than curiosity. Similarly we are asked to believe that although able to singlehandedly stitch a wound to her son's head or rescue African children from a burning building, she cannot successfully supply breakfast to her children in LA. Hmmmm.
This gave me a couple of day's unchallenging post-Christmas reading, and I can imagine it being a suitable poolside book too, but you will need to suspend your disbelief to enjoy it.
Read more
Report abuse

Marian
3.0 out of 5 stars Coffe?
Reviewed in the United Kingdom on 13 May 2017
Verified Purchase
A good read about the ups and downs of being a working mother
I like the fact that it points out that we are not all perfect!
Read more
Report abuse

Vidhi
5.0 out of 5 stars Brilliant
Reviewed in the United Kingdom on 22 November 2016
Verified Purchase
A super witty and surprisingly well written book. Perfect for light hearted reading.
Had me smiling throughout.
Look forward to her other books.
Loved it.
Read more
Report abuse

Miss Kerry West
4.0 out of 5 stars Four Stars
Reviewed in the United Kingdom on 14 October 2016
Verified Purchase
A fantastic and realistic insight into juggling life! Thoroughly enjoyable.
Read more
Report abuse
See all reviews
Get FREE delivery with Amazon Prime
Prime members enjoy FREE Delivery and exclusive access to movies, TV shows, music, Kindle e-books, Twitch Prime, and more.
> Get Started
Back to top
Get to Know Us
Make Money with Us
Let Us Help You
And don't forget:
© 1996-2020, Amazon.com, Inc. or its affiliates