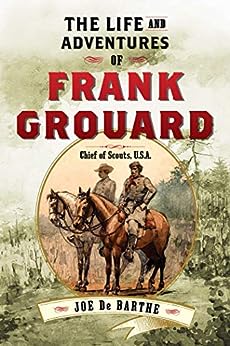 The Life and Adventures of Frank Grouard: Chief of Scouts, U.S.A. Kindle Edition

Joe De Barthe worked as a newspaperman for his entire life. After an apprenticeship in Wilkes-Barre, Pennsylvania, he moved to Chicago and then to Boston, working on newspapers in both places. He eventually ended up running a number of newspapers in Wyoming. He died in Marion, OH in 1928. --This text refers to an alternate kindle_edition edition.

4.7 out of 5 stars
4.7 out of 5
41 global ratings
How are ratings calculated?
To calculate the overall star rating and percentage breakdown by star, we don’t use a simple average. Instead, our system considers things like how recent a review is and if the reviewer bought the item on Amazon. It also analyses reviews to verify trustworthiness.

Stephen p
5.0 out of 5 stars Very descriptive.
Reviewed in the United Kingdom on 14 April 2021
Verified Purchase
Written at the time, so you've got to overlook the racism involved. Very descriptive of that half century of Indian wars and how it was on the trail, tracking and fighting the Lakota, who were, after all, just fighting for their lands and way of life when all's said and done.
Read more
Report abuse

David James Scott
5.0 out of 5 stars Real life of an Indian scout
Reviewed in the United Kingdom on 4 October 2019
Verified Purchase
Nobody will be disappointed reading this book
Read more
One person found this helpful
Report abuse

Kindle Customer
5.0 out of 5 stars One he'll off a man
Reviewed in the United Kingdom on 13 March 2020
Verified Purchase
I one's had they idea that they
Sas where hard men but have in read this book what a guy what a life
Read more
Report abuse

KIRK
3.0 out of 5 stars Frank is my GG Step Brother
Reviewed in the United States on 14 June 2020
Verified Purchase
I read this book wanting to know more about a member of my family. I learned far more than I thought I would . I had to put with two very annoying editor problems that included a lack of complete punctuation and many typos ! My guess is that to create this ebook they simply scanned the real book with ‘smart’ tech and never edited the mistakes!
This book is a collection of ‘sketches’, that create a historical book, however when the author has Frank telling his stories , the writing is a joy to read and easy to understand but when Mr De Barthe puts on his reporter hat , the writing is hard to read and follow. I would recommend this book to any family member. In fact I bought a hard copy to loan out.
Read more
Report abuse

Kindle Customer
5.0 out of 5 stars Outstanding information about the Indian wars .
Reviewed in the United States on 18 July 2019
Verified Purchase
Great history lesson about Indian wars . A lot of information with the necessary documentation to show complete the stories . Well-written in a chronological order . The only bad part a lot of typos in the book , don't know if this is from the original era or something new . All-around great book if you like history in the 1800s .
Read more
One person found this helpful
Report abuse
See all reviews
Back to top
Get to Know Us
Make Money with Us
Let Us Help You
And don't forget:
© 1996-2021, Amazon.com, Inc. or its affiliates