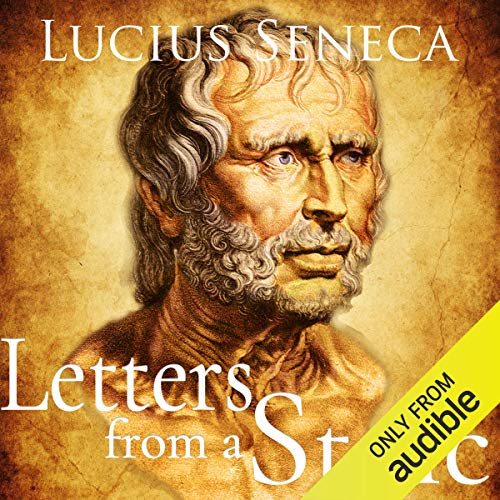 Letters from a Stoic

4.6 out of 5 stars
4.6 out of 5
2,264 global ratings
How are ratings calculated?
To calculate the overall star rating and percentage breakdown by star, we don’t use a simple average. Instead, our system considers things like how recent a review is and if the reviewer bought the item on Amazon. It also analyses reviews to verify trustworthiness.

Sam M. Phillips
5.0 out of 5 stars A great mind reaches out across the millenia
Reviewed in Australia on 4 August 2020
Verified Purchase
Such a great book and philosophy, with such a personable and easy to read writing style. Let Seneca become a close friend as he speaks directly to you, teaching you about life and how to cope with its trials. The book looks good, well printed, not too long or short, and will leave you thinking, as well as comfort you in hard times. A must read.
Read more
2 people found this helpful
Helpful
Report abuse

literati
5.0 out of 5 stars A treasure trove of wisdom
Reviewed in Australia on 13 January 2020
Verified Purchase
So much value in only ~200 pages! Where to start? There is (1) timeless advice, (2) spiritual exercises, (3) delightful insight into Roman life. Extremely interesting and useful in my daily life, something I love to refer to when experiencing difficult moments or temptations.
Read more
Helpful
Report abuse

Amazon Customer
4.0 out of 5 stars A good approach
Reviewed in Australia on 9 June 2020
Verified Purchase
A comprehensive coverage for a person still filtering through the classical era.
Read more
Helpful
Report abuse

William Zunder
5.0 out of 5 stars Seneca Our Contemporary
Reviewed in the United Kingdom on 26 April 2018
Verified Purchase
It’s not often you read a classical author and feel you are reading one of your contemporaries. But this is the case with Seneca in these letters which he wrote to a friend in the early 60s AD. They are affable, witty, and supremely accessible. Perhaps the most striking thing about them is their materialist discourse at a time when religious explanations were widespread. For Seneca the universe consisted of matter informed by creative reason, the same reason that informs the human personality. Hence the Stoic assertion that god is within us, and that a virtuous life lived according to reason could achieve tranquillity, the state of being of the gods, if there are any. Ethics was accordingly the centre of philosophy for the Stoics, with their basic concepts of moderation, acceptance, and endurance. And the letters are filled with practical advice on how to live a virtuous and happy life, much of which seems eminently sensible today. There’s his advice, for example, on how to cope with the Saturnalia, the Roman festival later transformed into Christmas: don’t overindulge, but don’t opt out either. Stoicism, however, was the ideology of the ruling class, and it has the limitations of the class it derives from: self-direction, social and political conservatism, indifference to the plight of others. Its historical significance lies in becoming the personal ethic of Christianity, supplemented by the New Testament ethic of neighbourly love, after the adoption of Christianity by the Roman empire in the fourth century. An instructive and enlightening collection rendered in a sympathetic and unobtrusive translation.
Read more
53 people found this helpful
Report abuse

Renan Padua
5.0 out of 5 stars Profound knowledge
Reviewed in the United Kingdom on 5 June 2020
Verified Purchase
This is my first book review. I don't know much about how to classify a book, but I am impressed about the deep applicable knowledge shared in this book. Remarkably profound and sometimes touching. I love it. It should not be read too fast, instead, digested page by page.
It was the first philosophy book I read in a second language. I found it pleasant since Seneca often repeats the same idea more than once in order to improve comprehension. Very proficient people could maybe find it annoying, nevertheless, it was perfect for me.
Read more

5.0 out of 5 stars Profound knowledge
Reviewed in the United Kingdom on 5 June 2020
This is my first book review. I don't know much about how to classify a book, but I am impressed about the deep applicable knowledge shared in this book. Remarkably profound and sometimes touching. I love it. It should not be read too fast, instead, digested page by page.
It was the first philosophy book I read in a second language. I found it pleasant since Seneca often repeats the same idea more than once in order to improve comprehension. Very proficient people could maybe find it annoying, nevertheless, it was perfect for me.

M De Sarkar
5.0 out of 5 stars A beginner's source book of Stoicism.
Reviewed in India on 12 June 2018
Verified Purchase
Are you someone who wants to utilize every spare moment for the betterment of his/her's intellect, mind and overall personality? Are you someone who believes that spending quality time with oneself in calm, secluded corners is a better option than being a part of the rabble-rousing crowd? Are you someone who is serious about the concept of personal virtue (and its evolution in a rapidly changing social order)? Above all, are you someone in whom the Upanishads strike a distinct chord? Then you positively owe it to yourself to get acquainted with Seneca. His will be the voice of a wiser older brother calmly guiding you through life's turbulent moments. More importantly, following his (and the Upanishads') advices will ensure those turbulent moments won't hit you as often as they would a lesser informed, unevolved individual. Finally, reading and meditating on ( 'sravana, manana and nididhyasana') the above-mentioned texts will to an extent ensure acceptance of the issue of Death with a logical, and relatively unruffled mind (provided you practice death mentally like the Stoics say, of course :-)).

Between the Stoics (Seneca, Marcus Aurelius and Epictetus), it's Seneca I find the most approachable and practical. Marcus Aurelius often veers to the overtly preachy while Epictetus sounds too simplistic at times. My two cents, reading Seneca with the Upanishads and Sankaracharya's 'Vivekachudamani' will round up one's approach to life. Although the Dover Editions version of 'Letters From a Stoic' is probably the one you should be getting.
Read more
79 people found this helpful
Report abuse

Arupratan
2.0 out of 5 stars Am I Missing Something?
Reviewed in India on 21 March 2020
Verified Purchase
32 number of pages are missing! Page#65 to 96. Penguin is THE leading publishing house in the world. This edition is printed in India (at Thomson Press, New Delhi, no less. A renowned printing establishment themselves). No wonder. This is not the first time I've encountered some mishaps in a Penguin book which is manufactured in India. I'm not being sceptical, but surely something strange is happening with the book production industry in our country, even if the book is from a famed publisher such as Penguin. You tell me guys. Aren't the Penguin India (a part of Penguin Group worldwide) books oddly underwhelming (qualitywise) than the same title but printed elsewhere? What am I missing here?

(Though this is perhaps not the ideal expression of emotion from someone who is trying to read a book written by a stoic philosopher, right? But remember, i couldn't able to finish the book.)
Read more
33 people found this helpful
Report abuse

M. Dowden
5.0 out of 5 stars A Selection of Letters
Reviewed in the United Kingdom on 26 February 2021
Verified Purchase
Here we are given a selection of letters by Seneca the Younger, or more commonly called these days just Seneca. Not all the letters are included here as some of them are repetitions of subjects already mentioned, as well as other reasons, such as the corruption of the original or debate whether some were written by the great man himself.

It is worth reading the introduction to this book, especially if you are new to this author and want to know more about him. Here we are given the basics of his life as known and other pertinent facts, reminding us that although he had high ideals, like the rest of us he was also a hypocrite and therefore did not always meet his expectations. Although termed letters these are really what we would call essays and thus have been influential on many levels, not only just philosophy and influenced Montaigne to write essays. We know that these were written with the idea of having them published as they are well polished and take in philosophy and the human condition.

We can see that Seneca was arguably ahead of most people of his time, after all with regards to slaves, a common practice of the period and beyond, so our author points out that although they may be held for a variety of reasons, that does not stop them from being human, and should be treated just as respectfully as free people. This at the same time also takes in class structures and that even someone with the most menial of jobs should be treated equally with regards to politeness and so on. He also deplores the killing for killing’s sake of the arena. After all, when he comes on to writing what philosophy is and is not, so we are reminded that of the improvements and inventions that have been made in his period they have been done by others, with when philosophers are involved, it just being incidental that they are that as well.

Taking in stoicism and easily accessible with regards to reading and understanding so we are driven here to want to live a happy and complete life. We are reminded to think logically and so on, as common sense is a virtue as such, and that we should all respect and treat others accordingly. Of course, a pagan as such by the Christian religion, he was one of those people who were respected and incorporated into the new religious system, as his views on a full life does not actually go against religious beliefs and has been influential on what makes a good life.

Making for an interesting read, and at times with an injection of humour, so there are the usual things that you would expect from a Penguin edition, such as footnotes and so on, and also an appendix, which gives us Tacitus’ account of his death.
Read more
5 people found this helpful
Report abuse
See all reviews
Back to top
Get to Know Us
Make Money with Us
Let Us Help You
And don't forget:
© 1996-2021, Amazon.com, Inc. or its affiliates