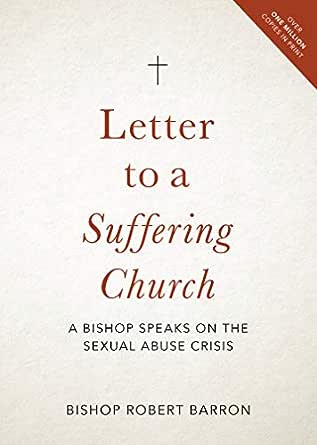 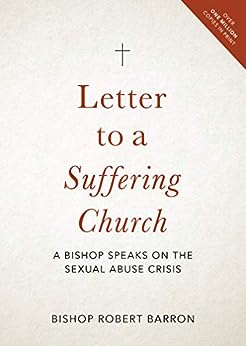 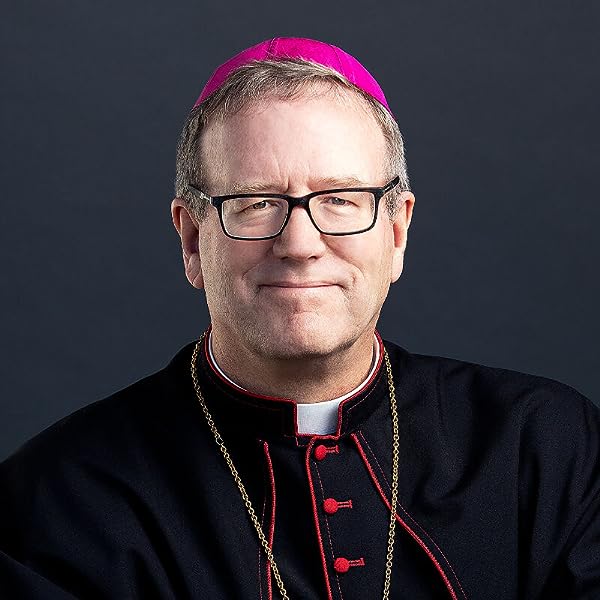 Letter to a Suffering Church: A Bishop Speaks on the Sexual Abuse Crisis Kindle Edition

Barron is not inviting Catholics to turn a blind eye, or to simply carry on with the status quo. He recognizes the anger, knows it s justified, and nevertheless wants to keep people from abandoning the Eucharist, and all that the Church, and only the Church, can offer. --Aleteia

Barron urges Catholics not to quit over scandals, but stay and fight. --Crux

Bishop Robert Barron pulls no punches in 'Letter to a Suffering Church,' making a direct and powerful appeal to every Catholic tempted to flee the Church after a hellish year of unremitting scandal. --National Catholic Register --This text refers to an out of print or unavailable edition of this title.

Bishop Robert Barron is an acclaimed author, speaker, and theologian. He is also the founder of the global media ministry Word on Fire, which reaches millions of people by utilizing the tools of new media to draw people into or back to the Catholic Faith. Francis Cardinal George has described him as one of the Church's best messengers. Bishop Barron is the creator and host of CATHOLICISM, a groundbreaking, award-winning documentary series about the Catholic Faith. The series has aired on hundreds of PBS stations across the world and has been used by parishes, universities, and schools as an essential resource. Since then, Bishop Barron and Word on Fire also released the follow-up documentary CATHOLICISM: The New Evangelization and are currently wrapping up CATHOLICISM: The Pivotal Players, a beautiful new film series on the mystics, scholars, artists, and saints who shaped the Church and changed the world. The first volume of the series debuted in September 2016 and was syndicated for national television and nominated for an Emmy award. The second volume is currently in production. Bishop Barron has created eight other films and study programs including: The Mass David the King The Mystery of God Priest, Prophet, King Conversion Eucharist Seven Deadly Sins, Seven Lively Virtues Untold Blessing Bishop Barron's website, WordOnFire.org, reaches millions of people each year. The site hosts daily blog posts, weekly articles and video commentaries, and an extensive audio archive of over 500 homilies. Bishop Barron's homilies are heard by tens of thousands of listeners each week. His regular YouTube videos have been viewed over 30 million times, and over 350,000 people receive his daily email reflections. Episodes of his podcast/radio show, The Word on Fire Show, have been downloaded over four million times. Bishop Barron is one of the most-followed Catholics in the world on social media. His work has garnered: 1.5 million+ Facebook fans 200,000+ YouTube subscribers 100,000+ Twitter followers Bishop Barron has produced over 400 online video commentaries. His weekly, high-quality productions include brief and lively theological reviews of contemporary culture, including movies, books, music, current events, and more. EWTN (The Eternal Word Television Network) and CatholicTV broadcast Bishop Barron's videos and documentaries to a worldwide audience of over 150 million people. His weekly homilies and podcasts air on multiple radio stations to millions of listeners. Bishop Barron has been invited to speak about religion at the headquarters of both Facebook and Google. He has keynoted many conferences and events all over the world, including the 2016 World Youth Day in Kraków and the 2015 World Meeting of Families in Philadelphia, which marked Pope Francis' historic visit to the United States. Bishop Barron works with NBC News in New York as an on-air contributor and analyst. He is also a frequent commentator for the Chicago Tribune, FOX News, CNN, EWTN, Our Sunday Visitor, the Catholic Herald in London, and Catholic News Agency. He has published numerous essays and articles on theology and the spiritual life, which appear frequently online and in numerous journals. He is a #1 Amazon bestselling author and has published sixteen books, including: Arguing Religion: A Bishop Speaks at Facebook and Google (Word on Fire, 2018) To Light a Fire on the Earth: Proclaiming the Gospel in a Secular Age (Image, 2017) Vibrant Paradoxes: The Both/And of Catholicism (Word on Fire, 2016) Exploring Catholic Theology: Essays on God, Liturgy, and Evangelization (Baker Academic, 2015) Seeds of the Word: Finding God in the Culture (Word on Fire, 2015) 2 Samuel (Brazos, 2015) --This text refers to an out of print or unavailable edition of this title.

4.7 out of 5 stars
4.7 out of 5
465 global ratings
How are ratings calculated?
To calculate the overall star rating and percentage breakdown by star, we don’t use a simple average. Instead, our system considers things like how recent a review is and if the reviewer bought the item on Amazon. It also analyses reviews to verify trustworthiness.

RMH
5.0 out of 5 stars A heart-felt cry to the church for renewal
Reviewed in Australia on 29 August 2019
Verified Purchase
Bishop Robert offers great encouragement to return our gaze to the risen Lord and all that the Catholic Church as a community of Christ's faithful ones has to offer. He brings his breadth of historical, philosophical and theological knowledge to bear on the reality of the human limitations of the church, but reminding us that we are not only a human institution.
Read more
Helpful
Report abuse

Lorraine B
5.0 out of 5 stars Such a needed conversation
Reviewed in Australia on 22 July 2019
What a raw, honest and real response to this awful time for the church. Inside and outside the church people are trying to get their heads around this topic and this really gives us all a place to start the conversation. How do you condemn the actions by a few terrible people and continue to love and support the good people of the church and care for the hurt and protect the vulnerable moving forward. Bishop Barrons book really helps us start talking and healing and looking to a better future.
Read more
Helpful
Report abuse
See all reviews

Kindle Customer
5.0 out of 5 stars Biblical and balanced.
Reviewed in the United Kingdom on 18 November 2019
Verified Purchase
This is a thoughtful, biblically inspired commentary on a very controversial and sensitive issue. It is very balanced in its argument for Catholics to remain in the church and fight to restore faith and trust in our priests. The atrocities that a few priests have committed against innocent vulnerable individuals is openly condemned. The book makes suggestions as to how both lay members and clerical authorities must fight together to change the past lax attitudes and denial of reality which perpetuated priests abusing their position of trust and power and resulted in gross sexual misconduct. Protecting children is everyone's responsibility and we all have to work together to fight Satan trying yet again to destroy the Church and prevent the message of our Lord Jesus Christ reaching those so desperately in need of His Love and salvation.
Read more
One person found this helpful
Report abuse

Fiona O'Brien
5.0 out of 5 stars A Must Read!
Reviewed in the United Kingdom on 29 July 2019
Verified Purchase
I have just read this excellent and long overdue book addressing the sex abuse scandals in the Catholic Church. It is insightful, highly informative and most of all resonating with common sense. More importantly it treats the reader with intelligence and sympathy. Best of all, it recommends and directs the way forward for many betrayed, angry and bewildered Catholics.
Read more

5.0 out of 5 stars A Must Read!
Reviewed in the United Kingdom on 29 July 2019
I have just read this excellent and long overdue book addressing the sex abuse scandals in the Catholic Church. It is insightful, highly informative and most of all resonating with common sense. More importantly it treats the reader with intelligence and sympathy. Best of all, it recommends and directs the way forward for many betrayed, angry and bewildered Catholics.
Images in this review

Amazon Customer
5.0 out of 5 stars Words to help restore and encourage
Reviewed in the United Kingdom on 4 August 2020
Verified Purchase
Bishop Barron sets out to, not explain why or how the scourge of sexual abuse occurs in our Church, but to instill a sense of hope, encouragement and faith in her. His calm reasoned approach attempts to reassure catholics that our faith in Jesus Christ and his Church is not for nigh. Bishop Barron writes in a factual calm manner, 100% empathising with victims and condemning perpetrators of sexual abuse while also acknowledging the hurts of the Catholic . He gives us a sense of hope and renewal.
Read more
Report abuse

CW
5.0 out of 5 stars A powerful explanation of why we need to raise up the Catholic Church in the face of the abuse scandals
Reviewed in the United Kingdom on 31 January 2020
Verified Purchase
Bishop Robert Barron provides a historical context to show that the Catholic Church has faced terrible abuses and risen back up and that the bible is full of sinful men and women who have turned away from Gods plan and suffer the consequences. He excuses nothing and supports those who have been betrayed by those in positions of trust but also explains how the richness of the treasures on offer make it worth fighting for our church despite the suffering of those abused
Read more
One person found this helpful
Report abuse

Evelyn
5.0 out of 5 stars A must read for everyone, not just for Catholics!
Reviewed in the United Kingdom on 11 August 2019
Verified Purchase
It helps put things in perspective and to understand the situation better without jumping to conclusion based on certain prejudice, stereotyping and to a certain extent ignorance.
Read more
2 people found this helpful
Report abuse
See all reviews
Back to top
Get to Know Us
Make Money with Us
Let Us Help You
And don't forget:
© 1996-2021, Amazon.com, Inc. or its affiliates