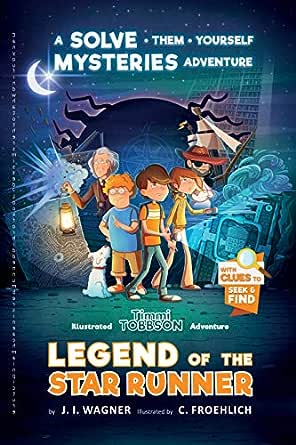 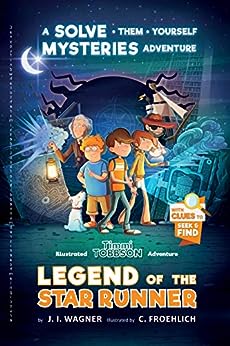 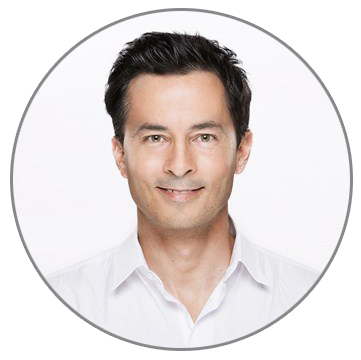 Foreword Reviews Magazine (scored 5 out of 5)
A spirited trio of kid sleuths undertake a classic treasure hunt in J. I. Wagner's Legend of the Star Runner. Taking its inspiration from video games and cloak-and-dagger mysteries, this story for middle-grade readers is a visual feast.<br ><br >
Lilli's grandfather is facing eviction. With the prospect of a pirate's treasure guiding them, she and her best friends, Marvin andTimmi, set out to find the loot to rescue him from his debts. A large-hearted, naïve, and wildly improbable plot delights as the fearless team - led by a treasure hunter - lands in a series of underground worlds.<br ><br >
Several twists and turns hinge on pure luck, timing, and uncanny perceptions. A reliance on video-game staples, including hidden passageways, trapdoors, puzzles, maps, and multiple-choice paths, sometimes threatens to turn the book into a high-concept maze. Still, what the story misses in the depth of its background, the illustrations make up for; they are smart compositions using chromatic palettes and feature clues. From a cluttered kitchen to the check-in desk at the Savoy to a wall of keys at an archive, scenes set a distinct mood for the story.<br ><br >
The tone is wisely calibrated; it's neither overly terrifying nor overly lighthearted. The perils the group encounter pose enough danger to build suspense yet leave room for escape. There's seldom doubt that the kids will prevail, considering their Holmesian knack for observation; the book's pleasure rests in their citywide ranging that peels back history to reveal the secrets of a legendary pirate embedded in their midst.<br ><br >
A list of fun facts lists the book's film influences, which include Pirates of the Caribbean, and a section of hints offers insights written in reverse. With the exuberance of a caper, determined protagonists, and a message steeped in family legacy, this first in a planned series is a splendid homage to adventure.
Reviewed by Karen Rigby

May/June 2018
Disclosure: This article is not an endorsement, but a review. The author of this book provided free copies of the book to have their book reviewed by a professional reviewer. No fee was paid by the author for this review. Foreword Reviews only recommends books that we love. Foreword Magazine, Inc. is disclosing this in accordance with the Federal Trade Commission's 16 CFR, Part 255. --Foreword Magazine, Inc.

"With the exuberance of a caper, determined protagonists, and a message steeped in family legacy, this is a splendid homage to adventure." - FOREWORD MAGAZINE - 5 out of 5

Unravel 'solve-them-yourself picture mysteries' and uncover the Legend of the Star Runner!

Following the clues concealed within a centuries-old family legacy, Timmi Tobbson and his friends hope to save a dear friend. But only twenty-four hours remain to unravel the legend of a long-lost pirate ship, buried somewhere deep beneath the city streets. Unbeknownst to them, their search awakens a mystical dark power, sworn to protect what is hidden on board the once famous Star Runner.

The adventure is divided into 31 concise chapters, each of which ends with a puzzle to be solved by finding and interpreting visual clues concealed within a beautiful color illustration. Suited for explorers and sleuths young and old. Children under 8 years may need assistance in solving some of the puzzles. Grade level: 3rd and up.

Legend of the Star Runner gives readers the best of both worlds, merging the visual appeal of a graphic novel with text-based storytelling's power to spark imagination.

The illustrations of most Timmi Tobbson characters were inspired by actors and/or their fictional characters from well-known movies.


Psst: This book contains a puzzle which is unrelated to the story and involves all thirty-one main illustrations.

Especially for fans of:

2squaredmumma
5.0 out of 5 stars Gripping
10 April 2019
Format: Kindle Edition
My kids loved this book and the solve the clues pictures at each chapters ends.
The story was well crafted and kept a driving pace from beginning to end. Twists, turns and treausre.

MJ
2.0 out of 5 stars Use of the word "crap" and Jesus' name taken in vain
10 August 2019 - Published on Amazon.com
Verified Purchase
Clever way to write a book, my 7 and 9yo kids loved trying to solve all the puzzles. Would have given 4 stars if the author had avoided using Jesus' name in vain and the exclamation "crap!" and "double crap". Why did the author need to spoil an otherwise great book with a couple of instances of poor language? These could have easily been avoided. Won't buy any sequels to this unless I am certain they are clean.
Read more
246 people found this helpful

Howard B. Cichoski
4.0 out of 5 stars Engaging story, fun puzzles, a few caveats
21 August 2019 - Published on Amazon.com
Verified Purchase
This book was purchased by my parents for me to read to my son as a 7th birthday present. The story was good, although there were some unanswered questions left for a potential sequel. The picture puzzles were fun for my son, and he solved most of them with ease (there were a few that were surprisingly difficult, though). The only negatives I would have are as follows:
1. Some of the illustrations are so dark, it was hard to see possible clues.
2. There’s an extremely random moment when an adult character shouts “Jesus!” in anger. There isn’t any other adult language in the book (at least not that I can remember), and this totally comes out of left field. Regardless of anyone’s religious beliefs, this is a REALLY strong word for a children’s book, and admittedly, it had me on edge for the rest of the story, worried that there might be another instance of language that I might not catch in time and inadvertently say to my 7 year old. Thankfully, there wasn’t, but geez. Tip: next time, don’t put random language in a kid’s book.

Now I also bought this book for my nephew, who is in 6th grade and has dyslexia / dysgraphia. This is the first book he begs to read another chapter of.

The puzzles are unlike those of any other book. Your kid becomes a detective and needs to combine the information given in the story with what can be inferred from the chapter’s illustration. In the back of the book you can find hints, offering some help if you get stuck. To sum it up:

- Engaging story about helping Lilli’s grandpa (a treasure hunt NOT motivated by greed)
- Very different main characters to identify with (e.g. ranging from very sensitive to very outgoing)
- Short chapters (three pages) making it accessible to kids lacking reading experience
- A full page color illustration at the end of each chapter
- A puzzle to solve at the end of each chapter (e.g. How could we tell a painting had been stolen?)
- Hints at the end of the book (can be read by looking at the writing in a mirror)
- Bonus: Hidden numbers in each illustration work as a passcode to enter a secret area on the website of the book

BinaryOrc
5.0 out of 5 stars A Really Good Adventure Book
1 June 2018 - Published on Amazon.com
Verified Purchase
I love this book. My kids love this book. It is an adventure story that requires using some creative puzzle solving to figure out the puzzles presented to the reader. Excellent variety of puzzles that require a bit of lateral thinking. The characters are great, and overall the story is just wonderful. I truly hope there will be more like this to come!
Read more
39 people found this helpful

Sean B. Schoonmaker
5.0 out of 5 stars Kept My 6-YO Engaged and Inquisitive
10 October 2018 - Published on Amazon.com
Verified Purchase
This book follows the escapades and investigations of Timmi, Marvin, & Lilli as they search for the Star Runner and its hidden treasures. The format is much like many children's chapter books - but each chapter of story is followed by a full-page illustration that is the puzzle-solving part of the book. The clues in the text cue what you should be looking for in the illustration to solve the puzzle for that chapter.
Honestly, I thought this might be a bit much for my 6-YO, but he was very engaged and very good at picking out hidden clues in the illustrations. Only on some of the harder ones did I need to provide some additional clues for him. And only on the hardest puzzles did I need to refer to the clues at the end of the book (designed to be read in a mirror).
We both ended up having great fun with this, and can't wait till the next installment. If I have one reservation, it's that the re-reading potential is lower due to having solved the puzzles already.


Read more
21 people found this helpful
Go to Amazon.com to see all 136 reviews 4.8 out of 5 stars
Get FREE delivery with Amazon Prime
Prime members enjoy FREE Delivery and exclusive access to movies, TV shows, music, Kindle e-books, Twitch Prime, and more.
> Get Started
Back to top
Get to Know Us
Make Money with Us
Let Us Help You
And don't forget:
© 1996-2020, Amazon.com, Inc. or its affiliates