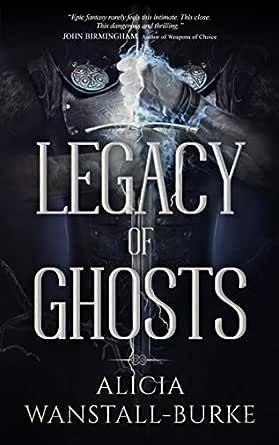 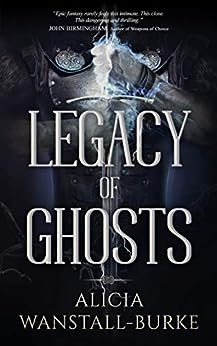 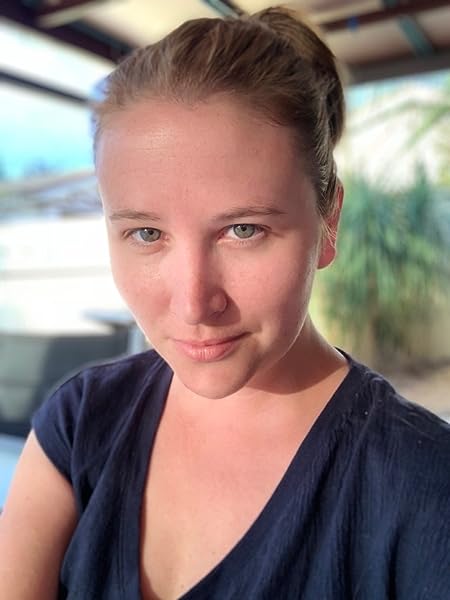 “Epic fantasy rarely feels this intimate. This close. This dangerous and thrilling.”

- TO Munro, The Fantasy Hive

“Epic fantasy rarely feels this intimate. This close. This dangerous and thrilling.” - John Birmingham, best selling author of He Died with a Felafel in His Hand and Weapons of Choice.

"Complex protagonists, a stunningly realised world, an action-packed story and an extraordinary twist will have readers eager for more.” - Juliet Marillier, author of the Blackthorn & Grim series.

“Wanstall-Burke demonstrates her shrewd talent for plotting, fusing together threads of physical and emotional confrontations with the fine touch of a knife’s edge." - Adam Weller, Fantasy Book Review ”

Four years have passed since Lidan’s world was ripped apart, and time is running out to change her father’s mind about the succession before the bargain with her mother expires. Torn between what she wants and what she knows is right, she is faced with an impossible choice; will her brother live, or will he die?

Within the walls of the Hidden Keep, Ranoth holds his secrets close as he tries to harness his wild magic. But when life in the Keep descends into chaos, he is cast once more into the outside world, forced upon a southward path toward unknown lands and untold danger.

With Ran set on seeking justice and revenge, and Lidan fighting to find her feet and follow her heart, journeys will converge, and the ghosts of a past thought long dead will rise.
See all Product description

Aunty Lou
5.0 out of 5 stars Superb!
7 January 2020
Format: Kindle EditionVerified Purchase
This book is an extremely worthy second book in a magnificently wrought saga that has had me gripped from the get go. Some terrific character building cleverly moves the story along at a terrific pace. I'm just sorry I have to wait for the next one! If you like quality world building with excellent, if gory battle scenes, as well as adroitly managed coming of age stories expertly tied to feudal politics laced with magical intrigue - Gosh yes this book does have it all! And I am normally into space opera style scifi not fantasy! Extremely glad i took the chance.
Read more
Helpful
Comment Report abuse

Elana Mitchell
5.0 out of 5 stars Amazing
15 December 2019
Format: Kindle EditionVerified Purchase
An incredible sequel to Blood of Heirs. The end left me reeling, can’t wait for the third novel. I need to go scream into a pillow for a few minutes to process all my feelings about this book. Read it!
Read more
Helpful
Comment Report abuse

Segiroth
2.0 out of 5 stars ... A failed follow up
17 December 2019 - Published on Amazon.com
Format: Kindle EditionVerified Purchase
Ok so this book finally intersects the stories from book one! Sadly this is not a good thing. Four years have passed since book one, and characters are exactly the same which given their ages and events of book one makes little sense, especially the prince falls on his face plot wise.
After hiding for four years his plan is to catch some long gone witches to prove to his father, who is trying to hunt him down and kill him, that magic is not all bad.... that worked as a desperate boy’s idea in book one where he needed something to cling to to keep going right after he found out he had magic... after these many years it’s stupid.com level of motivation. The big reveal you can see miles away the setup for the final or next book makes no sense, the girl has zero reason to follow the boy on his crusade, while his plan has zero sense given how his homeland views him. Book one shad promise but book two kills it most efficiently. Also does anybody keep count of the ninja mutant zombies ? By now they should be extinct unless they multiply based on book length given that they were a one time creation and not some species or plague.

conemaugh
5.0 out of 5 stars A excellent read!
9 January 2020 - Published on Amazon.com
Format: Kindle EditionVerified Purchase
This book takes places four years after Blood of Heirs, the kick-off book in this series. I came into this sequel with high expectations; Ms. Wanstall-Burke did not disappoint! This book had it all for a fantasy fan; zombies, ice dragons, swordplay, sorcery and skullduggery. A very fast paced and enjoyable read. Highly recommend for both followers of the genre and fiction readers in general. If you haven't gotten and read the first book, do so! First class world building and story-telling! Enjoy.
Read more

Calvin Park
4.0 out of 5 stars An excellent sequel
8 January 2020 - Published on Amazon.com
Format: Kindle Edition
I read Blood of Heirs last year and thoroughly enjoyed it, so when I realized Legacy of Ghosts was releasing, I knew I needed to pick it up right away and give it a read. I was not disappointed. Legacy picks up the story several years after Blood of Heirs concluded. Once it does begin, however, it doesn’t miss a beat. Wanstall-Burke quickly brings readers up to speed on what has happened in the intervening years and then we’re treated to a quickly moving plot that races to a satisfying and yet oh-so-enticing conclusion.

I loved both Ran and Lidan’s arcs in this book. Both were engaging, fun, and provided some excellent emotional beats. The early going in the two storylines was a tale of two stories for me, however. I immediately connected with Ran, enjoying the magical aspects of the story and his own growth in the years between Blood of Heirs and this story. I quickly had a sense of his growth and what he still struggled with, and the side characters who make up his team were a lot of fun. Lidan’s story, on the other hand, was a bit more complicated for me. Her family is so dysfunctional it hurts, and I felt—in the first twenty percent of the story—that Lidan continued to lack agency. That was a complaint of mine in the first book as well. I will admit to being a little concerned at the beginning of this book. I shouldn’t have been. Wanstall-Burke deftly weaves Lidan’s tale together in a way where we see tremendous growth in her. By the time I was a quarter of the way in, I was completely sold and loving it. The way the author tells the story makes Lidan an incredibly compelling character and I loved her arc in this one. Wanstall-Burke also excels at dropping breadcrumbs in her story, little bits of foreshadowing that have significant payoff in the second half of the book. This was wonderful and gave a coherence to the story that was tremendous. These elements combine to give us a back half that is amazing at moments and shocking at others. The payoffs are big. The themes that come together—like choice—are meaningful, and the character interactions are magnificent. The pacing also deserves praise in bringing this all together. It is incredibly even throughout. It builds steadily, changing back and forth between Lidan’s and Ran’s perspectives, always keeping you engaged. Then, it builds to a crescendo of a climax that leaves you longing for that third book.

My dislikes are truly more about personal preference than any deficiencies in the story itself. For instance, I thoroughly enjoyed the magic in this book and loved how it had significant impact on the plot. But there were moments when I was left scratching my head a little about the rules of the magic or why something worked this way but not that way. I guess I would have liked to have seen a little more explanation of the mechanics of the magic to understand more the way it was impacting the plot.

Legacy of Ghosts is an action-packed, perfectly paced tale that has wonderful and engaging emotional moments. It builds on the foundation left by the first book and sets things up for what should be a stunning and spectacular conclusion to the trilogy.

5 – I loved this, couldn’t put it down, move it to the top of your TBR pile
4 – I really enjoyed this, add it to the TBR pile
3 – It was ok, depending on your preferences it may be worth your time
2 – I didn’t like this book, it has significant flaws and I can’t recommend it
1 – I loathe this book with a most loathsome loathing

Read more
Go to Amazon.com to see all 6 reviews 4.2 out of 5 stars
Get FREE delivery with Amazon Prime
Prime members enjoy FREE Delivery and exclusive access to movies, TV shows, music, Kindle e-books, Twitch Prime, and more.
> Get Started
Back to top
Get to Know Us
Make Money with Us
Let Us Help You
And don't forget:
© 1996-2020, Amazon.com, Inc. or its affiliates