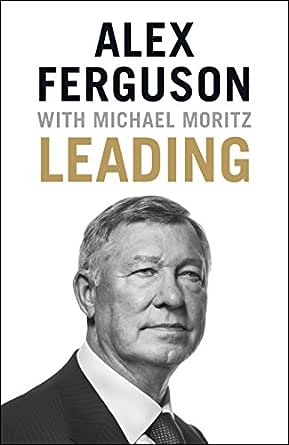 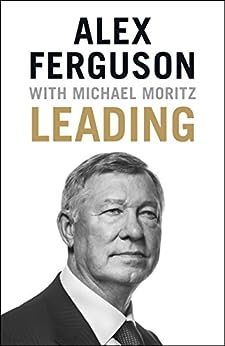 LEADING is about leadership, management and the pursuit of success. It's a fantastic book, one of the best of its kind. The defining quality of Ferguson and Moritz's book is its clarity. The pair discuss leadership from a purely practical perspective, their raw material being Ferguson's vast experience. If there's one word, though, that characterises his philosophy of management it's discipline... And yet what comes through very strongly is humility, even vulnerability.
Every success of his, you realise, has been hard-won. Failure has been a constant threat. Nagging anxiety he just accepted 'as part of my job'. And he wouldn't have had it any other way.

Ferguson, the McMaster of leadership. (bbc.co.uk)

For those interested in the subject of leadership, be it managing people effectively and getting the best out of them or learning which qualities and traits separate those who manage and those who inspire, Leading is a worthwhile read.
Football fans might complain that the book is over too quickly, even though Ferguson provides 343 pages of entertaining stories and observations. Structuring his sermons in an easily read format is the latest managerial masterstroke from a man who made a career out of regularly producing them.

Full of fascinating insights into a managerial career that spanned over four decades. (the Telegraph)

I think he's one of the world's all-time great leaders ... I think there's something to be learned from him for virtually every leader in whatever industry it might be. (Professor Anita Elberse, Harvard Business School)

The foundation for its (Man Utd's) success was built by Ferguson, whose near-pathological obsession with football - and with winning - is a case study in leadership. (Lionel Barber Financial Times)

Ferguson is one of the most successful men in his field - not just in football, but any sport in any era. He defied the norms and the scale of his accomplishments will only become more apparent with the passing of time. History will see that Ferguson grows, not diminishes. (Matt Dickinson The Times)

An inspirational book about leadership from the most successful British football manager of all time.
See all Product description

amazon addict
2.0 out of 5 stars Don’t buy. Book is not about Ferguson but a trillion dollar investor rambling about his money!
23 March 2018 - Published on Amazon.com
Verified Purchase
Not a book on leadership about Ferguson. Mostly about playing and coaching career. Talks briefly about his leadership beliefs and styles. Not expecting drills but maybe a little insight how he handled some difficult situations with top players.
The author talks more about himself and his multi trillion dollar invest company. I felt the author loves to talk about himself so much he couldn’t find enough listeners that would pay attention to him for weeks. So he wrote a book about an iconic figure so he could hold you hostage to hear himself write about himself. The last 30-40 pages were nothing about Ferguson but billion dollar silicon valley companies and how he has made billions off this. Please buy this book back
Read more
5 people found this helpful

Atila Yumusakkaya
4.0 out of 5 stars Man of Principals
25 January 2018 - Published on Amazon.com
Verified Purchase
Sir Alex Ferguson managed a great football club as Manchester United, but it was he who made this team that great. The first thing that made him so successful was that he followed an advice that he should have been on the sidelines watching and supervising. In this way he was able to see the big picture. He was well aware that the system in a football club is not so complicated as in a high-tech company. Despite his spectacular accomplishments, he's too humble to say that he could be more successful.

I find it funny that he thought swapping shirts were extravagance and told the players that they needed to pay from their pockets for the shirts they would swap. I think this character trait comes from his Scottish genes.

This is not just a football book, but also a resource we can draw lessons about our own lives at the same time. The only thing I criticize in the book is the strained effort of the author to draw analogy between the principles and thoughts of Sir Alex and the successful firms in the Silicon Valley.
Read more
One person found this helpful

simonefix
5.0 out of 5 stars A pint with Sir Alex
26 July 2019 - Published on Amazon.com
Verified Purchase
Reading this book is like sitting by a fireplace with a pint of ale, hearing Sir Alex Ferguson talking you about leadership.
Lots of nuggets of wisdom from a hard worker who always put the maximum attention to details.
What emerges is the utmost respect for his colleagues, rival teams. Good read not only for soccer/football fans, but for whoever is interested in leadership and self improvement.
Read more

Jonoy Smith
5.0 out of 5 stars For future Football Managers & Leaders of Clubs
7 September 2019 - Published on Amazon.com
Verified Purchase
This books dives well into Ferguson's practices, both sucesses & failures and paints a picture on how to be a leader in the pitch, off the pitch & in your personal life away from football/soccer. I use this as a knowledge for I desire to build an excellent club/academy for my country. This book will allow you to glean from the eyes of one of if not THE greatest managers of all time in the sport
Read more

Samuel Mao
5.0 out of 5 stars Leadership in an organization and of your personal life
4 April 2019 - Published on Amazon.com
Verified Purchase
I finally read this book about a week ago after I realized some of my leadership faults during a project. I resorted to this book and it helped tremendously. Sir Alex did not mince his words about the mistake he made in the past and the methods that helped him succeed. Highly recommend for anyone in a leadership position or in transition to a leadership position.
Read more
Go to Amazon.com to see all 100 reviews 4.5 out of 5 stars
Get FREE delivery with Amazon Prime
Prime members enjoy FREE Delivery and exclusive access to movies, TV shows, music, Kindle e-books, Twitch Prime, and more.
> Get Started
Back to top
Get to Know Us
Make Money with Us
Let Us Help You
And don't forget:
© 1996-2020, Amazon.com, Inc. or its affiliates