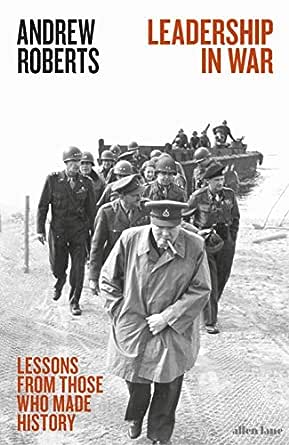 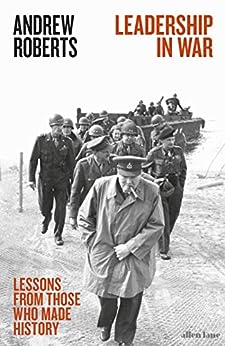 Leadership in War: Lessons from Those Who Made History Kindle Edition

Meticulously researched and full of revelations, this is a fascinating read. (Sun)

Leadership in War is an understated treasure of 2019...a tour de force of historical portraiture. (Barnaby Crowcroft National Review)

illuminating experiences are presented in easily digestible form in Andrew Roberts's new book, Leadership in War, a collection of nine portraits of wartime leaders, from Napoleon Bonaparte to Margaret Thatcher. These portrayals were originally delivered as lectures by Roberts, a prolific historian of World War II and biographer of Napoleon and Churchill. The profiles of Napoleon and Dwight D. Eisenhower are the most salient for business readers, but it is not difficult to find insight in nearly all of them (Daniel Akst Strategy & Business)

A comparison of nine leaders who led their nations through the some of greatest wars the world has ever seen and whose unique strengths - and weaknesses - shaped the course of human history.
See all Product description

539hLz80kx
5.0 out of 5 stars What Makes a Great Wartime Leader?
17 November 2019 - Published on Amazon.com
Verified Purchase
Each chapter of this book is superbly crafted. Professor Roberts writes about human motivations, which can be conflicting and difficult to discern. He does so clearly and concisely. He humanizes each leader, illustrating each one’s strengths and weaknesses, all the while extracting lessons for effective leadership in war.

One thing that particularly struck me was the author’s theory as to why General Marshall did not waver on his insistence that a second front be created in northern France. I had never read this before. It is interesting to see historical dots connected in new ways. To find out what the theory is, buy the book.
Read more
5 people found this helpful

Lexington Green
5.0 out of 5 stars Andrew Roberts surveys military leaderships from the Olympian heights of high command
13 December 2019 - Published on Amazon.com
Verified Purchase
This is an enjoyable, interesting and engaging book from the ever-reliable Andrew Roberts.

In each case Roberts provides an insightful overview, and several unique or interesting insights.

For example, with regard to Marshall, Roberts speculates that the incessant insistence on an early Second Front, which would likely not have succeeded before its actual launch date in 1944, was more a matter of Marshall pushing to maintain momentum and focus, and that Marshall knew an early second front in France was not practical. This can never be confirmed, but given Marshall’s professionalism and knowledge of the actual factors in play, this seems correct.

(As an aside, I have long held to a similarly unprovable notion that FDR held Marshall back from commanding Overlord, because if it failed, Eisenhower would be sacked, and Marshall would be the only person with the prestige and standing to rally a defeated army and make a second try.  Of course FDR confided in no one, so we will remain forever in the dark about his motives and thinking to an exceptional degree for a person of his public and historical stature.)

Roberts provides a point-by-point rebuttal of various critiques of Eisenhower, which is nicely done.  Eisenhower in fact made very few mistakes and accomplished everything he needed to do.  Panache and dash were not necessary, and as we now know, Eisenhower was a deeper and more ruthless figure than he was believed to be in his own lifetime.

Roberts’ discussion of De Gaulle is balanced and fair, and shows the mix of exasperation and respect De Gaulle has always justifiably provoked.

Roberts quotes Enoch Powell about Margaret Thatcher as the Iron Lady, in a passage which was unfamiliar to me. This is one of several such novel details in the book, which deals with very well known figures. Yet there is always more to learn about even such titans as these.

Having now read five books by Roberts, I can recommend anything by him with confidence.
Read more
3 people found this helpful

abk
5.0 out of 5 stars An incisive and elegant treatise on leadership
11 November 2019 - Published on Amazon.com
Verified Purchase
Andrew Roberts opines on the nature and secrets of leadership in this beautifully written book.
He details the lives of Napoleon, Nelson, Churchill, Stalin, Hitler, Eisenhower, Marshall, De Gaulle and Thatcher and draws important conclusions regarding the traits and characteristics of leadership.
This is a thoughtful and compelling read and its conclusions are most important.
Read more
5 people found this helpful

Frances V.
5.0 out of 5 stars Absolutely fascinating
28 November 2019 - Published on Amazon.com
Verified Purchase
In reading Andrew Roberts’ fascinating book entitled “Leadership in War”, I was disappointed in one grievous error. He considers Napoleon’s defeat at Waterloo due to Napoleon’s mistakes.
The author lists many of Napoleon’s qualities but is astonished at how poorly his army fought contradicting many shrewd maneuvers of many previous battles. Although the author does remark on the fact that Napoleon was very ill and confined to his bed. Throughout the battle he was compelled to rely on the incompetence of his commanders despite his instructions given at his sick bed, the one factor that explains his defeat. At one point in the battle, Wellington was at the point of defeat but saved by the incompetence of Napoleon’s officers.
Although the author set out the many factors involved, he almost ignored that one decisive factor that explained Napoleon’s defeat. Nevertheless, the author writes beautifully. The book is absolutely fascinating.
Read more
3 people found this helpful

history fan
2.0 out of 5 stars There are much better efforts out there such as the 33 Strategies of Warfare by Greene.
2 January 2020 - Published on Amazon.com
Verified Purchase
Very little new information here. The chapter about Adolf HItler spends pages describing him as an absolute moron citing quote after quote from Martin Borman’s notes. Why did the author choose to include him in this text then? The chapter on Napoleon was very high level and did not explore the man’s true brilliance as a leader. Not a particularly worthy effort in my opinion.
Read more
3 people found this helpful
Go to Amazon.com to see all 14 reviews 4.1 out of 5 stars
Get FREE delivery with Amazon Prime
Prime members enjoy FREE Delivery and exclusive access to movies, TV shows, music, Kindle e-books, Twitch Prime, and more.
> Get Started
Back to top
Get to Know Us
Make Money with Us
Let Us Help You
And don't forget:
© 1996-2020, Amazon.com, Inc. or its affiliates