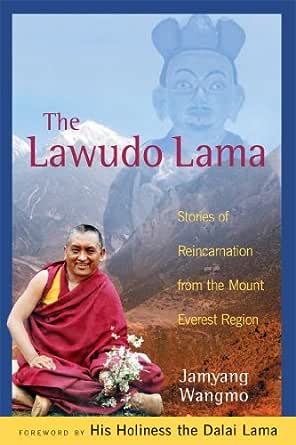 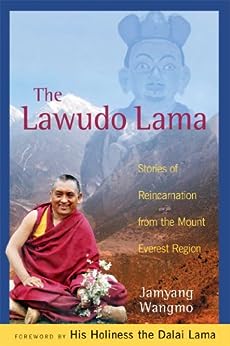 The Lawudo Lama: Stories of Reincarnation from the Mount Everest Region Kindle Edition

"The Lawudo Lama is an amazing tale recounting the lives of both the internationally known Lama Thupten Zopa Rinpoche and his previous incarnation, Lama Kunzang Yeshe. Unlike numerous other studies of Sherpa culture, religion, and history, The Lawudo Lama offers an account from within the tradition, as experienced by the main protagonists. Author Jamyang Wangmo, as one of Lama Zopa's early disciples--also among the few foreigners to have spent long stretches in solitary retreat at the cave hermitages of the Lawudo Lama--is uniquely qualified to write about the subject."--Hubert Decleer, Director of the Tibetan Studies Program for International Training, and author of Lightning Terror

"I have no doubt that readers of this book will find here encouraging evidence that, even in this day and age, where there is real faith, good motivation, and a great deal of hard work, the Dharma will flourish and grow."--from the foreword by the Dalai Lama

"In some ways, the present volume is three books in one. First, it is an introduction to Sherpa culture and geography--a rare treat in itself. Second, it is a biography of Lama Kunzang Yeshe, the first Lawudo Lama, which takes into account both his outer and inner life. Third, it is an autobiography of Kunzang Yeshe's reincarnation (tulku) in the form of Thubten Zopa Rinpoche ("Lama Zopa"), who was born into a Sherpa family in Nepal and today is the spiritual director of the Foundation for the Preservation of the Mahayana Tradition (FPMT). [...] This volume is filled with touching and amazing stories of Tibetan and Nepalese yogis, who have dedicated their whole life to realizing enlightenment and serving the spiritual awakening of others. One gets a good sense of how great one's dedication to the Dharma must be to break through the karmic bonds of conventional life but also that even a lay practitioner can attain a high level of realization. Most importantly, this book offers one wonderful reassurance that great masters and teachings do still exist and are available to anyone who is serious about Dharma practice. "--reviewed by Georg Feuerstein, author of The Yoga Tradition and Yoga For Dummies, for Traditional Yoga Studies Interactive

"Religious biographies form a central part of Tibetan literature, and such accounts are now becoming important for Western Buddhists as well. The Lawudo Lama succeeds in combining the traditional style with a modern narrative and in illuminating the life stories through their context in the traditions of the Khumbu region of Nepal."--Franz-Karl Ehrhard, Professor of Tibetan and Buddhist Studies at Ludwig-Maximilians University, Munich

"This fascinating book provides a unique--earthy yet mystical--insider's view of Himalayan life in general and of Sherpa life in particular. Will be very interesting to anyone who has travelled in the Himalayas and greatly inspiring to anyone who wishes to live a deeply spiritual life. Where else can one find a story in which the characters travel from life to life, continuing to teach, guide and support each other--it will stretch your mind and move your heart."--Lorne Ladner, author of The Lost Art of Compassion --This text refers to the paperback edition.

Jamyang Wangmo (Helly Pelaez Bozzi, formerly Jampa Chokyi) was born in Spain in 1945 and trained in law. After spending time in India and Nepal, she decided to take ordination as a Buddhist nun in 1972. A watercolor artist as well, she has spent much of the past few decades doing retreats in Dharamsala, India, and in the Solo Khumbu region of Nepal.

Tenzin Gyatso, the Fourteenth Dalai Lama, is the spiritual leader of the Tibetan people. Born in northeastern Tibet in 1935, he was as a toddler recognized as the incarnation of the Thirteenth Dalai Lama and brought to Tibet's capital, Lhasa. In 1950, Mao Zedong's Communist forces made their first incursions into eastern Tibet, shortly after which the young Dalai Lama assumed the political leadership of his country. In 1959, Chinese forces occupied the city, forcing His Holiness to escape to India. There he set up the Tibetan government-in-exile in Dharamsala, working to secure the welfare of the more than 100,000 Tibetan exiles and prevent the destruction of Tibetan culture. In his capacity as a spiritual and political leader, he has traveled to more than sixty-two countries on six continents and met with presidents, popes, and leading scientists to foster dialogue and create a better world. In recognition of his tireless work for the nonviolent liberation of Tibet, the Dalai Lama was awarded the Nobel Peace Prize in 1989. In 2012, he relinquished political authority in his exile government and turned it over to democratically elected representatives. He is the author of numerous books, including The Good Heart, The Meaning of Life, The World of Tibetan Buddhism, and The Compassionate Life. --This text refers to the paperback edition.