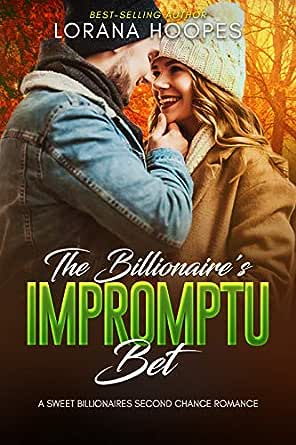 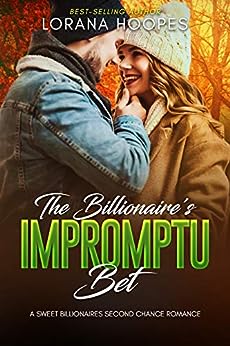 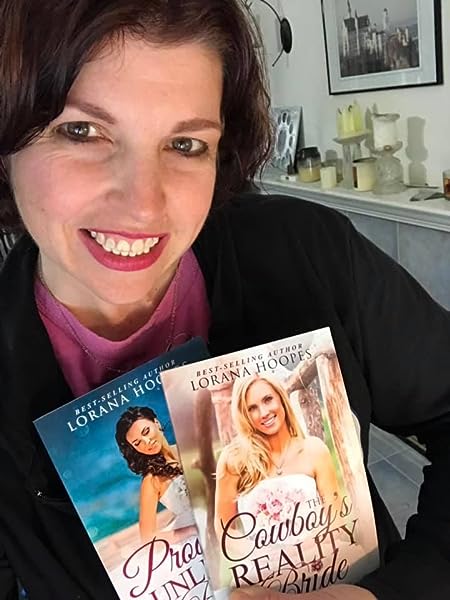 SWAT Officer Jesse Calhoun wasn't looking for love when he met Brie Carter. And at first, he thought they'd have nothing in common, but when a new side of her emerges, will she win his heart? Or will her secret destroy their relationship?

Daughter of a billionaire Brie Carter was bored and looking for a way to spice up her life. When her friend offered a bet with a prize Brie wanted, she agreed, but she never counted on falling in love on the way. The problem is, how does she tell Jesse about the bet without losing him?

Can love unite these two opposites? Find out in this sweet opposites attract, second chance romance by Amazon best-selling author Lorana Hoopes by clicking the button above.

Kindle Customer
TOP 500 REVIEWER
4.0 out of 5 stars Good bet
Reviewed in Australia on 24 October 2019
Format: Kindle Edition
I enjoyed the characters and the whole story. It has depth and development, which makes them seem more real, and increases the value and enjoyment of the book, for me. It was a very satisfying read. Left me feeling good, and challenged to do good for others🥰
Read more
Helpful
Comment Report abuse

Jay
5.0 out of 5 stars Money doesn’t buy love
Reviewed in Australia on 11 January 2020
Format: Kindle Edition
I was lucky to be able to read this book
I like this book, and it although the character has money it doesn’t fill her heart. It shows people need to work and not rely on parents to give them everything. This book it’s filled with romance and dangerous situations and personal growth and to rely on God in the darkest times.

Shebb
TOP 500 REVIEWER
4.0 out of 5 stars A sweet unexpected romance.
Reviewed in Australia on 26 October 2019
Format: Kindle Edition
A sweet story of an average rich girl turned on her head by an unassuming middle class guy. I enjoyed reading about Brie and Jesse's unlikely connection.
Read more
Helpful
Comment Report abuse
See all reviews from Australia

Redrabbitt
5.0 out of 5 stars I’LL TAKE THAT BET
Reviewed in the United States on 29 August 2018
Verified Purchase
I enjoyed this clean Christian based story that is an addition to the contemporary Lawkeepers series and also a S.W.A.T book. There is a great cast of characters along with two special people and some of their personal issues that will become involved in a relationship. This story has strong Christian principles and faith in God.

Brie Carter, daughter of a billionaire, has lived off of Daddy her whole life. Shopping, partying, and never having to do anything substantial. Her best friend, Ariel, in a matter of boredom, gets Brie to accept a dare of a bet to have a guy fall for her and propose. The prize, she will be sure that Brie has a date with her brother, Kade, a movie star.

Jesse Calhoun is a member of the SWAT team in New York. Where the other guys are enjoying going out drinking, it is not something Jesse does, especially since he became a Christian. The others convince him to join them at the bar after a bad day that resulted in the loss of lives, and he begrudgingly agrees.

The plot will have Ariel and Brie showing up at a bar, and while there Ariel will notice a table of six men, knowing they are law enforcement. She will look the men over and pick out one that is part of the bet that Brie must approach. Brie does her part, buys a round of beers for the table and approaches where they invite her to have a seat. The plan is working, but Jesse isn’t cooperating. It will take the encouragement of Brendan to convince Jesse that Brie is interested in him.

Brie’s world will get turned upside down when her father makes a directive to her about her out of control spending, get a job or get married, and she has one month to do it in. Learning from Brendan that Jesse likes Java Hut, she gets her a job there, also hoping to get to have time with Jesse.

The story will have Jesse being so different from the men that Brie normally encounters, but there is a unique and genuine likeness to him that she calls off the bet with Ariel right away. Getting to know Jesse is a pleasure and then he introduces her to a new world, one that puts others above him or her. Taking her to a children’s hospital and showering the sick children with presents to bring joy to their life, and taking her on simple but enjoyable dates. Inviting her to church and letting her learn more about God will be the measure of whether or not she is right for him.

“If Jesus was what made Jesse so different, she was beginning to think she wanted Him too.”

I loved how Jesse is never pushy about religion or God, he invites and allows her to make up her mind. Jesse’s life reflects his belief, and the more Brie is around him, the less she wants with what the world has to offer. She continues to work her job and now wants to go back to school. But not everyone is going to be happy with the changes in Brie and trouble is on the way. Will the world win or will love come shining through?

“God whispers in our pleasure, He speaks in our conscience, but He shouts in our pain.”

The story is a beautiful example of putting your faith and trust in God, especially in trying times and to pray and think of others. The story is full of second chances, new beginnings, and relationships with God being the center.

“We could certainly use more kindness in the world.”

Marie P
5.0 out of 5 stars All bets are off
Reviewed in the United States on 29 August 2018
Format: Kindle EditionVerified Purchase
Brie meets Jesse on a bet. But as they get to know each other, she realizes there's more to him than she realized. I loved watching Brie, the spoiled billionaire 's daughter learn that there's a whole other world out there. And Jesse learns to shed his preconceived notions about her. I love the message in the story, the romance and watching two very different people find they had more in common than they would have guessed.
Read more
One person found this helpful
Helpful
Sending feedback...
Thank you for your feedback.
Sorry, we failed to record your vote. Please try again
Report abuse

Ester Farthing
5.0 out of 5 stars A great book
Reviewed in the United States on 29 September 2018
Format: Kindle EditionVerified Purchase
Brie having a night out meets Jesse who was a Swat officer. He was a Christian and Brie was a rich young woman who was bored. Upon meeting Jesse they started seeing each other. She found out that he attended church and started going with him. Thru him she came to know Jesus and it changed her. Will they had a good relationship with each other?
Read more
One person found this helpful
Helpful
Sending feedback...
Thank you for your feedback.
Sorry, we failed to record your vote. Please try again
Report abuse

Nelsbels
3.0 out of 5 stars SWAT romance
Reviewed in the United States on 31 October 2018
Format: Kindle EditionVerified Purchase
This was very clean and sweet. Seemed short. I loved the characters, and the story was nice.
A little preachy. Very Christian . Good writing. Good editing.
Read more
2 people found this helpful
Helpful
Sending feedback...
Thank you for your feedback.
Sorry, we failed to record your vote. Please try again
Report abuse

Deb
5.0 out of 5 stars Really enjoyed
Reviewed in the United States on 27 September 2018
Format: Kindle EditionVerified Purchase
This book will really keep you entertained. It has some nice surprises. Really enjoyed how everything worked out for the good. I don't want to give away of the exciting details away. Please read this story. It's worth taking the time.
Read more
One person found this helpful
Helpful
Sending feedback...
Thank you for your feedback.
Sorry, we failed to record your vote. Please try again
Report abuse
Load more international reviews

A Wonderful Book
5.0 out of 5 stars A Wonderful Book
Reviewed in the United States on 2 October 2018
Format: Kindle EditionVerified Purchase
I really enjoyed this book. I have enjoyed the "Lawfully" books. This one in particular shows that with God's help, people can change. I loved that they helped others that needed help and found themselves along the way.
Read more
One person found this helpful
Helpful
Sending feedback...
Thank you for your feedback.
Sorry, we failed to record your vote. Please try again
Report abuse

Linda A W
5.0 out of 5 stars AWESOME BOOK AND AUTHOR
Reviewed in the United States on 18 September 2019
Format: Kindle EditionVerified Purchase
I absolutely loved this book! I was so glad Brie turned to God! I highly recommend this book!
Read more
One person found this helpful
Helpful
Sending feedback...
Thank you for your feedback.
Sorry, we failed to record your vote. Please try again
Report abuse

Carmen Harris
5.0 out of 5 stars Lawfully Pursued
Reviewed in the United States on 4 September 2018
Format: Kindle EditionVerified Purchase
Nothing sweeter than seeing a person transform to whom God plans for you to be. Another Lawfully book
I have fallen in love with.

I voluntarily review this arc.
Read more
One person found this helpful
Helpful
Sending feedback...
Thank you for your feedback.
Sorry, we failed to record your vote. Please try again
Report abuse

Huanne Woodward
5.0 out of 5 stars Wanna bet?!
Reviewed in the United States on 29 September 2018
Format: Kindle EditionVerified Purchase
This story is great showing life and love is more important than being able to buy Everything with money and it’s good to have skills!
Read more
Helpful
Sending feedback...
Thank you for your feedback.
Sorry, we failed to record your vote. Please try again
Report abuse