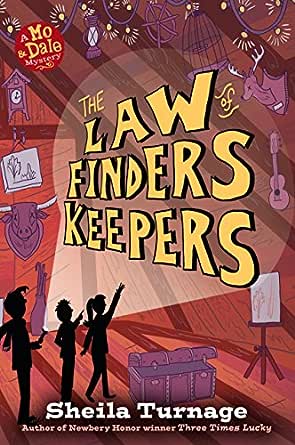 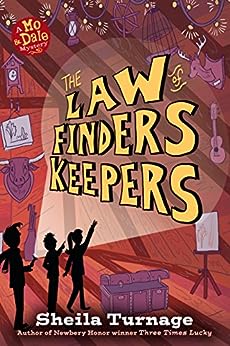 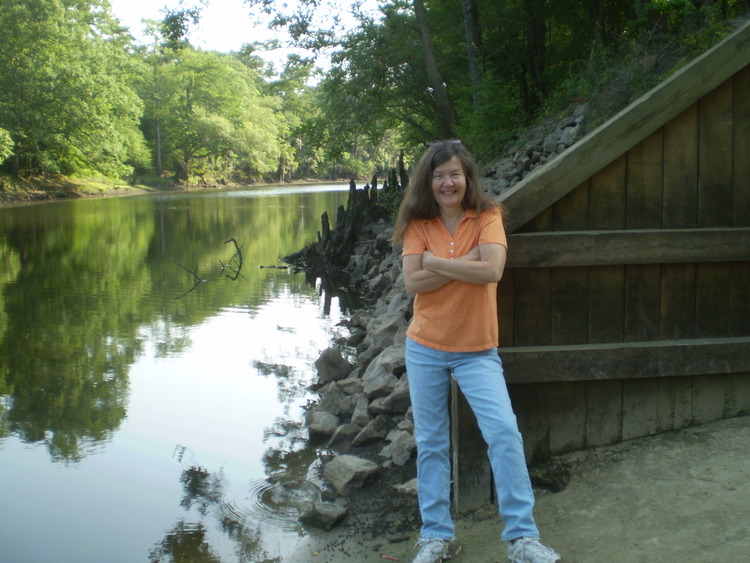 "[A] lively cast rich with heartfelt emotion . . . wit propels this fast-paced treasure-hunt tale into a pitch-perfect delight . . . if [readers] can get through the end without welling up, they're tougher than most--it's absolutely worth the wait."--Kirkus, starred review "Turnage's fine-tuned talent for storytelling is as evident as her understated, irrepressible humor and her creative ability to turn a phrase . . . The large, intergenerational cast of idiosyncratic characters enriches this first-person narrative at every turn. Amusing, dramatic, and tender."--Booklist, starred review "Every volume a standout, the Mo and Dale Mysteries series ends on as high a note--just as it began. Turnage delivers, once again, a fast-paced adventure with a cast of characters who are as real as they are quirky and laugh-out-loud dialog. . . . Readers of character-driven novels filled with humor will be thrilled by this smart and sweet series, start to finish."--VOYA, starred review

"What do you get when you combine Because of Winn-Dixie's heart with the mystery and action of Holes? . . . Mo LoBeau is destined to become a standout character in children's fiction."--Kirkus, starred review "Here is a writer who has never met a metaphor or simile she couldn't put to good use."--Publishers Weekly, starred review "Turnage's lively novel features a distinctive voice and a community of idiosyncratic characters."--Booklist, starred review "The heroine of Sheila Turnage's "Three Times Lucky" is so plucky that young readers may wish she lived next door."--Wall Street Journal "A literary descendant of Scout Finch of "To Kill a Mockingbird"--Mo LoBeau announces this novel's mystery from behind the counter of the Tupelo Diner: 'There's been a murder and we're out of soup.'"--Newsday PRAISE FOR THE GHOSTS OF TUPELO LANDING
- New York Times bestseller "The perspicacious Mo LoBeau is at it again! . . . humor and action abound."--School Library Journal, starred review "Just as its predecessor did, this sequel shines thanks to Turnage's deft, lyrical language and engaging characters."--Kirkus, starred review "Turnage's ability to create convincing characters and her colorful use of language combine to make this a fresh, droll, rewarding trip to Tupelo Landing."--Booklist, starred review "The budding detective has clearly taken to heart something her foster mother always emphasizes: 'All the world's a stage, sugar, so hop on up there.'"--Publishers Weekly, starred review "A rollicking sequel."--Wall Street Journal PRAISE FOR THE ODDS OF GETTING EVEN
"With her mix of homespun humor, well-plotted mystery, and delicious characterization . . . Turnage's tale is full of heart."--Kirkus, starred review "Another rewarding adventure . . . narrated by Mo in her distinctive, imaginative voice. The writing lulls you with laughter, then occasionally blindsides you with unexpected tenderness."--Booklist, starred review "Well crafted, with fast pacing; readers will gallop through the nonstop action to a satisfying conclusion. A must-read for fans of the first two volumes, and a rewarding adventure all on its own."--School Library Journal "Turnage's rich voice, abundance of heart, and wicked sense of humor handle the dynamics of the town with verve . . . [A] clever, sweet, laugh-out-loud funny series."--VOYA "Friendship prevails in this fine novel . . . There's a complexity to the characters, from mean-as-a-snake Macon to drop-dead-handsome Lavender, all carefully developed throughout the series, creating a terrific read."--Horn Book "A rousing tale of action, adventure, and intrigue. . . . So sit back and enjoy a well-told yarn that is sure to please readers of all ages."--SLC --This text refers to the paperback edition.

Sheila Turnage is from eastern North Carolina, just like Miss Moses LoBeau, the protagonist from Three Times Lucky. Her first novel for children, Three Times Lucky, is a Newbery Honor winner, a New York Times bestseller, an E.B. White Read-Aloud Honor Book, and an Edgar Award finalist. It has been nominated for six state awards and has been licensed in five countries. Her follow up book, The Ghosts of Tupelo Landing, also a New York Times bestseller, has received five starred reviews, is a SIBA Okra Winter 14 pick, and a Junior Library Guild selection. Sheila is also the author of two nonfiction adult titles: Haunted Inns of the Southeast and Compass American Guides: North Carolina, as well as one picture book, Trout the Magnificent illustrated by Janet Stevens. Her next children's book, The Odds of Getting Even (a Mo & Dale mystery) will be available in October 2015. --This text refers to the paperback edition.

The heart-warming conclusion to the beloved Mo & Dale Mysteries by Newbery Honor author Sheila Turnage featuring the most shocking case yet! --This text refers to the paperback edition.
Read more

4.7 out of 5 stars
4.7 out of 5
88 global ratings
How are ratings calculated?
To calculate the overall star rating and percentage breakdown by star, we don’t use a simple average. Instead, our system considers things like how recent a review is and if the reviewer bought the item on Amazon. It also analyses reviews to verify trustworthiness.

Joe O'Hara
5.0 out of 5 stars This is just out of this world
Reviewed in the United Kingdom on 27 May 2019
Verified Purchase
This book has made me realize what it feels like to have lost someone special in your life it has made me realize how lucky I am to have a mother and father. This is the best series of books that I have ever read I do not know how Sheila got this story because this book is so touching Anyone who likes mystery books
These are for you
If you don’t like these I don’t know what you will like
From
David

Darkxy
5.0 out of 5 stars Amazing conclusion to fantastic series
Reviewed in the United States on 5 April 2019
Verified Purchase
I'm torn between being sad over Mo and Dale's adventures to be over and being excited about what Sheila Turnage is going to come up with next.
I truly consider this series a mini-classic of sorts, something that I'd like to introduce my kids to along with Mary Poppins, Pippi, Alice, Nancy and others in the "the coolest girls in literature" gang. The key, I believe, is managing the whodunit part with coming-of-age part so well, and the brilliant sense of humor.
We get to go on the treasure hunt with Mo, Dale and Harm, celebrate dramatic Valentine's day at the cafe, and finally get a resolution to an “Upstream Mother of Mo” mystery. It's wonderfully awesome, dangerous, fun, exciting, touching and heart-warming altogether. I laughed, I cried, and I smiled satisfyingly with the turn of the last page.
I wouldn't be opposed (read: I'd be ecstatic) if Sheila Turnage came back to these characters in the future in one way or the other, but I'm still stoked about what's coming next, whatever it is. As far as “The Law of Finders Keepers” ... You SHOULD read the entire series. No, you MUST. Start with "Three Times Lucky" and thank me later.
Goodbye, Mo! I'll see you on the re-reads.

J. B.
4.0 out of 5 stars Love this series!
Reviewed in the United States on 11 October 2018
Verified Purchase
It was nice to visit with Mo & Dale again. I truly hope Shelia Turnage decides to continue with these characters. It would be lovely to read their adventures as they get older.
Read more
2 people found this helpful
Report abuse

S. Leggat
5.0 out of 5 stars Laugh out Loud Funny as well as Heartwarming!
Reviewed in the United States on 2 September 2020
Verified Purchase
This conclusion to the Mo and Dale series is the best of the four. Characters come of age, are fully developed and lovable, and are completely believable. My poor husband had a tough time falling asleep as it is impossible to read this without laughing aloud!
Kudos to Sheila Turnage for getting hat kids want and love...and can step up to!
Read more
Report abuse

Tammy Federspiel
5.0 out of 5 stars The Law of Finders Keepers doesn’t disappoint!
Reviewed in the United States on 2 May 2020
Verified Purchase
I love all of the Mo and Dale stories! The adventure is fun, the characters quirky and endearing. The language is lyrical! I am a fast reader but even I slow down as I read these words that meander along, dripping southern. The mystery of Mo’s Upstream Mother is tied up nicely. Excellent series that I hope kids love as much as I do!
Read more
Report abuse
See all reviews
Get FREE delivery with Amazon Prime
Prime members enjoy FREE Delivery and exclusive access to movies, TV shows, music, Kindle e-books, Twitch Prime, and more.
> Get Started
Back to top
Get to Know Us
Make Money with Us
Let Us Help You
And don't forget:
© 1996-2020, Amazon.com, Inc. or its affiliates