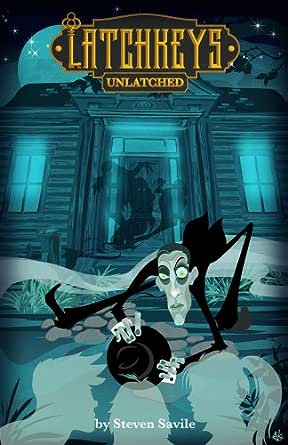 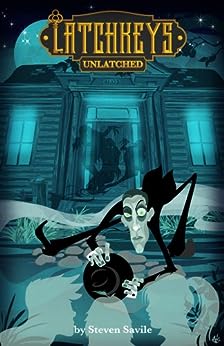 A. KAPLAN
5.0 out of 5 stars Opening a door to a new world of mystery
Reviewed in the United States on 25 January 2012
Verified Purchase
A new children's fantasy series, by Steven Savile and others, gets off to a good start in this first installment. The story introduces Matt Fisher, a teenage boy who has lost his mother, and whose father's work takes him out on the road most of the time. While he doesn't know it, Matt is special. Specifically, he's special to the mysterious house of Tanglewood. Having grown around the tree at the heart of the world, Tanglewood is filled with doors leading to times and places throughout history... and some times and places that never were. Pursued by the equally mysterious Mr. Twig, Matt finds himself caught up in strange forces that he cannot understand.

This first Latchkeys story is very much the first installment of a series, rather than a complete story in its own right. That's fine; it's a quick read, and a bargain at 99 cents. In Matt Fisher, Savile has created a likeable hero who the reader enjoys spending time with. In Twig, he has created a creepy villain with uncertain motivations. And, in Tanglewood, he has created the potential for just about any sort of story he and his fellow series authors care to tell.

Savile drops just enough hints about the other characters to intrigue the reader. While none of the others are fleshed out as fully as Matt, this is still just the first installment; there's plenty of time to get to the others in future stories.

If Savile is guilty of any flaws, it's that he explains too much through narration instead of allowing the reader to discover stuff along with the characters. We learn what Twig's plot is because the narrator tells us, and it feels somewhat awkward. Because it's a brand new series, and the mysteries behind Tanglewood haven't been revealed yet, the impact of Twig's plans don't have quite as muc impact as they otherwise might.

Having said that, I'm older than the series' intended audience. Younger readers may want more information up front. Regardless, it's not a huge problem, and doesn't put me off wanting to read what happens next.

The series creators have promised a new installment every six weeks, and that already feels like a long wait. I look forward to enjoying this series for a long time to come.
Read more
3 people found this helpful
Report abuse

DPW
5.0 out of 5 stars Good and creepy with lovely writing
Reviewed in the United States on 25 January 2012
Verified Purchase
In an age where far too many writers seem to think "children's literature" means simplistic writing and two dimensional characters, it's a refreshing change to read Mr. Savile's take on the age old story of a child finding a hidden doorway. But the doors lead to a complex world we sadly only get a glimpse of, where one can go just about anywhere or anywhen, but there are monstrous beings lurking in (or perhaps ARE) the shadows, beings that frankly seem to be more in control of things than the protagonists. There are no easy "click your slippers and all will be well" outs, and truthfully, this fact may unsettle very young readers as much as it delights the pre-teens and up. It makes for a story that rings true and leaves you wanting more-- but thankfully, more sequels are due soon.
Read more
3 people found this helpful
Report abuse
See all reviews
Back to top
Get to Know Us
Make Money with Us
Let Us Help You
And don't forget:
© 1996-2021, Amazon.com, Inc. or its affiliates