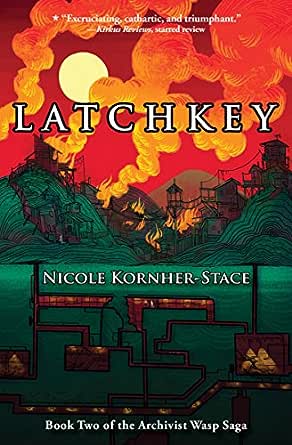 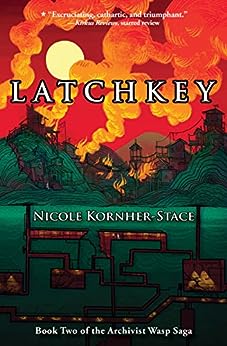 "Latchkey is explosively imaginative. This narrative shimmers with rich characters and a nuanced mythology. Weaving throughout it like a trail of ink is a heartbreaking exploration of trauma and how we engage with the scars left behind by history. Readers will leave this world feeling as if they've drawn new breath."
--Roshani Chokshi, New York Times-bestselling author of Aru Shah and the End of Time

"Latchkey peels away the layers of its past while pushing its characters into the future, offering the hope that out of the wreckage of old cruelty might come new dreams. Like a ghost caught in a loop, you'll find yourself drawn in, not to escape until it's done."
--Marie Brennan, Hugo Award-nominated author of A Natural History of Dragons

"Like Catchkeep's harvester knife, Latchkey will cut you up. ... Latchkey leaves other dystopias in the dust wallowing in More-of-the-Same. Kornher-Stace doesn't do More-of-the-Same; she's a strictly leave-her-readers-in-palpitations type of writer. Prepare to palpitate, and to read the entire novel in one go."
--Ysabeau S. Wilce, Andre Norton Award-winning author of The Flora Trilogy and Prophecies, Libels and Dreams

"Nicole Kornher-Stace's Latchkey is a completely unique and enthralling story. A blend of fantasy, paranormal and more that defies categorization, I couldn't put it down."
--Jennifer Brody, award-winning author of The 13th Continuum

"Latchkey vividly asks so many of the right questions about what memories linger after an apocalypse, for worse and for better. Surreal, beautifully rendered cross-genre action-adventure."
--Fran Wilde, Andre Norton-winning, Nebula and Hugo-nominated author of Updraft and The Bone Universe Series

"Kornher-Stace has a gift for creating atmosphere, from the familial closeness of Isabel's small community of former upstarts in the Catchkeep-temple, to the ominous claustrophobia of the tunnels beneath Sweetwater, and into the hectic chaos and turmoil of battle. And underwriting every moment is a core of kindness, of compassion--of choosing a path away from cruelty, even when it's hard: a core that makes this book, for all its darkness, somehow fundamentally uplifting."
--Liz Bourke, Locus

"What a great read! This surreal dreamscape of a book delves deeper into the unique world of the Andre Norton Award finalist Archivist Wasp."
--Beth Cato, author of Breath of Earth

"Spine-tingling ghost encounters and tension sharp as razorwire make this a sequel well worth waiting for."
--Tiffany Trent, award-winning author of The Unnaturalists

"The sequel to Nicole Kornher-Stace's Archivist Wasp is a breathless rollercoaster ride through hope, despair, narrow escapes, and a history that refuses to die, built on a bedrock theme of community and friendship. All the characters are individual, convincing, and alive--including the dead ones."
--Delia Sherman, author of The Evil Wizard Smallbone

"Wildly inventive, saturated with grit and guts and a wistful, calloused ephemerality, this is a book that lands with all the sting and palm-tingling impact of two partners joining hands before facing down impossible odds."
--Brooke Bolander, Hugo-nominated author of The Only Harmless Great Thing