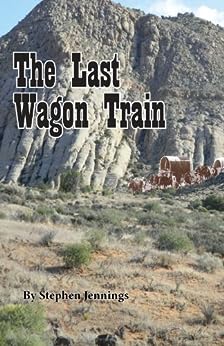 Zulu Warrior
3.0 out of 5 stars The Last Wagon Train
Reviewed in the United Kingdom on 7 June 2017
Verified Purchase
March 15th , 1897, Walter Weaver was about to go on a 2,000 mile journey to Coos Bay, Oregon, along the Oregon trail, this trip could have been done by train but Walter, his 2yrs old son Walter Junior, the Vineyards with four daughters, the widow Wilson and her 14yrs old son John, Frank Townsend with wife two boys and one girl, Nathan Bullard with a boy and girl and a young drifter Tobias set out on a seven month journey, first night they camped near some friendly Indians, there was so much warpaint and noise they moved on, Shawnee was reached but it poured with rain, they passed through and camped, they travelled next day in the rain and reached Oklahoma, there was much arguing in camp as to whom should decide on the camp sites

Mrs Townsend gave birth to a little girl, Sarah, they stayed three days for Mrs Townsend to get her strength back, Walter with his son and Tobial went ahead to Fort Supply, there is small danger with some Indians but no one is hurt, Walter carried on ahead of the train leaving a note, they passed many abandoned sod houses, with possibly more trouble with Indians they set out early, a cowboy suggested a better road and they took it, they reached the town of Liberal and brought supplies, the train finally caught up, with lack of firewood they gathered buffalo chips, they reached Lamar and Denver, Denver even had electricity, after exploring they left for Fort Collins and camped at the Platte river, Walter was becoming very close to Allie the Vineyards daughter, they headed for Laramie but it was a steep climb, each time they stopped they had to put stones behind the wheels to stop it rolling back

They reached the Oregon trail and it started to snow, Walter caught Mountain Fever and was very ill for a long time, Allie drove his wagon, at some towns the people came out of their homes with food for them, reaching Albion Allie wanted to stay, they got married, they rented a nice farm, the others continued to Oregon, although the farm was doing well Allie was pregnant and wanted to join her family in Oregon, reading on you will find out whether each family was able to live out their dreams

My verdict, being one of the last wagon trains it was no where near as interesting as the stories about the earlier pioneers, you will have to make up your own mind
Read more
Report abuse

e-bev
5.0 out of 5 stars Wow!
Reviewed in the United States on 20 July 2013
Verified Purchase
I just finished reading "The Last Wagon Train." I just started it today, and I couldn't put it down. Apparently, the author made great use of a relative's diary and turned it into a most-interesting narrative of the trip a small wagon train made after locomotives had connected the continent. I suppose that the best part of the book was that it invited me in to share the trip, but I also enjoyed knowing a bit of history regarding what happened to my new "friends" after they were settled. This book is beautifully written. I recommend it for history-lovers and romantics.
Read more
Report abuse

Kindle Customer
5.0 out of 5 stars Interesting book on late use of the Oregon Trail
Reviewed in the United States on 23 December 2019
Verified Purchase
Enjoyed the first person novel of travel across this country try to the Pacific ocean. Have fun on the trip.
Read more
Report abuse

Victoria Pitts Caine
4.0 out of 5 stars Exploring the trek of the Oregon Trail
Reviewed in the United States on 26 March 2013
Verified Purchase
This book told entirely in narrative explores the hardships and daily life of a group of travelers on the Oregon Trail. The story lets the reader share in the lives of Walter and Allie and their struggles to find their future.
Read more
One person found this helpful
Report abuse

Jackie
5.0 out of 5 stars We highly recommend The Last Wagon Train by Stephen Jennings.
Reviewed in the United States on 21 August 2013
Verified Purchase
An enjoyable read and very interesting to feel what it would have been like making such a journey. Our ancestors definitely made it easier for our lives today. This book, The Last Wagon Train would be a good example for history teachers to introduce to their students. Kids could appreciate the hardships their ancestors had made for them. Every school library should stock several copies of this book. Thank you, Stephen Jennings, Terry and Jackie Gibbs
Read more
Report abuse
See all reviews
Back to top
Get to Know Us
Make Money with Us
Let Us Help You
And don't forget:
© 1996-2021, Amazon.com, Inc. or its affiliates