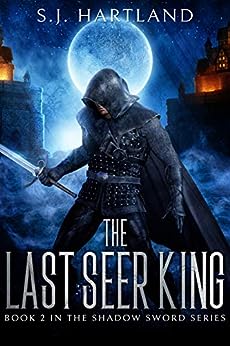 Meghan Bryant
5.0 out of 5 stars Best fantasy series! Last Seer King has everything you want
Reviewed in Australia on 11 July 2019
Verified Purchase
When I read The 19th Bladseman I found I couldn't put it down and devoured it over a day and a half. I couldn't wait for the sequel, and was hoping it was just as good... I've just finished The Last Seer King and I can say that it is definitely met (and exceeded) my expectations. Again, from the start the characters drew me in and it has everything you could want from a fantasy novel - it has loveable characters, twists and turns, magic and SJ Hartland's writing style is another form of magic with the ability to draw you into her world. Up there with the best fantasy series I've ever read. Can't wait for the next book!
Read more
One person found this helpful
Helpful
Report abuse

Chrissi
TOP 1000 REVIEWER
5.0 out of 5 stars FANFREAKINTASTIC!!
Reviewed in Australia on 11 September 2019
Wow!! This is a book that you honestly need to dedicate time to. You will not want to rush and risk missing a single glorious word.
There are old faces from book one, and a few new faces introduced in this book. The storyline weaves a tapestry filled will pain, betrayal, surprises, secrets, suspense, torture all of which will have you holding your breath while you silently pray that your favourite character survives til the next page. I am eagerly awaiting book 3..... hurry up 2020!!
Read more
One person found this helpful
Helpful
Report abuse
See all reviews

Cheryl from uk
5.0 out of 5 stars Amazing
Reviewed in the United Kingdom on 19 July 2019
Verified Purchase
Can't believe I have to wait till 2020 to read the next book, was bad enough waiting for this one
Read more
Report abuse

NHead
5.0 out of 5 stars Brilliant read
Reviewed in the United Kingdom on 10 November 2020
Verified Purchase
I loved this book as much as the first in the series especially as you learnt more of the characters individual stories. Loads of twists and turns. I can’t wait to read the next instalment
Read more
Report abuse

Joyce
4.0 out of 5 stars suspenseful and thrilling
Reviewed in the United States on 23 July 2019
Verified Purchase
The Last Seer King is a fantasy, sprinkled with a little bit of thrill and romantic suspense. It is written from multiple points of view. The book is about how noble, samurai-like characters try their best to restore peace in the lands. As they do this, they not only sacrifice a lot but also reveal dark secrets. The characters try their very best but everything comes at a hefty price. I will stop there to avoid spoiling it!

The book is thrilling, suspenseful and also has a bit of romance. Fantasy fans would love it. The plot is built with sorcery and dark magic. I really liked how the author excelled at character development. Even though I had not read the first book of the series, I was able to jump in and continue with the story without finding anything amiss. Kaell was one of my favorite characters.

The Last Seer King had very nice imagery that perfectly fitted the different scenes. S.J. Hartland, the author, detailed each scene, etching it into the reader’s mind. It was very well done and this made the story abundantly clear

In all honesty, what absolutely captured my attention was how the author was able to narrate the story in multiple points of view. The author did it perfectly. From my experience, not many writers can pull that off

There was very good character growth.

The book also had very nice pacing. The writer was able to blend in the high tension areas with the areas where the story 'plateaued.’

And now for the cons. First, I really hate it when I read a book and I’m not informed of the backstory. That is how I felt while I was reading this book, especially in the beginning.

Personally, I think that even though the books are in the same series, each should be understandable on its own (as a stand-alone). Some story-lines were relating to the first book and this had me confused most parts of the book. This was also displeasing because it forced me to struggle in understanding the backstory of some characters.

In conclusion, I think that this book had full development of ideas. It is both suspenseful and thrilling. However, I would have enjoyed it more if fewer parts were dependent on the first book.

I give the book 4 stars, mainly because it was very original. I could not guess what was going to happen next as I read the book. I’m sure I could have given it a solid 5 stars if I had read the first book before this one.

I got a free copy of this book in return for an honest review.
This is the official review of Review Saint.
Read more
Report abuse

Kindle Customer
5.0 out of 5 stars Ok I'm hooked!!
Reviewed in the United States on 2 November 2020
Verified Purchase
Wow!!! This book has more twist an turns than a rollercoaster. Myranthe is the meanest an most cunning witch I have ever read about. I wanted to pick up a sword an have at her. Book 2 gives you a better insight on all the main characters. The writer really dug deep to bring them out. Roarn the dead king uses an manipulates the people around to save a kingdom. So he says??? Now Val an Kaell think there safe an can build back a better relationship. Yeah right, the dead king has other ideas.
All in all the writer did a damn fine job in Book 2 bring the characters out in the open. Giving the read a better idea where the story is heading. Book 2 is a smoother read then Book 1. A must read!!
Read more
Report abuse

john
4.0 out of 5 stars COMPLEX
Reviewed in the United States on 11 October 2019
Verified Purchase
Well written with excellent plot development. If you like complex stories this is for you. 5 more words required here.
Read more
Report abuse
See all reviews
Back to top
Get to Know Us
Make Money with Us
Let Us Help You
And don't forget:
© 1996-2021, Amazon.com, Inc. or its affiliates