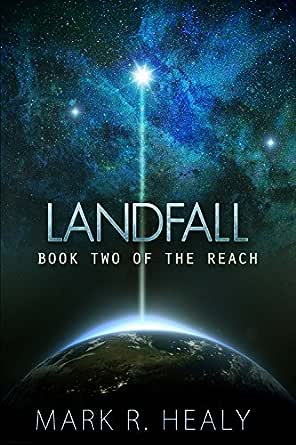 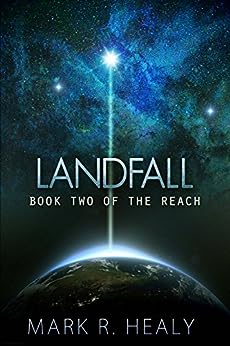 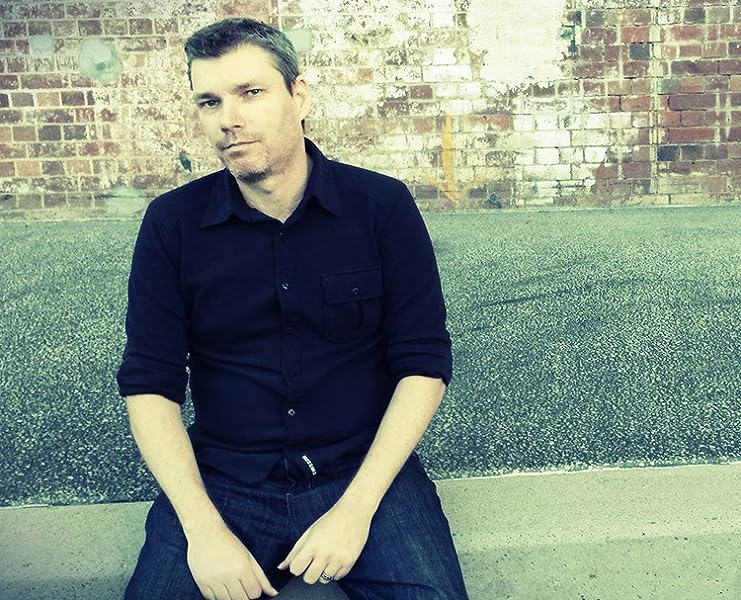 C. B.
4.0 out of 5 stars The Tower of Babel and Knile Oberend
Reviewed in Australia on 17 November 2015
Verified Purchase
The Reach is a giant transit hub and skyscraper with the only remaining space elevator ("The Wire") connected to an orbiting space port. Escape from the ruined Earth is only for the rich or lucky few sponsored for emigration off planet to one of the distant space colonies via The Wire. Who leaves Earth and gains access to the Reach and the Wire is decided by corporate interests in The Consortium.

Book 2, Landfall, picks up where Book 1, The Reach, terminates its story with Knile returning to a ruined and polluted Earth to rescue his friends on terra firma, his proxy "family", from the malice of the rich, corrupted law enforcement, underworld figures, and inescapable toxins in the environment slowly killing anyone remaining on Earth.

A sequel to a sci-fi novel can be dangerous ground for an author. Often the follow-up story is either merely an unbroken continuation of the previous plot "to the letter" (See Jack Campbell's "Lost Fleet" series), or an insipid attempt to keep alive the inspiration and story that ended in the first book. Landfall, by Mark R. Healy, is neither of these things, but a rewarding sequel expanding its plot and characters for readers hungry for more after Book 1.

What separates Landfall from its prequel is an author growing in capacity and skill as he hones his writing into richer prose and skillfully connected expositions. The reader is drawn into the story through several intriguing sub-plots and developed lesser characters tied to Knile and Book 1's plot and foreshadowing.

Landfall is in some aspects a better novel than its (very good) predecessor The Reach, which leaves the reader with a growing sense of anticipation and excitement as to how the protagonists and antagonists we have come to love or hate will end their story arc in the next sequel. Mark R. Healy continues to wet the reader's appetite with The Reach, and now Landfall, leaving no doubt Book 3 will culminate in a story apex sure to please.

Mr. P. D. Selman
5.0 out of 5 stars We're cookin' now!
Reviewed in the United Kingdom on 5 July 2016
Verified Purchase
As much as I enjoyed the first book in this series, I loved book two even more. I really got the feeling that the author sat down at his writing desk, cracked his knuckles and thought 'So, you liked book one, eh? Well, wait'll you get a load of this!’

Landfall flicks the nitro switch and burns through the reader's brain with the soundtrack turned up to eleven. I loved every minute of this book. My favourite characters from book one are back, including a couple I honestly didn't think I'd see again, and there's a bunch of engaging new characters to keep them company. We delve deeper into the world of the Reach and it really is becoming a rich tapestry of a society... Not one I'd care to live in, of course, but it's a Hell of a lot of fun to visit!

This really is shaping up into a great science fiction series. If you're a fan of action-packed dystopian worlds, you really could do a heck of a lot worse than to check this series out. I'm diving straight into book three; see you on the flip side...
Read more
Report abuse

Allan Donnachie
4.0 out of 5 stars Four Stars
Reviewed in the United Kingdom on 17 October 2015
Verified Purchase
Well written and just as good as the first chapter.
Read more
Report abuse

Kindle Customer
5.0 out of 5 stars Great read
Reviewed in the United States on 31 October 2016
Verified Purchase
A great way to pass an afternoon totally engrossed in this book. The characters are very real and believable and has a very coherent plot
Read more
Report abuse

Amazon Customer
4.0 out of 5 stars Book 2
Reviewed in the United States on 26 April 2017
Verified Purchase
It completely left book 1 behind. It was a harder read and too many people that really did not all come together till the end of the book.
Read more
Report abuse

Kindle Customer
5.0 out of 5 stars Can't put it down!!
Reviewed in the United States on 14 May 2016
Verified Purchase
Definitely engaging, lots of great twists. Great series!!
Read more
Report abuse
See all reviews
Get FREE delivery with Amazon Prime
Prime members enjoy FREE Delivery and exclusive access to movies, TV shows, music, Kindle e-books, Twitch Prime, and more.
> Get Started
Back to top
Get to Know Us
Make Money with Us
Let Us Help You
And don't forget:
© 1996-2020, Amazon.com, Inc. or its affiliates