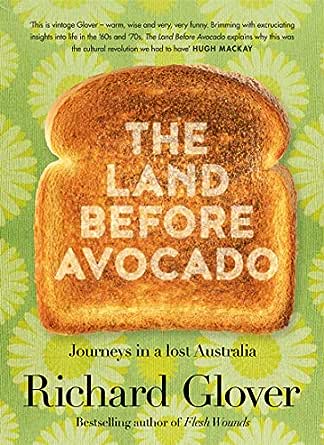 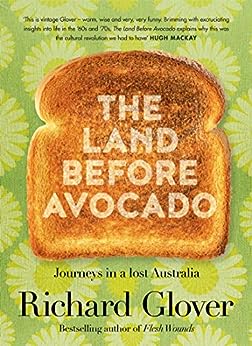 The Land Before Avocado Kindle Edition

'This is vintage Glover – warm, wise and very, very funny. Brimming with excruciating insights into life in the late sixties and early seventies, The Land Before Avocado explains why this was the cultural revolution we had to have.' -- Hugh Mackay

'Hilarious and horrifying, this is the ultimate intergenerational conversation starter.' -- Annabel Crabb

The new book from the bestselling author of Flesh Wounds. A funny and frank look at the way Australia used to be – and just how far we have come.
See all Product description

Sue Maynes
TOP 500 REVIEWER
3.0 out of 5 stars Too expensive for what I got
3 November 2018
Format: Kindle EditionVerified Purchase
I bought this book based on the blurb. It sounded great. It was okay but it was not worth the kindle price.

The reviews describe it as 'Hilarious, laugh-till-you-weep stories, very entertaining' - I don't agree. I didn't weep with laughter, nor did I find anything hilarious.

It did bring back memories of the Australia I knew as a child - but the overall tone of the book was to denigrate 'then' and 'laud' now. At one stage the book discusses the Australian Cultural Cringe, then makes that cringe alive and well in the author's current perspective of our history.

I was disappointed and basically feel I wasted my money.

Kindle Customer
4.0 out of 5 stars Opinions
4 November 2018
Format: Kindle EditionVerified Purchase
The book certainly covered the 60s a 70s well and it was an enjoyable read and memoir of how things were back then. However, I do have one complaint and this was the way Richard maligned the writer van danikin. He has no right to cal the man a thief and fraud. I challenge Richard to visit some of those huge monuments in South America and then try to agree that the natives cut such large stones. Some of the stones are too big to be lifted even now. Van Danikin never said the aliens built these huge megalithic, he just suggested that maybe another earlier civilisation built the..
Read more
4 people found this helpful
Helpful
Comment Report abuse

Ken Hungerford
3.0 out of 5 stars Not worth the money
1 April 2019
Format: Kindle EditionVerified Purchase
Depending on whether you interpret this book as a serious look at the merits of today versus yesterday or as a light hearted look determines how you view Richard's viewpoint. Personally I bought it because I thought it would be a serious examination rather than the rather shallow approach he has taken. I guess my opinion is somewhat coloured by my lack of enthusiasm for the writer. The book is made worse by the various errors used to make points. I would not recommend it and feel I have wasted money on it.
Read more
One person found this helpful
Helpful
Comment Report abuse

Lemursss
5.0 out of 5 stars I was there
19 January 2019
Format: Kindle EditionVerified Purchase
I arrived in Australia in 1973 and was in cultural shock. The only benefit was that it was warmer (apart from winter) than Canada. In winter Canberra housing was the new Siberia-no house insulation, constant drafts, pultry heating, and bureaucratic speak that defied logic. Glover didn’t list half of the inadequacies of a Canberra view of Australia. Other parts of the world, meaning the rest of Australia, were worse.
Read more
Helpful
Comment Report abuse

Inara Taylor
5.0 out of 5 stars This book is a commentary .
8 January 2019
Format: Kindle EditionVerified Purchase
Anyone who grew up in Australia through the 50's60's and 70's will relish taking a walk through those days once more.Some things may not have been important to you personally at the time,depending on age.A lot of good things have happened,but by the same token some some previously good things have been lost.I certainly found this book engaging ,interesting and at times funny.
Read more
Helpful
Comment Report abuse

Nannette Catmur
5.0 out of 5 stars Was it the good old days?
22 November 2018
Format: Kindle EditionVerified Purchase
Being of an age that grew up in these times, so many memories, smiles, laughs out loud & tears. Richard really hits the nail on the head. All times are good for those living in them. I am glad I survived the 60's and 70's.... And look ahead to the future. A great read! Thanks Richard.
Read more
Helpful
Comment Report abuse

Kindle Customer
4.0 out of 5 stars Hilarious and true look at my youth
14 September 2019
Format: Kindle EditionVerified Purchase
What a funny, eye opening books. I grew up in the Australia of the 70s and 80s, and remember fondly so much of what Richard mentions. Luckily, I'm southern European, so we always had good food, at least! A really fun read.
Read more
Helpful
Comment Report abuse

Alex Wardrop
4.0 out of 5 stars Reviving memories
14 January 2019
Format: Kindle EditionVerified Purchase
Richard Glover brought back memories of my own childhood, albeit a slightly earlier one than his. Thus, the Vietnam War impinged on my school and uni days, as did the old way in which elections were run. However, I can so relate to family trips and holidays. Also, what a treat eating out on roast chook was
Read more
Helpful
Comment Report abuse
There are 27 customer reviews and 30 customer ratings.
See all 27 customer reviews
Write a customer review

Go to Amazon.com to see all 9 reviews 4.3 out of 5 stars
Get FREE delivery with Amazon Prime
Prime members enjoy FREE Delivery and exclusive access to movies, TV shows, music, Kindle e-books, Twitch Prime, and more.
> Get Started
Back to top
Get to Know Us
Make Money with Us
Let Us Help You
And don't forget:
© 1996-2020, Amazon.com, Inc. or its affiliates