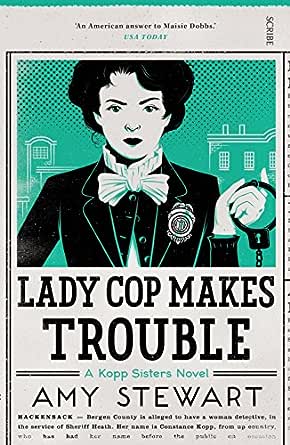 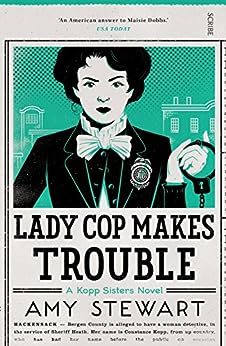 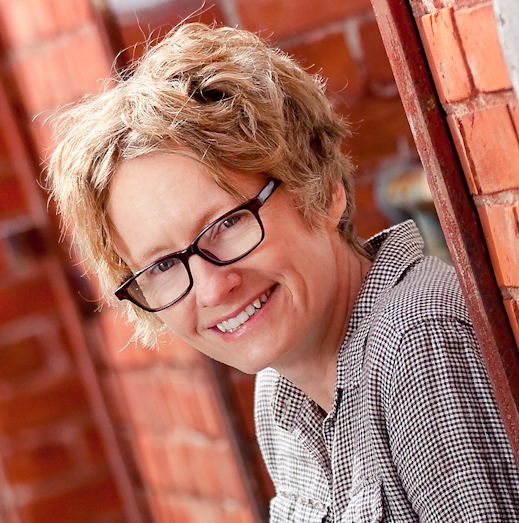 The best-selling author of Girl Waits with Gun returns with another adventure featuring the fascinating, feisty, and unforgettable Kopp sisters. --This text refers to the paperback edition.

"LADY COP MAKES TROUBLE takes readers on a lively chase through a lost world. It's a colorful and inventive adventure tale that also contains a serious message at its core about the importance of meaningful work to women's identities and, in some cases, survival." - Maureen Corrigan, Washington Post

"Whether Constance is tackling a criminal 'in what had to be the most undignified position a woman had ever been seen in on the streets of Brooklyn' or pouring punch in a theater lobby for Fleurette's Christmas pageant, her days and nights come vividly to life. And although the real crimes are solved by the end of the novel, Stewart leaves the reader wondering about one mystery still developing unsolved: the relationship between Constance and her married boss, Heath...Readers will just have to wait -- impatiently, no doubt -- for book No. 3." - Boston Globe

"Constance and her sisters are every bit as enjoyable in this outing as their first. Stewart deftly combines the rough-and-tumble atmosphere of early 20th-century New York City with the story of three women who want to live life on their own terms. The addition of supporting female characters who are also pushing societal boundaries is a welcome touch to the series." - Library Journal, starred review

"In the long-awaited sequel to Girl Waits With Gun, Constance has to take matters into her own hands. Lady Cop Makes Trouble, based on actual events, is another irresistible madcap adventure featuring the Kopp sisters." - PopSugar

"Amy Stewart (Girl Waits with Gun) continues the fictional adventures of Miss Constance Kopp in LADY COP MAKES TROUBLE. Constance is based on a real woman who, just prior to World War I, became a deputy sheriff in New Jersey, one of the first of her kind in the country. And yes, she does make trouble. Escaped convicts don't stand a chance against this adventurous woman, as Stewart crafts a heady brew of mystery and action in a fast-moving, craftily written novel that's fueled by actual news headlines of the day." - BookPage

"It's 'True Grit, ' New York style. Stewart ("Girl Waits With Gun") delivers the second novel in her series based on the real-life antics of Constance Kopp, one of the few female deputy sheriffs who lived 100 years ago. With encouragement from her two sisters, Constance tracks a German con man through the streets of the Big Apple. The book's title is inspired by several actual newspaper headlines of the time about the small number of women who worked in law enforcement." - New York Post

"Constance Kopp is one of the most fascinating characters in recent mystery fiction. The fact that Stewart bases her on a real person and uses real events in her plots make Constance even more fascinating....Lady Cop Makes Trouble is one of the best mystery novels of the year: wonderful and very entertaining characters based on meticulous research, understated humor, and an accurate snapshot of the times just prior to America's entry in WWI. One could hunt for a downside to Amy Stewart's series, but it would be a vain search. Kudos to Amy Stewart and Constance Kopp. May there be many more sequels to follow." - New York Journal of Books

"The second entry in Amy Stewart's historical mystery series based on the real-life Kopp sisters is as compulsively readable and effortlessly enjoyable as the first....Stewart expertly plays imagination and research off of one another in a way that is a pleasure in itself...So bring on more of the Kopp sisters! I can't wait to see what they get up to next." - Emerald City Book Review

"Girl Waits With Gun by Amy Stewart was one of the most enjoyable literary surprises of 2015, and the sequel, Lady Cop Makes Trouble (Houghton Mifflin Harcourt), pursues its clever premise. Based on the real-life Kopp sisters of Bergen County, New Jersey - and the career of Constance Kopp, one of America's first female deputy sheriffs, in particular - this adventure finds Constance's deputy sheriff status at stake when she tricked by a nefarious con man. The multiple crimes that Stewart weaves into her tale are one thing, but equally compelling are the lovingly rendered characters, including a shining cameo by William Carlos Williams." - Seattle Review of Books

"The multiple players in the story provide wry situational humor and a backdrop for Kopp's unique, forceful character, while Sheriff Heath's surprisingly supportive regard lends a hopeful relational perspective. Stewart adeptly introduces details of early twentieth-century life in Hackensack, New Jersey, a burgeoning city on the outskirts of New York, and timely concerns such as jail reform and women's rights, rounding out this immensely satisfying mystery." - Booklist

"In this comic mystery set in 1915 and based on actual events, Constance Kopp, the first female deputy sheriff in Bergen County, N.J., is still packing a pistol and an attitude after her first crime-fighting adventures in Girl Waits with Gun. Stewart's second volume in her Kopp Sisters Series is a clever, suspenseful, and funny tale of a formidable woman facing crime, politics, social stigma, all while nailing evildoers....Fans of the first Kopp Sisters novel will find another treat in this follow-up. " - Publishers Weekly


--This text refers to the hardcover edition.

The best-selling author of Girl Waits with Gun returns with another adventure featuring the feisty, unforgettable Kopp Sisters.

Praise for the Kopp Sisters Novels
“An entertaining and enlightening story of how far one woman will go to protect her family.”
—Washington Post

“Zippy, winsome .º.º. [A] cinematic story of the [Kopps], the siege instigated by their powerful enemy, and their brave efforts in the face of real violence.”
—Los Angeles Times

“Stewart gives us three sisters whose bond—scratchy and well-worn but stronger for it—is unspoken but effortless.”
—NPR

“A smart, romping adventure, featuring some of the most memorable and powerful female characters I’ve seen in print for a long time. I loved every page as I followed the Kopp sisters through a too-good-to-be-true (but mostly true!) tale of violence, courage, stubbornness, and resourcefulness.”
—Elizabeth Gilbert
--This text refers to the hardcover edition.

AMY STEWART is the award-winning author of seven books, including her acclaimed fiction debut Girl Waits with Gun and the bestsellers The Drunken Botanist and Wicked Plants. She and her husband live in Eureka, California, where they own a bookstore called Eureka Books.
&#160;
--This text refers to the hardcover edition.

In 1915, lady cops were not expected to chase down fugitives on the streets of New York City. But Constance Kopp never did what anyone expected.

Constance Kopp is six feet tall, lives on a quiet farm with her two sisters, and yearns for fulfilling work. The Kopp sisters, though, aren’t going to be living the quiet life anymore. They made the news fighting back against a ruthless silk factory owner and his gang of thugs. And after Bergen County’s Sheriff Heath sees Constance in action, he appoints her as one of the nation’s first female deputies. He knows she’s a powerful addition to his force, and she knows she can do the job, but when the wiles of a German-speaking con man threaten her position and her hopes for this new life—and risk the honorable sheriff being thrown in his own jail—Constance is forced to prove herself again.

Lady Cop Makes Trouble sets Constance loose on the streets of New York City and New Jersey. Even as she tracks her fugitive, she’s also tested by other cases—helping runaway girls taken in by unscrupulous men and sorting out why an old woman is taking the fall for a murder she couldn’t have committed. Cheering her on are her sisters Norma and Fleurette—that is, when they aren’t, respectively, training pigeons for the war effort or fanning dreams of a life on the stage.

Based on the Kopp sisters’ real-life adventures, Girl Waits with Gun introduced the sensational lives of Constance Kopp and her unconventional sisters to an army of enthusiastic readers. This second installment, also ripped from the headlines, takes us further into the romping, riveting story of a woman who defied expectations, forged her own path, and tackled crime—and nefarious criminals!—along the way.