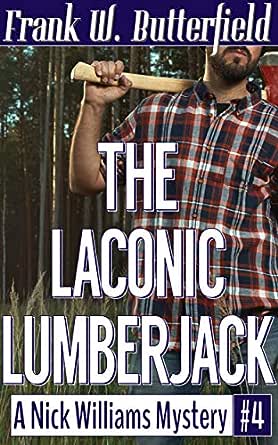 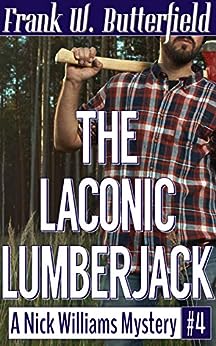 It's just another Thursday morning in July of 1953 when the doorbell rings at 137 Hartford Street and it's bad news.

Carter's father has been murdered in Georgia and the local sheriff has no intention of finding out who really did it.

So, Nick and Carter borrow the first plane that Marnie, Nick's amazing secretary, can find for them and they zoom off back into the past to see if they can uncover the truth of what really happened before the wrong man is convicted. And, knowing the lay of the land under the moss-covered oaks, Carter is pretty sure that the color of a man's skin will figure heavily in who takes the fall.

In The Laconic Lumberjack, the best Nick can do is stand by Carter's side as he confronts an awful past, uncovers some surprising secrets, and deals with the unsavory reality of small-town hypocrisy.

In the end, Nick and Carter discover more about themselves than they ever expected to find.

Presented as the richest gay man in the world, Nick Williams is the rainbow Batman. Butterfield has taken care to capture the lingo, the material settings, and the overall atmosphere of 1950s America. A great deal of it is not pretty. Gay folk were people who lived in shadows, self-assigned to closets and clubs where only special members were admitted. To be honest, there were probably very rich gay men in 1950s America, and I suspect that most of them were both deeply closeted and worked to support the forces of anti-gay suppression. Money historically trumps self-identity. Self-preservation quashes generosity of spirit.

That’s why Nick Williams is a superhero; he is a fictional fantasy of what each of us would love to do if only we had the money. Putting Nick and his vast fortune in the post-McCarthy fifties just makes it all the more fantastic. Nick is neither lonely nor afraid. He loves Carter Woodrow Wilson Jones, and refers to him as his husband long before anyone of his generation dared to utter that word. But my husband and I had an uncle who found love with another man in California in the 1950s, so we know it was possible.

In this book, Butterfield has let us confront something we’ve only heard about tangentially: Carter’s past. His nasty, bigoted father is murdered, and so our boys have to fly to Albany, Georgia, to see what they can do, and to confront Carter’s unhappy childhood (and his unhappy mama). Of course, being Nick, they charter a Lockheed Constellation, which happens to belong to Howard Hughes. So we get up close and personal with the ugly side of the Old South – racism and homophobia and corruption of justice. And yet, we also get to know another truth that existed then (as it exists now in places like North Carolina), that there were not only gay folks who survived and thrived in the South, but straight people who loved and protected them. Butterfield is careful to create a world that isn’t Mordor versus the Shire, but a world that seems plausible in its good and in its evil.

I’m so old, I don’t want to fly or be invisible any more. (I’m tired of being invisible.) I wish I was a billionaire, so that I could counter the selfish and damaging behavior of people like Donald Trump and Peter Thiel. I wish I could rent airplanes and bankroll abused gay kids’ college educations. Nick uses his money for good, and seems to have a magical ability to turn dross into gold. That’s my wished-for super power.
Keep ‘em coming, Mr. Butterfield. 2016 was a dark year for democracy in America. Nick Williams is a superhero for the coming times.

silvia
5.0 out of 5 stars The best book so far
14 July 2019 - Published on Amazon.com
Verified Purchase
This series is so amazing. Although I usually love being transported back in time in this series, this book was unsettling. I’m talking the outright blatant racism and bigotry really jumped out. The terminology used in every day life back then without even batting an eye made me so uncomfortable. I’m grateful the author didn’t ignore this dark and shameful time as it was essential to Carter’s story and where he came from.

Now back to the good stuff, Nick and Carter and their inner circle. This is a great group of people, not to mention the wonderful new people we meet in this book. The love and support they all show and have for each other is what keeps me turning the pages. The world building is excellent and the characters are layered with depth. The more that is revealed, the more I want to get to know. As for Nick and Carter, they are just the most loving couple. Their relationship makes my heart thump like crazy. I love that their intimate relationship is left mainly to the imagination. Maybe we’ll get more in the later books but it isn’t necessary. Makes me tear up EVERY time Nick tells Carter they’re husbands. Makes my heart melt. Makes me want to give this book 5 stars and makes me want start the next one right now!
Read more
One person found this helpful

David P Tangredi
5.0 out of 5 stars The best one yet...
1 January 2017 - Published on Amazon.com
Verified Purchase
The Laconic Lumberjack is my favorite in the series thus far. (I’ve read 5 mysteries, plus the prequels.) Each book has something it does really well. This book has all of those things…plus some more. At the end of one particular chapter, I yelped with glee, having been caught by surprise and thoroughly tickled by what transpired. And that wasn’t the only time.

The book is not all giggles cause it reaches into some serious stuff, but then again, life is like that...ain't it? And while it fits right in with the series, it's not simply more of the same. Many of the characters are familiar, but we keep learning more and more about them. And they are evolving.

I think it's definitely worth diving into!
Read more
One person found this helpful

Ike Rose
5.0 out of 5 stars Historic fiction at it's best.
30 September 2017 - Published on Amazon.com
Verified Purchase
I am now a firm fan of the Nick and Carter series.
I have been wonderung as I read the books how some of the less fortunate victims of the Lavender Scare dealt with the constant harassment, but even someone as well placed as Nick had his trials.
Read more
One person found this helpful

Greg Parker
5.0 out of 5 stars Five Stars
3 May 2017 - Published on Amazon.com
Verified Purchase
I'm just going to say that I love this series and always impatiently wait for the next installment.
Read more
One person found this helpful
Go to Amazon.com to see all 17 reviews 4.7 out of 5 stars
Get FREE delivery with Amazon Prime
Prime members enjoy FREE Delivery and exclusive access to movies, TV shows, music, Kindle e-books, Twitch Prime, and more.
> Get Started
Back to top
Get to Know Us
Make Money with Us
Let Us Help You
And don't forget:
© 1996-2020, Amazon.com, Inc. or its affiliates