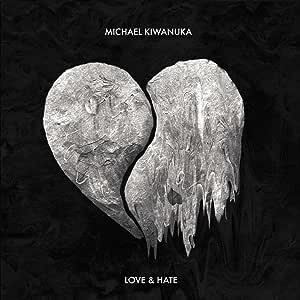 Michael Kiwanuka's second album Love & Hate was recorded in LA and London produced by Grammy Award winner Dangermouse and young up-and-coming producer Inflo. Love & Hate is a fascinatingly assured and resonant body of work following Kiwanuka's acclaimed 2012 debut LP, Home Again. Honest, unabashed, and ambitious, this new record is Kiwanuka emerging from the emotional cocoon of his first album, ready to secure his position as one of the most exciting and renowned talents or our time.

4.7 out of 5 stars
4.7 out of 5
1,573 global ratings
How are ratings calculated?
To calculate the overall star rating and percentage breakdown by star, we don’t use a simple average. Instead, our system considers things like how recent a review is and if the reviewer bought the item on Amazon. It also analyses reviews to verify trustworthiness.

Insanejames
1.0 out of 5 stars Disappointing
Reviewed in Australia on 22 October 2020
Verified Purchase
Firstly, my CD has that awful loudness/limiting technique which totally ruins any of the dynamics of the music. Secondly, after hearing rave reviews about this guy, I have to say I cannot understand what all the fuss is about. Second rate Marvin Gaye at best. Matter of fact give me Whats Goin' On any day. Once again a huge disappointment.
Read more
Helpful
Comment Report abuse

RayZor
5.0 out of 5 stars Fantastic Album
Reviewed in Australia on 29 August 2019
Verified Purchase
Really enjoyed this album, will get a lot of plays. Can't recommend it enough.
Read more
Helpful
Comment Report abuse
See all reviews

Maya
5.0 out of 5 stars A rare musical talent
Reviewed in the United Kingdom on 21 October 2017
Verified Purchase
This was a gift to an old man whom had heard the song "Cold Little Heart" in radio. I have heard the studio version on Youtube, and it seems to be a better and more fulfilling recorded version. I wish the studio version with its more intense energy had been on this album. I still give it 5 stars because Mr. Kiwanuka is such a special musical talent that we rarely see these days and all the songs are easy to like. Thanks to the old man for making me buy this gift to him and letting me hear this true artist.
Read more
14 people found this helpful
Report abuse

crackedactor
4.0 out of 5 stars Great album I didn't even know about...
Reviewed in the United Kingdom on 12 June 2020
Verified Purchase
I must admit, I only came to this man's music recently. I bought his album with 'You ain't the problem' and 'Hero' on it. This is the album before that one and in its own way, is every bit as good. There is something so natural about his style. Sure, you've heard it before, it has a late 60s early 70s soul vibe to it not unlike Bill Withers and Curtis Mayfield, but the impression created is that this is an artist with a lot of heart as well as soul. I now want to get his first album. It's not often I want to check out an artist in such depth.
Read more
5 people found this helpful
Report abuse

J. R. Simpson
4.0 out of 5 stars Thanks BBC!
Reviewed in the United Kingdom on 7 March 2018
Verified Purchase
Good album and well worth a listen. I was attracted to the album by BBC's use of Love & Hate in the ad for the Love & Hate Crime documentary series. Cold Little Heart, Falling and Love & Hate are the standout tracks. The guitar work in Cold Little Heart is outstanding, Floyd-esque.
The album has a great feel to it, is well produced (Dangermouse - check out the album "Rome") and MK has a great voice (Falling). The only duff track is track 2, which feels like a filler and is out of context with the rest of the album but I'm being picky here!

K. G. Jeffs
5.0 out of 5 stars Awesome album
Reviewed in the United Kingdom on 25 November 2019
Verified Purchase
Awesome album, but production isn’t top notch. The vinyl sounds muffled in parts until I listened to the downloaded version and heard the same. I guess it’s part of the artists style to record that way, but unless you know, it sounds like a bad recording in places. But, the music speaks for itself. As a huge fan of old soul and funk, it’s refreshing to have a current artist mining the influential artists of the past such as Marvin Gaye, but bringing a contemporary freshness to it.
Read more
3 people found this helpful
Report abuse

Tom H
5.0 out of 5 stars Chilled out music
Reviewed in the United Kingdom on 13 April 2017
Verified Purchase
I bought this as it had the theme music from big little liars, and was pleasantly surprised by the whole range of songs featured on the cd. Brilliant for playing in your car on long journeys.
Read more
14 people found this helpful
Report abuse
See all reviews
Get FREE delivery with Amazon Prime
Prime members enjoy FREE Delivery and exclusive access to movies, TV shows, music, Kindle e-books, Twitch Prime, and more.
> Get Started
Back to top
Get to Know Us
Make Money with Us
Let Us Help You
And don't forget:
© 1996-2020, Amazon.com, Inc. or its affiliates