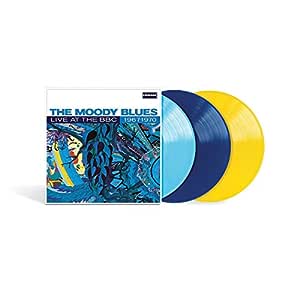 41 live recordings of various performances for the BBC by the British rock band between 1967 and 1970.

Dante
4.0 out of 5 stars ...pure bliss.
24 April 2018 - Published on Amazon.com
Verified Purchase
Nice recording from a great period in Moodies history. The sound is not too bad given the limitations of recording in the time period. There are a number of songs repeated on this outing, something that I didn't mind so much. The oldest songs here are almost non-Moody Blues compared to the more recent recordings. Again I don't mind this fact. The band includes the Animals' "Don't Let Me Be Misunderstood" surprising but cool. There are the classic songs like "Knights in White Satin", "Dr. Livingston, I Presume", "Voices in the Sky" and "Lovely to See You". But I find all the songs on this album to be classics, I dearly love the Moodies. The two discs have a lengthy number of songs, pure bliss.
Read more
5 people found this helpful

Heather Dillon
5.0 out of 5 stars Must have for fans.
21 May 2018 - Published on Amazon.com
Verified Purchase
Pretty bright sounding, but that's BBC radio stuff for ya. With a little filtering it sounds great.

Fantastic material from one of the greatest bands ever. A must have for fans who have bought a few studio albums or more. You'll enjoy this package.

Nice photos. Wish it were on some nice vinyl and trim some superfluous numbers, as I'd snap it up in a second. Could make for a nice triplet set perhaps. LP 3 could start with Gypsy and be that little show there. It'd be great. :-) <3

Anyway.. glad I bought this. I'm enjoying it all over again. :)

Lee Roschen
5.0 out of 5 stars Odd and bewildering mix, but a must have for Moodies fans....
15 February 2009 - Published on Amazon.com
Verified Purchase
Here comes another rather obscure musical offering from the legendary british band, with most of the tracks coming from their albums "Days of Future Passed", "In Search Of The Lost Chord", and "On Threshold Of A Dream". First off, of the songs included here from those three incredible albums, all have been treated with mixing variations vocally and instrumentally (outtakes), and they are very fascinating for the Moodies fan to appreciate. Secondly, the title of this double CD, "Live at the BBC" is somewhat misleading, as only several tracks on disc #2 are actually performed "in concert", have an audience applauding at the beginning and end of a song, and they were duplicated on the Moodies previously released live album "Caught Live +5" from 1977. Thirdly, no less than nine song titles have duplicate versions on this double CD; there are two different versions of "Fly Me High", "Lovely To See You", "Peak Hour", "The Best Way To Travel", and "Never Comes The Day". Even more strange are an incredible three different versions of "Dr. Livingstone, I Presume", "Voices In The Sky", "Ride My See Saw", and the classic "Nights In White Satin". Fourthly, a couple of tracks are introduced deejay style. Fifthly, the Moody Blues version of a hit originally recorded by Eric Burdon & The Animals, "Don't Let Me Be Misunderstood", makes its CD debut in this collection with Justin Hayward on lead vocal. And last, but certainly most bizarre is that "Visions Of Paradise" and "The Actor" are for some strange reason abruptly edited (1:13 and 1:49 in length respectively) compared to their original album counterparts. The many different mixing variations of these Moodies classics is truly the highlight here, and will certainly be pleasing for their many fans. That aspect alone makes this double CD worth purchasing for their collection. An odd and bewildering mix indeed, but it's fantastic stuff, and very nostalgic taking us all back to a simpler time! Any Moody Blues devotee will truly LOVE and APPRECIATE fabulous set!

Now how about nominating The Moody Blues for induction into the Rock & Roll Hall of Fame???
Read more
15 people found this helpful

Don Edward Cook
5.0 out of 5 stars Ride this live see-saw of an album by The Moody Blues!
3 March 2013 - Published on Amazon.com
Verified Purchase
The Moody Blues recorded many tracks live for airings on BBC Radio and TV -- and you may be thankful that these tracks were recorded for world posterity and your pop-cultural consumption. These BBC Radio-broadcast live tracks from 1967-1970 are wowie-zowie tunes that give the original versions of these Moody Blues tracks a whole new dimension beyond that which is known to today's younger people. Too numerous to mention, this multitude of kick-keester songs by the Moodys are worth listening to more times over than your natural life will allow for! Order hand in hand, and hear these tune so grand -- beyond the threshold of your wildest dreams!
Read more
6 people found this helpful

Valnastar
5.0 out of 5 stars An excellent and eclectic mix of early Moody Blues live at the BBC
15 June 2019 - Published on Amazon.com
Verified Purchase
Great track selection including a rare cover of Don't Let Me Be Misunderstood. Several tracks from Days Of Future Passed including a great version of Twilight Time plus the usual hits. Forty-one tracks makes it a must-own collection for Moodies fans.
Read more
Go to Amazon.com to see all 36 reviews 4.3 out of 5 stars