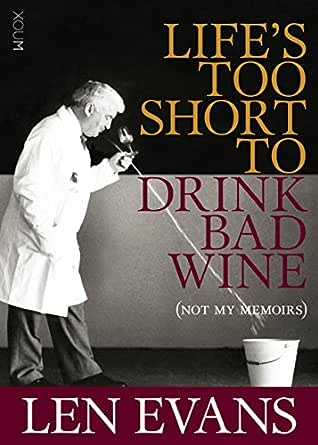 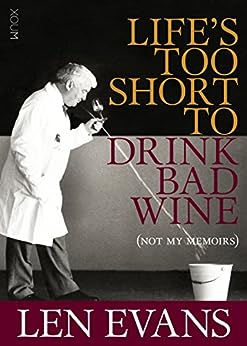 LIFE'S TOO SHORT TO DRINK BAD WINE: (Not My Memoirs) Kindle Edition

‘Wine is a good, familiar creature and once bitten, that’s it.’ Len Evans

Len Evans was bitten early and that was it. He remained an enthusiastically successful promoter of the ‘good, familiar creature’ until his untimely death in 2006. But after almost half a century of a life in wine, he wasn’t keen on getting into the autobiography business. ‘I was asked to write my memoirs,’ he said in 1985, ‘but I didn’t like the idea – for one reason I’m still living them, and for another, my many conceits do not include a belief that my life has been particularly fascinating.’

Well, he didn’t write his memoirs but he left us something else that is uniquely Evans – an anecdotal ramble through a life devoted to the production, promotion – and drinking! – of wine. There are occasional detours to paint a picture of an old mate, tell a wise or hilarious wine tale, or just spin a good yarn.

And there was many a yarn garnered in the new Welsh migrant’s progress from ring-barking trees in the bush to washing glasses in a pub, writing comedy sketches and embarking on a career-changing role in a major hotel before becoming established as a restaurateur, vigneron and ultimately – almost inevitably – as Australia’s most influential wine personality.

In 1979, Len wrote of a friend’s book, ‘It’s a funny book, it’s a serious book. It contains something for every wine lover.’ Few words could better describe what he has left us in Life’s Too Short to Drink Bad Wine.

‘There was, and will only ever be, one Don Bradman – and only one Len Evans AO, OBE.’ – James Halliday

‘[Len Evans is] the finest judge of wine I know.’ – Hugh Johnson

‘Len Evans has done more to advance the cause of Australian wine than any other individual.’ – The Oxford Companion to Wine
click to open popover

Rachel
5.0 out of 5 stars An amazing life.
31 October 2017
Verified Purchase
An interesting read. From humble beginnings he led a fulfilling life which guided the wine industry in Australia. I was lucky enough to have a long lunch at BP many many years ago. I will visit Tower Wines next visit to the Hunter now that I know it was Len's.
Read more
Helpful
Comment Report abuse
See all 1 customer reviews
Write a customer review
Get FREE delivery with Amazon Prime
Prime members enjoy FREE Delivery and exclusive access to movies, TV shows, music, Kindle e-books, Twitch Prime, and more.
> Get Started
Back to top
Get to Know Us
Make Money with Us
Let Us Help You
And don't forget:
© 1996-2020, Amazon.com, Inc. or its affiliates