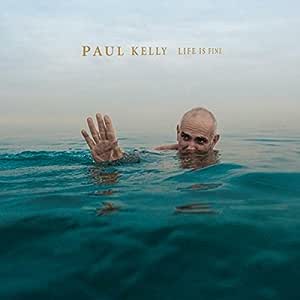 Paul new album ' Life Is fine' will be release on August 25th and will follow with tour dates throughout in UK , Europe Australia and USA Paul Kelly's fascinating and extraordinary career has spanned four decades, in which he has released over 20 albums. It's seen him revered as a songwriter and an exceptional lyricist - an Australian Dylan. Paul has won several awards, including ten ARIA Awards from the Australian Recording Industry Association (ARIA), and three APRA Awards from either the Australasian Performing Right Association (APRA) alone or together with the Australian Guild of Screen Composers. APRA named "To Her Door", solely written by Kelly,and "Treaty", written by Kelly and members of Yothu Yindi in their Top 30 best Australian songs of all time in 2001. Kelly was inducted into the ARIA Hall of Fame in 1997, alongside the Bee Gees and Graeme Bell. He has won six Country Music Awards from the Country Music Association of Australia, and four Mo Awards (Australian entertainment industry). David Fricke from Rolling Stone calls Kelly "one of the finest songwriters I have ever heard, Australian or otherwise."

Dr. Tim Parker
5.0 out of 5 stars Audio double-take time: a great CD!
Reviewed in Canada on 16 October 2017
Verified Purchase
I hadn't heard anything from Paul Kelly before this CD, but bought it on a recommendation. If there's such as thing as an audio double-take, I did it almost from the start of this CD. I intended to put it on while I read through some magazines, but ended up, from the first track, ignoring the magazine and listening. The double-take was because I could swear I was listening to a Bob Dylan CD, although one in which Bob could actually sing (no disrespect meant to Mr Dillon, but...)

The tracks here are varied, interesting, and fun to listen to. While most feature Kelly there's some additional artists here, too. Every track was a bit of a surprise, as I expect some "filler" tracks on a CD but to my surprise every track was well-crafted and entertaining. The engineering was a bit of a let down for me, as the sound is mostly left-right with little soundstaging at play, but then most people won't be listening on an audiophile's system, either.

OK, so I am really impressed, and will now order more of his CDs to make sure this isn't a one-off (I very much doubt it is). A lovely CD, one I am glad I added to my collection and a really cool discovery for me. Well done! Recommended...highly!

rogobu
5.0 out of 5 stars Buy this CD now!
Reviewed in Canada on 14 June 2018
Verified Purchase
One of my all-time favourite artists. This is as entertaining a set of songs as he has ever done. If you've had any exposure to him, previously, that should be all you need to know.
Read more
Helpful
Sending feedback...
Thank you for your feedback.
Sorry, we failed to record your vote. Please try again
Report abuse

Brindle is Best
5.0 out of 5 stars Best since Wanted Man
Reviewed in Canada on 31 October 2017
Verified Purchase
This is his best since Wanted Man. With a better band and great background singers. Huge Paul Kelly fan and I love it.
Read more
Helpful
Sending feedback...
Thank you for your feedback.
Sorry, we failed to record your vote. Please try again
Report abuse

crowman
4.0 out of 5 stars Big Jim
Reviewed in the United Kingdom on 17 April 2018
Verified Purchase
Another fine thing from the enigma that is Big Jim, a must see live but this recording will slate my thirst for a while.
Read more
Helpful
Sending feedback...
Thank you for your feedback.
Sorry, we failed to record your vote. Please try again
Report abuse
Load more international reviews

ATHANASIOS TZITZILIS
5.0 out of 5 stars Five Stars
Reviewed in the United Kingdom on 18 November 2017
Verified Purchase
THANKS
Read more
Helpful
Sending feedback...
Thank you for your feedback.
Sorry, we failed to record your vote. Please try again
Report abuse

Lou
5.0 out of 5 stars Five Stars
Reviewed in the United Kingdom on 14 August 2017
Verified Purchase
Brilliant! Paul Kelly at his best.
Read more
One person found this helpful
Helpful
Sending feedback...
Thank you for your feedback.
Sorry, we failed to record your vote. Please try again
Report abuse

Douglas R. Tooley
5.0 out of 5 stars Paul Kelly is superb form
Reviewed in the United States on 14 October 2017
Verified Purchase
Headphones for this one! You know an album is great when each song takes its turn as your favorite on the album over the course of a couple of months.
Read more
4 people found this helpful
Helpful
Sending feedback...
Thank you for your feedback.
Sorry, we failed to record your vote. Please try again
Report abuse

Jimmy
5.0 out of 5 stars This album is incredible!
Reviewed in the United States on 16 September 2019
Verified Purchase
I was completely unaware of Paul Kelly until I heard "Josephina" on internet radio. After listening to the rest of the album online I immediately bought the CD. The songs are perfectly crafted and instantly catchy with great hooks. Listen to Rising Moon, Firewood & Candles, Don't Explain, Josephina. Highly recommended for fans of great Aussie rock like Crowded House.
Read more
Helpful
Sending feedback...
Thank you for your feedback.
Sorry, we failed to record your vote. Please try again
Report abuse

Terry E Ford
5.0 out of 5 stars Award Winner
Reviewed in the United States on 2 December 2017
Verified Purchase
Paul and the "Life is Fine" record just won two ARIA awards (Australia Grammys) for best adult contemporary album and best male artist. Both well deserved. This is an incredible record that he played in entirety on this fall's US tour with a full band. Shame he is not more well known here.
Read more
One person found this helpful
Helpful
Sending feedback...
Thank you for your feedback.
Sorry, we failed to record your vote. Please try again
Report abuse