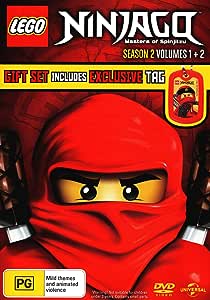 Nine episodes from the children's animation based on the line of toys by Lego. Set in the fictional world of Ninjago, the series follows a group of young Ninja who, under the tutelage of Sensei Wu (voice of Paul Dobson), are Spinjitzu martial artists in training, learning to wield their special Golden Weapons and use their unique elemental powers to protect the land from evil forces. The episodes are: 'Rise of the Snakes', 'Home', 'Snakebit', 'Never Trust a Snake', 'Can of Worms', 'The Snake King', 'Tick Tock', 'Once Bitten, Twice Shy' and 'The Royal Blacksmiths'.