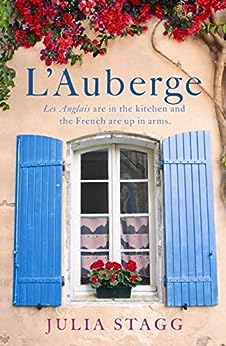 by Julia Stagg (Author) Format: Kindle Edition
See all formats and editions
Sorry, there was a problem loading this page. Try again.

Quelle horreur! The venerable Auberge des Deux Vallées has fallen into the hands of an English couple and that spells the end of gastronomic civilisation for the small commune of Fogas in the French Pyrenees.
The mayor is particularly incensed: he had intended his brother-in-law to take over. He determines to eject les rosbifs by any means possible, and before they have the chance to serve their first pastis, Paul and Lorna are up to their eyes in French bureaucracy.
But the mayor hasn't reckoned on the locals. They have their own reasons for wanting l'Auberge to succeed and they take the young incomers to their hearts. If they pull together, can they outwit the mayor or will l'Auberge end up in the merde?

Following in the footsteps of "Chocolat", this is an ideal holiday read. - www.beachtomato.com --This text refers to the hardcover edition.

Les Anglais are in the kitchen and the French are up in arms --This text refers to the hardcover edition.

Julia Stagg lives in the Ariege-Pyrenees region of France where she runs a small auberge and tries to convince the French that the British can cook. --This text refers to the hardcover edition.

Julia Stagg lives in the Ariege-Pyrenees region of France where she runs a small auberge and tries to convince the French that the British can cook. --This text refers to an alternate kindle_edition edition.
Read more

4.4 out of 5 stars
4.4 out of 5
200 global ratings
How are ratings calculated?
To calculate the overall star rating and percentage breakdown by star, we don’t use a simple average. Instead, our system considers things like how recent a review is and if the reviewer bought the item on Amazon. It also analyses reviews to verify trustworthiness.

Dr. P. Grubb
5.0 out of 5 stars Beautifully observed and written
Reviewed in the United Kingdom on 19 May 2013
Verified Purchase
This book came labelled as Joanne Harris meets Clochemerle. It's a long long time since Clochemerle and I can barely remember it, but I love Joanne Harris, so this had a lot to live up to. Did it make the grade? Yes, I loved it. The Websters, the English couple who fell in love with a small part of France and wanted to make it their future, find reality hitting them in the face with the minutiae of French politics. Papon, the Mayor, makes a superb baddie but he's a 3D person, not just someone to boo every time he steps on to the page. The various facets of village life play out beneath the often unseeing eyes of the Websters who struggle with everything from the language to building regulations. Each member of the cast brings his or her own surprises as the different strands of everyone's life weave in and around each other towards the denouement, but don't think you know what's coming - there's a wonderful final twist. It's beautifully observed and written, and I'm not surprised to learn that tourists go looking for Fogas believing it to be a real place.
And the icing on the cake for me was the cat called Tomate. A real Joanne Harris touch.

Kathrine reindel
5.0 out of 5 stars A feel good series
Reviewed in the United Kingdom on 29 July 2020
Verified Purchase
This is a great book, full of atmosphere. Scenery descriptions make you feel you are in the Pyrenees and the characters are interesting too. I learnt about the way communes are run....not the hippy type.
It made me want to read the next book in the series.
Read more
One person found this helpful
Report abuse

Mme Jennings
5.0 out of 5 stars Thoroughly enjoyable
Reviewed in the United Kingdom on 8 February 2013
Verified Purchase
From one who lives in France & has read many books of fiction and 'living in France' type books over the years. I really enjoyed L'Auberge. The characters I can relate too, though our Mayor in Coulonges is lovely & has helped my business (thank goodness).

There have been negative comments on Amazon about Paul & Webster's 'French' being translated into english with grammatical errors. I don't think this makes it hard to read & from someone who studies French every day, it made me chuckle, maybe it's too much of an in-joke for some? But when you live in France and you do your best to communicate on the spot, these are the mistakes newbies make. Annie's problems with her teeth were harder to work out on the page, but by rolling the words into one, you can imagine how it sounds, which must have been the point. I'm not a speed reader anyway, so it was ok.

I'm going to carry on reading the series & have signed up to Julia Staggs Facebook page.

If you like a light hearted story full of French character, this is the book for you.
Read more
3 people found this helpful
Report abuse

Kindle Customer
5.0 out of 5 stars Heartwarming Story
Reviewed in the United Kingdom on 30 September 2018
Verified Purchase
A well told story. Not my normal read but I couldn't put it down. So we'll written the story envelopes you and you get involved. Characters are all believable. Makes me want to move to France immediately. Excellent.
Read more
2 people found this helpful
Report abuse

La Kennedy
5.0 out of 5 stars Highly recommend, a must read!
Reviewed in the United Kingdom on 19 February 2014
Verified Purchase
I bought the first of Julia's books L'auberge, read it within 24 hours, so promptly bought the next 2. Bad news is I read them in a few hours!

Now I am waiting for her next book (April 2014). I rarely read light fiction, preferring slightly heavier historical (medieval ) novels, or historically academic books. I only dip into to light fiction when I am stressed. I am so pleased I found Julia's books. The characters are likeable and well formed and the stories a delight. In many ways there is a slight humour of MC Beaton and Joanne Harris . I highly recommend this as a lovely way to while a way a few hours
Read more
2 people found this helpful
Report abuse
See all reviews
Back to top
Get to Know Us
Make Money with Us
Let Us Help You
And don't forget:
© 1996-2021, Amazon.com, Inc. or its affiliates