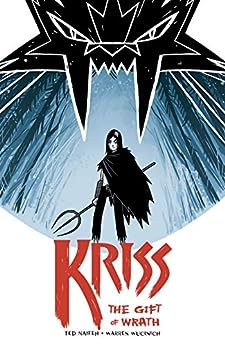 "A dark, violent fantasy recommended for those who enjoy coming-of-age stories and adventure."-- "School Library Journal" --This text refers to the paperback edition.

Ted Naifeh first appeared in the independent comics scene in 1999 as the artist for Gloomcookie, the goth romance comic he co-created with Serena Valentino for SLG Publishing. After a successful run, Ted decided to strike out on his own, writing and drawing Courtney Crumrin and the Night Things, a spooky children's fantasy series about a grumpy little girl and her adventures with her Warlock uncle. Nominated for an Eisner Award for best limited series, Courtney Crumrin's success paved the way for Polly and the Pirates, another children's book, this time about a prim and proper girl kidnapped by pirates convinced she was the daughter of their long-lost queen. Over the next few years, Ted wrote four volumes of Courtney Crumrin, plus a spin off book about her uncle. He also co-created How Loathsome with Tristan Crane, and illustrated two volumes of the videogame tie-in comic Death Junior with screenwriter Gary Whitta. More recently, he illustrated The Good Neighbors, a three volume graphic novel series written by New York Times best-selling author Holly Black, published by Scholastic. In 2011, Ted wrote the sequel to Polly and the Pirates, and illustrated several Batman short stories for DC Comics. In 2012, to celebrate the 10th anniversary of Courtney Crumrin, he wrote and illustrated the final two volumes of the series. Currently, you can find Ted everywhere: from the pages of Batman '66 to his newest original series for adults, Night's Dominion. Ted lives in San Francisco, because he likes dreary weather.

Warren Wucinich is an illustrator, colorist, and part-time carny currently living in Dallas, TX. When not making comics he can usually be found watching old Twilight Zone episodes and eating large amounts of pie. --This text refers to the paperback edition.

caleb
5.0 out of 5 stars Fantastic read that reacquaints the audience with the lost angsty teen in all of us
Reviewed in the United States on 9 October 2019
Verified Purchase
Kriss:tGoW being targeted at a younger audience may be writen at a late middle school/junior high reading level but dont let the deceptively simple writing/art style fool you, Kriss like all good "kids books" is operating on a much more sophisticated emotional level. tGoW is a poignant fun read with plenty of "hell yea" moments I'd recommend to every boy or girl who picks up a stick and swings it like a sword, and to the adults who still do when no ones looking. My only complaint is the maddening hints at what's to come, the sense that everything is so much bigger and this was an agonizingly small, myopic taste at what the journey of Kriss is about. I want more of the story and more of the world, and I want it now.
Read more
Report abuse
See all reviews
Back to top
Get to Know Us
Make Money with Us
Let Us Help You
And don't forget:
© 1996-2021, Amazon.com, Inc. or its affiliates