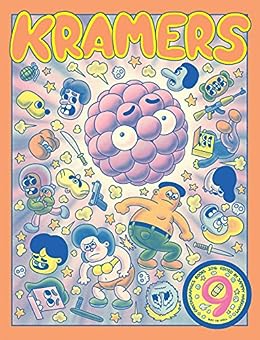 While previous issues of this groundbreaking comics anthology defined a generation of comics, this one presents some of the finest cartoonists from that generation...--Heidi MacDonald "Publishers Weekly" --This text refers to the paperback edition.

Kim Deitch lives in New York, NY, with his wife, the artist Pamela Butler. His books include The Boulevard of Broken Dreams, Shadowland, Alias the Cat, and The Search for Smilin' Ed!

Kevin Huizenga (b. 1977, Harvey, Illinois) has won awards for various comics and graphic novels starring his signature everyman, Glenn Ganges. His work has been featured in the Best American Comics anthologies and Time has named his books to their best of the year lists.

Michael DeForge (b. 1987) is a Canadian cartoonist who works on the Adventure Time animated series. Paste named his Twitter one of the The 75 Best Twitter Accounts of 2014, ranking it at #9. He's won the Doug Wright Award, and an Ignatz.

Sammy Harkham is an American cartoonist and editor, born in Los Angeles in 1980. He began making his own comics and created the zine Kramers Ergot, which has become one of the most influential comics anthologies published today. --This text refers to the paperback edition.

Alexi Zeren
5.0 out of 5 stars Phonebook Sized Cotton Candy
Reviewed in the United States on 26 March 2020
Verified Purchase
This book almost drips out of your hands when holding it due to the vibrant cover by John Pham.
Kramers does it again, this time with a super dense packed to the brim collection meditating on "War and Peace".
My favorite pieces were by Michael Deforge (though I was bummed it was reprinted story, it was amazing to see at this size), Sammy Harkham, John Pham, Kim Deitch, Anya Davidson, Al Columbia, and Lale Westvind.
A definite must have for fans of alternative comics, Kramers is the RAW of our day, don't miss out on owning a piece of history
Read more
Report abuse