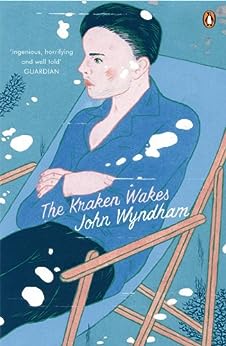 John Wyndham (1903-69) was a cult British science-fiction writer, best known for The Day of the Triffids. --This text refers to an alternate kindle_edition edition.

4.3 out of 5 stars
4.3 out of 5
453 global ratings
How are ratings calculated?
To calculate the overall star rating and percentage breakdown by star, we don’t use a simple average. Instead, our system considers things like how recent a review is and if the reviewer bought the item on Amazon. It also analyses reviews to verify trustworthiness.

The eponymous kraken is a sea monster from Scandinavian folklore.

The Kraken Wakes is an apocalyptic speculative fiction novel by John Wyndham, first published in 1953. It is very much the product of its time. The narrative is the backdrop mise-en-scène of the Cold War society. The outlook of the characters are often quite paternalistic, especially when any women are concerned, and some may find that attitude grating. A book reflecting the attitudes and conventions of the time it was written in. The main protagonists in this case are a husband and wife Mike and Phyllis, who are reporters.

Unlike the Trffids, the nature of the disaster comes on in phases and takes place over a period of about ten years, each phase becoming more and more detrimental to humanity. In parallel the Cold War begins to heat up as mistrust between the East and West believing that what is happening is an escalation in tensions, rather than it being caused by an unseen third party. It's an extra-terrestrial invasion. The first things that are seen are "red dots," of fiery shooting star landing in the deepest parts of the world's oceans, which are actually alien craft. It's ventured that they might come from gas giant planet and like living in high pressure environments and hence their need deep-water home, the book then gives over to a series of attacks by the aliens, they never called krakens in the book, climaxing in the scene that starts at beginning of the novel where rising sea water and icebergs in the Channel have entirely changed the weather and landscape of Britain isles, and where by the characters are trying to escape.

While some readers may find it frustrating - I like the idea that the aliens were never explained, or really shown, as everything about them is theoretical, except what they actually do, and there are lots of potential reasons for that. Some have said this novel is not one of the authors best - each to their own, however, for me this book is still worthy of a good 5 stars - after all how many alien invasion narratives, films and the rest show the invasion landing on terra firma with instant detriment to mankind. Dare I say the slow-burn nature of The Kraken Awakes, and the way you know there is trouble out there - but you cannot get to it, or see it makes this book so very interesting.
Read more
24 people found this helpful
Report abuse

Wildman
5.0 out of 5 stars Bizarrely strikes a chord with today
Reviewed in the United Kingdom on 17 February 2021
Verified Purchase
There is much in this dystopian tale that is similar to today. Parallels with climate change, science deniers, the effects of a global threat that closes down international travel and pins people to their homes. Obviously an airborne viral pandemic is radically different to an alien invasion, but the effect on a global population is very similar.

RazorGrrl
5.0 out of 5 stars Classic Apocalypse tale
Reviewed in the United Kingdom on 11 October 2017
Verified Purchase
One of the all-time greats in the genre of post war apocalyptic/environmental science fiction. I love John Wyndham, and have ever since I was a child. I remember first hearing of him when "Chocky" was on children's telly in the '70's, and the haunting, slow-moving, dreamlike and quintessentially English atmosphere affected me deeply. It opened my eyes to the world of speculative fiction, and I've never looked back since !

This novel is very much of its time, a fact that you really have to remember, otherwise the rather formal, slightly stilted characters and conversational style, may put some fans of post-apocalyptic fiction off. There's no zombies, no gore or gruesome detail, no blood and guts and no highly-coloured drama - just an astonishingly haunting, wonderfully atmospheric story, beautifully told, and a genre classic that ranks alongside - in my opinion - Neville Shute's "On the Beach", and Ballard's 'Nature'/environmental period, especially " The Drowned World " (which is not dissimilar thematically, but makes an interesting contrast stylistically and in terms of narrative and conclusions. I think primarily because one is an example of what Jeff Nuttall calls the pre-bomb generation, and the other (Ballard) is definitely a product of the post-nuclear generation)

Period preoccupations - primarily in this case post-war paranoia about the Red Menace - are displayed and lightly ridiculed. "the USSR would fight unswervingly for peace with all the weapons it possessed, except germs" is a great example of the sly sense of humour that permeates the novel, spoken through the mouthpiece of EBC reporter, Mike, who, with his wife, Phyllis, are the protagonists and narrators, after the event, of the crisis. The humour, in fact, is one of the things that make Wyndham's characters likeable, and real.

As well as Wyndham's dry wit, there's a sense of optimism running through most of his novels - a sense that science will ultimately save the day - which, again, is very much of its time. Something that contemporary apocalyptic fiction has definitely turned away from; however, in the context, it's rather comforting for a change !

Everyone who enjoys a good 'End of the World' narrative should absolutely read this, even if only for an insight into the continuum of the 20th century (the period after Jules Verne and Wells etc) 'hard science' dystopian novel.
Read more
5 people found this helpful
Report abuse

This was my first re-read - the second time I read it.

It’s a tad slow, by modern standards, but then I find most modern science fiction publications to be the opposite. So fast they miss out the stuff that makes the characters seem real.

Clearly some of the ‘fiction’ is now no longer fiction. We can send send remotely controlled drones down to the deepest parts of the seas, and when this was written doing so was as impossible to even imagine.

The basic premise holds true. If aliens did invade the subterranean trenches of the seas we would still be hard pushed to defend against them. The Number of submersible craft that can go that far down can probably be counted in single digits.

Overall, I liked it a lot first time round, and still it. Time for ‘the trouble with lichen .’
Read more
Report abuse

Squeaky Joe
3.0 out of 5 stars Not one of Wyndham's better books
Reviewed in the United Kingdom on 20 July 2019
Verified Purchase
After a series of fireballs rain down from the sky, crash into the oceans of the world and ships begin sinking mysteriously, two journalists, who experience the strange phenomenon from aboard ship, relate the story of the alien ‘invasion’ and humankind’s struggle to survive.

Though I’m a big fan of John Wyndham, this one really didn’t grip me at all. After the initial excitement of the aliens’ arrival, the first half of the book tells the story through a series of meetings, broadcasts and reports, detailing how the bizarre beings initially don’t seem to do very much, but then gradually launch a kind of assault, sending out ‘sea-tanks’ to capture people from coastal communities.

The latter part of the book, where the icecaps begin to melt and sea levels rise, is more interesting, but if it hadn’t been written by Wyndham, I’d have given up.
Read more
One person found this helpful
Report abuse
See all reviews
Back to top
Get to Know Us
Make Money with Us
Let Us Help You
And don't forget:
© 1996-2021, Amazon.com, Inc. or its affiliates