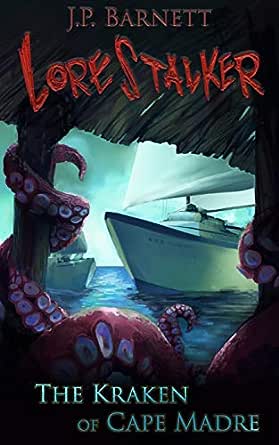 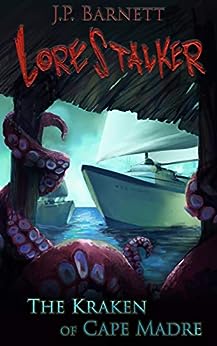 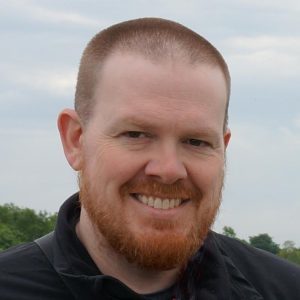 Spring break will never be the same after a legendary creature rises from the depths.

"This book flew by while I was reading because of its intense page-turning quality... The monsters, myths and historical aspects which Miriam uncovers are the hallmarks of any great seafaring adventure, adding lots of atmosphere as the darkness and tension of the tale builds up. Along the way, the real power of the horror novel kicks in more and more, and what might seem like a slow burner soon becomes an inferno of action, terror and frightening realities revealed." ~ Readers' Favorite Book Reviews

It’s been almost two years, but the nightmares still haunt Miriam Brooks—grisly images of her brother being slaughtered. A relaxing Spring Break at the beach seems like a good way to put some distance between her and the troubling past, but paradise shatters when she saves a tourist from something lurking beneath the waves.

Soon, she’s on the trail of a sea creature from the legends of Vikings and Pirates. The fishermen of Cape Madre tell tales for the right price, and Miriam quickly learns of a string of disappearances all related to this mysterious monster.

The cops and the coast guard are meant to handle the crimes of men, but Miriam’s been trained to find the creatures of lore—creatures like this. Pulled back into the life she wants to forget, Miriam is the last line of defense between man and myth.

EDITOR: A writer since age six and a professional one since nineteen, my initial editing experience came in the swarms of prose I pumped out into the world, only occasionally into the world of actual magazines, anthologies or e-zines. Soon, as I began selling more regularly, and as publishers took note of my longer works, I began freelance editing. I've edited screenplays, memoirs, novels, children's books and, would you believe it, epic narrative poetry. One of the novels I edited, "Under the Tamarind Tree," was shortlisted among nine others for the 2014 Dundee International Book Prize. A charter member of The Greater Los Angeles Writers Society (GLAWS), I am also the managing editor of the organization's official publication, Literary Landscapes, which features stories, excerpts, articles and poetry (see issues here). In addition, I belong to the editing collective Write For Success, for which I perform manuscript critiques and consultation. As an author, I have published nine novels and almost fifteen short stories.

Matt Kosub
5.0 out of 5 stars Excellent sequel in the series. Reminds me of Michael Crichton.
10 September 2019 - Published on Amazon.com
Verified Purchase
This is the second book in the Lore Stalker Series and it is the best one yet. The author did another fantastic job with coming up with a great plot, kept the story moving along at just the right pace and then finished the book with a really great ending that made me wanting more books out of the series. Since this is the second book in the series, I have a better appreciation of what this author is capable above, and, I must say I plan on reading everything in the Lore Stalker series from here on out. I'm hooked. The characters are deep and meaningful and you feel attached to them, even more so now since this is obviously part of a wider story arc. I love seeing how Miriam, Macy, and Tanner are all developing along with their idiosyncrasies which make them even more human and more interesting. The Lore Stalker series reminds me of all those Michael Crichton books I tore through as a teenager and it's easy to see why. Each story and creature starts out mystical but then is quickly explained by science as the characters find out more about the creature's origins, and, I have to say I really love that. I've been looking for books like Michael Crichton's and I think I found just the series.
Read more

LIR
5.0 out of 5 stars An exciting tale, well told
31 December 2019 - Published on Amazon.com
Verified Purchase
I thoroughly enjoyed this book, in every sense. I found the story engaging and fast paced, and I couldn't wait to see what happened next. The characters were interesting and relatable, especially Miriam, and by the middle of the book, I felt like I actually knew them.
I generally read literary fiction, but my experience with this book has made me want to read more along these lines, and I am looking forward to reading the next entry in this series.
Really highly enjoyable. I give it my highest recommendation!
Read more

Michele T
5.0 out of 5 stars A MUST READ second book in the Lorestalker series!!
5 June 2019 - Published on Amazon.com
Verified Purchase
The Kraken of Cape Madre was a fast-paced book I did not want to put down, but hated when I finished it, because I just wanted more Lorestalker books to read by JP Barnett. It is extremely well written with clues along the way that you only see in retrospect - the best kind of suspense/mystery/horror thriller (I think it truly sits in all 3 genres). The characters are well-developed, but the book is full of action - a somewhat difficult feat to accomplish. I am very impressed with how I can love and empathize with some of the characters, while also hating their cruel actions, which explains itself in an unexpected twist! All in all a great read, and I can't wait to read the next book in the series! Keep them coming!
Read more

Ellee
5.0 out of 5 stars Book 2 in the Series - Better than the first!
7 July 2019 - Published on Amazon.com
Verified Purchase
I enjoyed reading the first book in this series, but this one - Wow! I didn't want to put it down! This book was a fast paced, with easy flow and natural dialog that made for easy reading. I enjoyed Miriam's strengths and humbly endearing weaknesses. She is a character I am becoming very attached to and look forward to cheering on. The suspense in this book had my stomach in knots at times and I couldn't turn the pages fast enough, even though I was nervous to do so! I am very much looking forward to more books from this author.
Read more

R. Weeks
5.0 out of 5 stars A great read
31 May 2019 - Published on Amazon.com
Verified Purchase
Barnett's second book is definitely as good as his first. His writing style is reminiscent of early Stephen King or Robert R. McCammon; almost streamlined in a way to introduce multiple characters, lay out the plot, and get to the fun. That's not to say he doesn't flesh out the characters and their world...or the monsters that inhabit that world. This one is a page-turner, for sure!
Read more
Go to Amazon.com to see all 19 reviews 4.9 out of 5 stars
Get FREE delivery with Amazon Prime
Prime members enjoy FREE Delivery and exclusive access to movies, TV shows, music, Kindle e-books, Twitch Prime, and more.
> Get Started
Back to top
Get to Know Us
Make Money with Us
Let Us Help You
And don't forget:
© 1996-2020, Amazon.com, Inc. or its affiliates