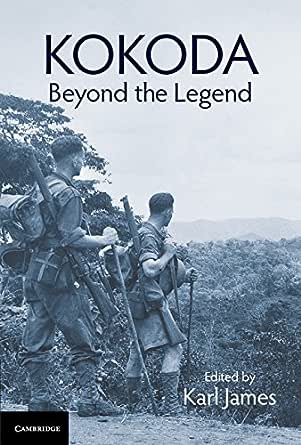 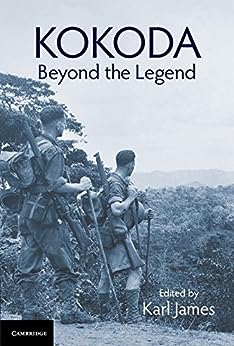 Kokoda: Beyond the Legend Kindle Edition

In this book, Karl James brings together eminent military historians from Britain, the United States, Japan and Australia to reassess the principal battles from both Allied and Japanese perspectives, providing readers with a more complete understanding of one of the major turning points in the Second World War. --This text refers to the hardcover edition.

Kokoda: Beyond the Legend provides readers with a complete understanding of this major turning point in the Second World War. --This text refers to the hardcover edition.

Karl James is a Senior Historian in the Military History Section at the Australian War Memorial, Canberra and a Departmental Visitor with the Strategic and Defence Studies Centre at the Australian National University, Canberra. --This text refers to an out of print or unavailable edition of this title.
Read more

3.9 out of 5 stars
3.9 out of 5
2 global ratings
How are ratings calculated?
To calculate the overall star rating and percentage breakdown by star, we don’t use a simple average. Instead, our system considers things like how recent a review is and if the reviewer bought the item on Amazon. It also analyses reviews to verify trustworthiness.

H. Lim
3.0 out of 5 stars Problematic book that is unsure of what it is.
Reviewed in Australia on 1 July 2020
When I read Peter Williams's revisionist book "Kokoda Campaign Myth And Reality" which was published in 2012, I knew it was a game changer. Williams's book argues that the Australian achievement during the Kokoda Campaign is less impressive than is traditionally thought, largely because the idea that the Japanese consistently outnumbered the Australians is demonstrably untrue according to Japanese documentation.

First up, the book is pretty shoddily copy-edited. There are errors all through the book, which admittedly is very nicely bound. We are told that the Axis powers were "accented" rather than "ascendant" in 1942; and there are spacing issues following many full stops; and typing errors and malapropisms all over. For a book that cost this much I would expect more care.

The book sets up one unconnected, short narrative history after another. And I do mean narrative; and I do mean short. The first article, by Antony Beevor, is literally a summary of the entire Second World War up until the commencement of Kokoda in July 1942. Is this really necessary? We then get an American author who seems at least to have a novel thesis, that a US Admiral, following the Battle of the Coral Sea, feinted westward on his way back to defending Midway. This feint tricked the Japanese into thinking an incursion into the Southwest Pacific was imminent. Is this really that interesting in a book ostensibly about Kokoda?

At least this is an actual thesis. We find narrative histories of the Battle of Guadalcanal and Battle of Milne Bay that appear to attempt nothing new. If you are familiar with these actions you are familiar with these articles. The Buna campaign is more interesting, since at least some new material on the relationships between the commanders is put forward, but I can't help feeling that even this is surplus after reading Brune's book. The article on command failures on the Kokoda track is at least more meaty, and finds something interesting to say about the maneuvers around Ioribaiwa.

I cannot comment much about the air warfare article, since I know little about this subject; I did enjoy this gripping narrative, but again not sure if there is any novelty here.

The "Japanese perspective" articles are pretty interesting. Williams pops up here, basically summarising his book's conclusions. Here I note he strikes a less confrontational tone; the word "myth" never occurs. The article about the Japanese commanders on the Kokoda Track is very interesting to me; for one singular reason. The Japanese author emphasises the horrific situation of the Japanese army by the time they reached Ioribaiwa. He quotes the 1950s era memoir of Major Koiwai Mitsuo, who describes Maj-Gen Horii saying that he still intended to advance to Port Moresby that morning, but that seeing hungry Japanese soldiers near a nearby stream had convinced him that they could go no further.

Hang on a second. One of the mainplanks of the Williams thesis is that the Japanese changed their minds about capturing Port Moresby, and that Horii received the message during the Battle of Isurava. The idea that Moresby was even threatened by the time of the Battle of Ioribaiwa is deemed by Williams to be part of the "Kokoda Myth". I looked through the Williams book again very carefully; the idea that Horii still wanted to capture Moresby at any time after Isurava is not mentioned at all.

I can only come to one conclusion; that Williams knew about Koiwai's memoir and its indication that Gen Horii still wanted to advance to Moresby after the Battle of Ioribaiwa. but that Williams suppressed this data in order to "sharpen up" his thesis. No doubt Williams would argue that Horii was just bluffing, or saving face, or that Koiwai was lying. However, he should do that in his book, and not leave things out on purpose.

Once you find one questionable argument you are on the lookout for others. On looking further at Williams's article in this collection, it strikes me that his methodology is a bit strange. In order to "sharpen up" his thesis that the Australians were not outnumbered at almost any of the Kokoda battles, he has been obliged to include in the Australian figures all noncombatants such as medical staff. Yet he blatantly leaves out Japanese combat troops who attempted to outflank the Australians through the jungle, got lost, and were never engaged. Therefore, riflemen who attempted to attack the Australians but got lost do not count towards troop numbers, but medical staff and cooks who never picked up a rifle do. This seems somewhat strange to me.

I have not yet reread Williams's entire book yet with a closer eye on this point, but I may do so in future.

The article about the modern state of the Kokoda Track is pretty annoying in many ways. The writer, clearly conservative, regards the use of the term "track" as politically correct and disrespectful to the fallen. Yet the editor of the collection specifically says in the introduction that both "track" and "trail" are equally acceptable, and that the word "trail" has been chosen for convenience throughout the book. Why is it suddenly not OK to use both? The author also pillories anyone who dares to use the Kokoda Track for anything other than a war memorial, chiding those who trek it "to have an environmental levitation or assume the role of a Mahatma Ghandi" [sic, another typographic error].

It is a shame this author writes this way, because he has by far the most interesting thesis in the book. From what he says, the state of the Kokoda Track is indeed a matter for concern, with corruption, feckless bureaucracy and ignorance of history cheapening and shoddying up the locations of these battles in the name of the tourist dollar.

The most technical article in the collection, about the Australian army's effective use of feedback to improve itself in jungle fighting throughout the war, is also really interesting. Many armies through history have been too hidebound to update themselves when technology changes; a lesson for many modern armies here I think.

This book is quite problematic. A majority of the articles are short narrative pieces; too short to be comprehensive, and not novel enough to be of interest to historians. If you pick up a book of short articles, each one had better be an interesting, new and well argued thesis. Otherwise you just have a jumble of poorly connected stories better told elsewhere.

If you are just getting into the Kokoda Campaign and would like to get in at the latest findings, I would rather recommend Nicholas Anderson's "To Kokoda", even if I wish it were a bit longer, and Peter Williams's "Myth And Reality", though the latter now with a pinch of salt I think. Then read Peter Brune for colour.