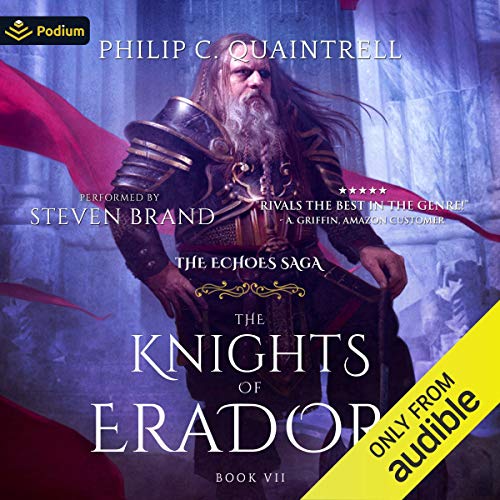 The Knights of Erador: The Echoes Saga, Book 7

Fifteen years of peace are about to end.

Something is coming. Shadows gather. Whispers of rebellion have reached the king. Darkness stirs beyond Illian’s borders.

Beyond the mountains, Dhenaheim has lost a quiet war. Refugees pour into Illian, bringing suspicion and unrest. For Doran Heavybelly, Dhenaheim's war means facing a personal tragedy that demands his attention...and his axe.

A simple job for too much coin should have been warning enough for Asher, but, like Fate, trouble always has a way of finding him.

Conspiracy. Rebellion. Betrayal. Time to find out who the real heroes are.

4.7 out of 5 stars
4.7 out of 5
571 global ratings
How are ratings calculated?
To calculate the overall star rating and percentage breakdown by star, we don’t use a simple average. Instead, our system considers things like how recent a review is and if the reviewer bought the item on Amazon. It also analyses reviews to verify trustworthiness.

Fantasy Reader
5.0 out of 5 stars Just keeps getting better and better...
Reviewed in Australia on 29 March 2020
Verified Purchase
What a great series The Echoes Saga has been so far. Really enjoyed the first 6 books, but book 7 blew me away. The author's ability to not only make each character unique, each with their own traits that you do and dont like about them, but to then also jump 15 years and have you instantly envision them as being that much older, is writing at its very best.
The only downside to finishing this book is that it has left me in "mourning" - that period where you feel lost without the book's characters in your life, and no book you pick up next will hold your interest. Few books do this to me, but this one certainly did.
I cant wait for the next one.......
Read more
One person found this helpful
Helpful
Report abuse

Amazon Customer
5.0 out of 5 stars Never fails to deliver.
Reviewed in Australia on 15 September 2020
Verified Purchase
The humour is spot on, the battles and fights are descriptive and exciting, the characters are relatable and interesting and the story is simply excellent. What could have been just another blah blah blah sword and sorcery series is so very much more. What more can I add? If you aren’t reading the series you really should.
Read more
Helpful
Report abuse

Deb - Amazon Customer
5.0 out of 5 stars Another fantastic adventure
Reviewed in Australia on 29 March 2020
Verified Purchase
This writer never disappoints! This is the 11th book of his that I have read and he can’t write quick enough for me.
The story is a little predictable but I know he will throw a curve ball that I won’t see coming and all my smug “I know what’s going to happen” will be thrown out.
The characters are so relatable, the elves, dwarves, mages, drakes, humans and dragons. Even though I am missing my favourite character and my other favourite character has joined the dark side, I will continue the journey this writer has created.
Read more
Helpful
Report abuse

Kindle Customer
5.0 out of 5 stars You need to read this book!
Reviewed in Australia on 2 April 2020
Verified Purchase
This book is another masterpiece in this amazing series. If you're a fan and have been following this series, then don't hesitate, stop reading this review and buy this book! If you have only stumbled across this book, do yourself a favour and start from book one and strap yourself in for a wild adventure. I cannot recommend this author or series enough
Read more
Helpful
Report abuse

kathryn lowe
4.0 out of 5 stars Another entertaining read
Reviewed in Australia on 27 March 2021
Verified Purchase
I always enjoy the books in this series because the characters are true. You know what they are going to do and they don't disappoint. It makes for a calm yet entertaining read and keeps me coming back.
Read more
Helpful
Report abuse

lizy
4.0 out of 5 stars Great read
Reviewed in Australia on 14 April 2020
Yet another great book for this saga.
You will enjoy book 7 and I especially enjoyed the huge twist in this storyline. I actually felt like crying at one point.
My only negative is I wish the books were bigger.
Read more
One person found this helpful
Helpful
Report abuse

Jacquib52
5.0 out of 5 stars Engaging mega saga
Reviewed in Australia on 9 March 2021
I started this saga in the covid lockdown in Melbourne 2020. I often have several books on the go but this saga kept me focussed on rangers, elves, dwarves etc. The characters are complex yet believable in such a wide ranging fantasy & I can't help but wonder where the story is heading. A saga worthy of the name. I recommend this for all.
Read more
Helpful
Report abuse
See all reviews

Liz Dixon
5.0 out of 5 stars Brilliant
Reviewed in the United Kingdom on 26 June 2020
Verified Purchase
As this is book 7 of this series, I doubt that anyone wanting to read this one without having read the others! If you have just randomly found this title I urge you to go to the beginning and read them in the correct order.
This is a well written series, with a wonderfully drawn cast of characters that you will love and hate but they are all 3 dimensional and do grow and change throughout the epic story of this complex world.
I would recommend that you read the whole series, each book has much to recommend it and the plot arc is huge.
I only have one criticism, that Philip C. Stairwell can't write then as fast as I can read them. Once all mine books are available I will have the pleasure of rereading the whole history of the world in their entirety.
Read more
Report abuse

Mitch
5.0 out of 5 stars The World is Growing!!!
Reviewed in the United Kingdom on 27 April 2020
Verified Purchase
I have been devouring this series since November 2019. Five months later, and I can only consider how lucky I was to find this author. After reading the Terran Cycle (another great series by Philip), I started The Echoes Saga a bit reluctantly since I'm not a big fan of Fantasy. 7 books later I can only say that I'm craving for more. I now want a big poster with the map of Verda on It. I want my Asher's Coffee Cup, and I want to go to my Verda Universal Studios Park with its own version of the Pick-Axe. This Series is amazing and deserve a lot more coverage. Just knew that it sold more than 300,000 copies. That's a well deserved achievement, and I sincerely hope that Philip keeps nurturing this series and continue doing a great job with the characters. Waiting for the next adventure...
Read more
One person found this helpful
Report abuse

Andrei Ungurianu
5.0 out of 5 stars I can't believe a book so cheap is so GOOD
Reviewed in the United Kingdom on 29 May 2020
Verified Purchase
It has good character development and it keeps you hooked in for hours, never a dull moment. Great fantasy world if a little predictable. The thing is, after a few hundred books read there's little that you can regard as "unpredictable" but that is a matter of perspective.

If nothing more, I hate long reviews the essence of my post here clear I hope: get the series, read it all and wait for the movie :D
Read more
One person found this helpful
Report abuse

Mr. Steve M
5.0 out of 5 stars The beginning of the end ... or the end of the beginning? ...
Reviewed in the United Kingdom on 12 July 2021
Verified Purchase
... Depends on whether you are reviewing from Alijah's perspective or not. Lots of twists and turns with several strands woven together as the heroes form unexpected allianes against a surprising enemy. I noted a few typos in the Kindle text (baron for barren was unexpected) but not many at all and nothing to detract from the well-written tale of magic and intrigue.
Read more
Report abuse

Amazon Customer
5.0 out of 5 stars Fantastic fantasy series
Reviewed in the United Kingdom on 14 August 2020
Verified Purchase
You can tell how much I rate this series as I am now on book 7 of 9 and have been reading them back to back. The books hit all the right notes with a believable world, great characters and fascinating plots and sub-plots. You become very attached to the main characters and what happens to them. The stories have their roots in Tolkein with Elves, Orcs, Dwarves and Dragons, but the author has then built on that so it all seems new and fresh and exciting. I look forward to continuing reading the series and then will move on to the prequels! A great series, and would certainly could be made into great television/movies too. Highly recommended.
Read more
Report abuse
See all reviews
Back to top
Get to Know Us
Make Money with Us
Let Us Help You
And don't forget:
© 1996-2021, Amazon.com, Inc. or its affiliates